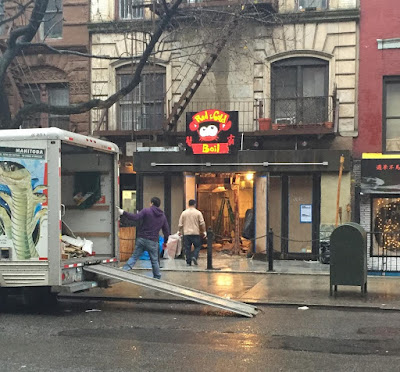 Workers have been gutting the former Red & Gold Boil at 30 St. Mark's Place between Second Avenue and Third Avenue.

And a familiar name will be taking over the space: Mamoun's Falafel. 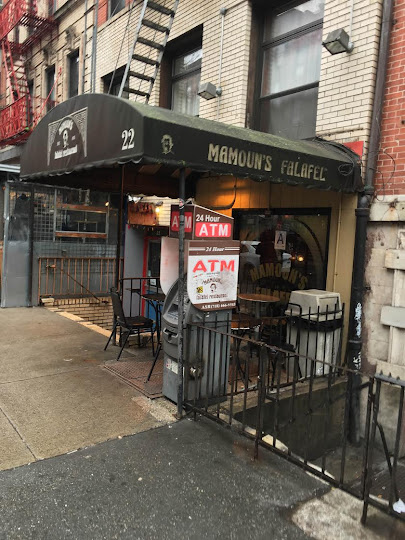 EVG correspondent Steven got confirmation yesterday that Mamoun's will be relocating here from its current location a few storefronts away at No. 22 this coming spring.

Red & Gold Boil closed after 13 months in business in early October. The previous tenant, Japadog, had a better run with 25 months in operation.

Previously on EV Grieve:
Breaking: Japadog is closing for good after tonight on St. Mark's Place

As someone who ate at Red and Gold boil, I am NOT surprised they crashed and burnt. Only astonished at how long it took. The other day went o Luke's Lobster for lobster roll was astonished they now use mayo and not hot butter and found some crunchy pieces in the lobster from the shell. Even having a hot product does not mean continued success if there is a devaluation in quality control.

This is great news, Mamoun's gets lots more seating both inside and out so we don't have to stand up at the counter, and a nice upgrade to boot. Glad to see a local business expanding instead of yet another concept foodie place.

I was on MacDougal Street last week and Pomme Frite's new location is still not close to opening. The store is being gutted but there is no sign of when they might open. Does anyone know what's happening? Meanwhile the frites place that is on now St Mark;s is usually empty, as even the tourists seem to know it's not the real thing.

Luke's has always used mayo and not butter. Red Hook Lobster Pound has a choice of butter or mayo.

good there will be more room in the new place..love their falafel.
Melanie
East Village Corner

Good to Mamoun's surviving and even expanding. Loved Luke's for NOT using mayo. Shame.

Hey San Loco what's your aversion to opening a location west of Broadway between Houston and 14th Streets? Such a great local brand with absolutely zero ambition.