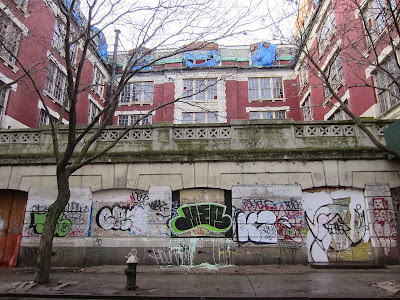 Developer Gregg Singer, who has spent nearly 18 years trying to convert the former P.S 64 and CHARAS/El Bohio community center into student housing, is now reportedly being sued by his investors.

The Real Deal has the scoop:

Investors in the long-stalled redevelopment of the former PS 64 in the East Village are trying to force the building’s sale, claiming their partner is bleeding them dry to line his own pockets with management fees worth $30,000 per month.

A trio of financial backers led by Los Angeles-based Onyx Asset Management is asking a judge to boot developer Gregg Singer as manager of project, alleging several conflicts of interest that have led to him “wasting and dissipating the assets” of the partnership, according to a lawsuit filed in Manhattan Supreme Court Wednesday.

The asset manager said it and the other investors put almost $8 million worth of debt and equity into the project, and after paying off the defaulted mortgage the development partnership took out a $22 million bridge loan at 11 percent interest, guaranteed by Onyx.

Despite earlier reports that Singer had signed the West Village’s Ballet School as a tenant, however, progress at the site struggled, and in July the company defaulted on the loan, kicking the interest rate up to 16 percent.

Singer bought the formerly city-owned building on East 9th Street between Avenue B and Avenue C in 1998 for $3.15 million. There has been a movement to return the building to use as a cultural and community center.

By any measure it is time for the city to take back the property. The East Village today is not the East Village of twenty years ago. since this is a Land marked building restore it to its original use a school. The Village has been growing with families and will continue to grow school space is desirable for this neighborhood.

Completely agree - Giuliani gifted this school building to this investor over the objections of the neighborhood.
A school would be a perfect use for this building

Perhaps we should take your building and property and convert/use it for a school.


There is something romantic about it becoming a dormitory for ballet and other art and music schools. A touch of Wes Anderson. Back to reality though, hope this guy gets the boot. The building even in its current state is quite striking and deserves to be a home to something.

gee
an empty building that was designed as a school?
what on earth can we do with it?
what could we use here?
what would be the most sensible use?
perhaps a school?

no, too logical for government folks to even consider.

how about instead of replacing the school we replace the elected officials!

there is a burgeoning young population in the east village----WE NEED SCHOOLS :)

It is so nice to hear that real-estate investors have finally been burn by their own creed. So the rich can bleed after all.

I can't believe there's such a debacle over what was once a school when the obvious solution is to rebuild it and keep it a school.

It was gutted a few years back so any use, school etc ... , would require extensive construction. Watch this sold to some developer less nuts than Singer who immediately makes a deal for some percentage of "affordable" housing.

This building was given by Giuliani to Singer at the request of then-city council member (and Giuliani paramour) Antonio Pagan, who severely disliked the group who held the long-time lease on the former school, which, truth be told, they did not share with the community very much. Singer was given a sweet deal that included some form of financing from the city, which is unheard of in auctions of city-owned properties.

The city can RESCIND that tainted sale and restore the building to its intended use as a school and community center.
If necessary, the city can use its power of eminent domain, as it did when it took a row of privately-owned buildings along Eighth Avenue and GAVE the parcel to the NY Times to build its new headquarters.....

Great idea! It would be cheap to purchase and renovate considering the cost of a new building.

@Michael Ivan: However "romantic" it may seem, I don't think the Joffrey Ballet School actually needs dormitory space. Somehow the Joffrey has been functioning all this time without Gregg Singer.

Needed a nice picture of RATS SCURRYING with this post.

CHARAS has been requesting all along that it be returned to the people of Loisaida to use as a community center, which it was for over 10 years. The group of former gang members originally called themselves "The Real Great Society" in a nod to LBJ's Great Society, but then formed the acronym CHARAS using the initials of their names. (Obviously, there were six of them.)

Yes, considering that this was built as a public school that was attended by Yip Harburg—lyricist for Somewhere Over the Rainbow—among other luminaries—it's kind of a no-brainer to make it a public school again. I'd vote for a community center, however; when CHARAS was located in this school building, it provided rehearsal and studio space to local artists, and when the auditorium in the basement was renovated, it also provided performance space.

The pool in the basement of the Christodora House remains closed and unused specifically because of a provision that states it must be available to the community—which included the boys and girls of P.S. 64, when it was open. (The Christodora House—which was a settlement house then owned by the Department of Welfare—and P.S. 64 were connected by the pool.)

Why delay Squat today people not profit. When is a class action suit challenging the saga of the swim issue being herd

Details about Onyx Asset Management, LLC can now be found on the onyxassetmanagementllc.com website