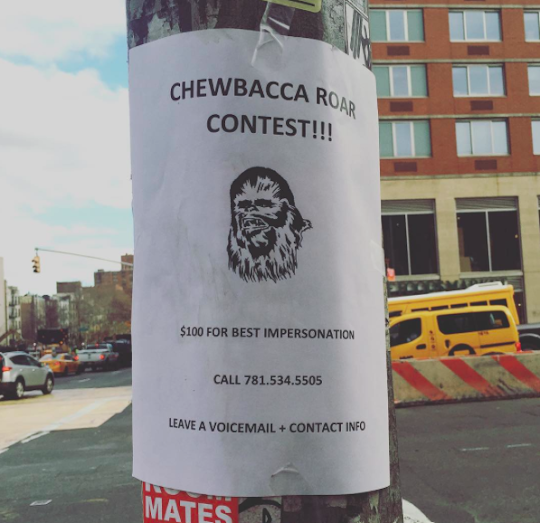 Perhaps in time for the premiere of "The Force Awakens" ... flyers announcing a Chewbacca Roar Contest have been spotted around... this one is on the Bowery at East Houston.

Apparently these flyers are a staple on or near April Fool's Day in various cities and states... calls to the the number in suburban Boston on this flyer eventually lead to a voice-mail where there isn't any mention of a Chewbacca Roar Contest.

This was on Reddit a while back. Guy posted it with his ex-girlfriend's phone number to blow up her phone with Chewbacca impressions. Kinda funny, actually.

Just came from a Thursday night 11 PM showing of Star Wars: The Force Awakens at the Regal (nerd alert!), and I got to hear Chewie roar. A lot. Yes!