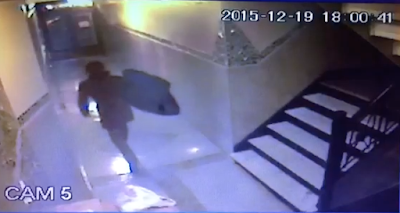 A resident who lives on East Third Street between Avenue A and Avenue B shared this surveillance video with us ... it's from around 6 p.m. on Saturday. The video picks up the man entering the building, taking a look around, then helping himself to all the packages by the mailboxes in the lobby.

There have been multiple package thefts from this one building. (Someone has routinely hit the buzzers seeking access in the evening.)

We understand that the NYPD is on the case.

From an EVG reader... management from a building on East 11th Street between Avenue A and Avenue B sent residents a photo of the man who surveillance cameras show taking two packages from the lobby. He allegedly did this after delivering another package to the address. 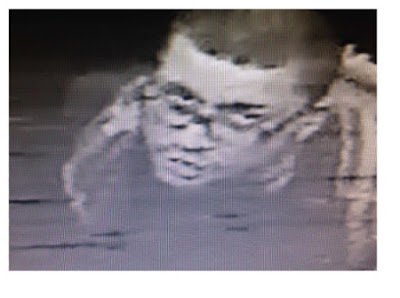 Previously on EV Grieve:
Watch this man help himself to packages from an East 7th Street lobby

Another report of stolen packages from an East Village lobby
Posted by Grieve at 4:30 AM

Email ThisBlogThis!Share to TwitterShare to FacebookShare to Pinterest
Labels: package thief, you're a mean one Mr. Grinch

And some Meghan probably buzzed him in.

OF course this sucks but where do people think they live in a doorman building on the upper east side? Another reason people are paying too much rent in the EV, a false sense of safety for themselves and their possessions.

I had so many of my packages stolen out of my building that I had to arrange for an alternate pickup location for my UPS deliveries. S.O.L. for anything coming from the PO, tho. Hope they catch this scumbag soon.

This is what happens when people randomly buzz others in and let people in without questioning them. If they know someone in the building, they should ring them. If not, don't let them in.

Since some people will always steal loose packages dumped in lobbies, landlords need to install package lockers which many buildings use to prevent theft. The package is locked inside an oversized locker, and the locker key is put into your mailbox.

Just because the lobby door is locked doesn't mean an outsider won't figure out how to get in, they can just pose as a delivery guy and ring every buzzer. Otherwise have your packages delivered to a local store and be willing to pay extra for the service.

Christmas is time for giving AND receiving!

My baby stroller was stolen from the building, so when I bought a new one, I had to bike-chain it to the stair railings. Same hood.

Have had packages stolen 3 or 4 times.

A few times, it was LaserShip doing the "last mile" delivery. Their drivers don't give a shit, don't do delivery confirmation, don't even attempt to ring the bell to see if someone is home, and, frankly, may well in fact be the culprits behind the thefts. (That update above said the suspect in the screen cap had been in the building to make another delivery, so...)

The other time, it was a USPS First Class mail package. Around the holidays. My wife's aunt sent her a box full of her baby pictures. Wrapped in brown paper. Tracked it to the NYC sorting center. Just never made it to our place after that. Fucked up.

If anyone is sending you a package, make sure they add insurance, tracking, delivery confirmation/signature, etc.

Lasership is the WORST!
I'll be home and they don't even buzz my door, they just leave it by the front door.
I don't know why companies have been using them - I've twice had to have companies replace what was supposedly left at my front door by Lasership, when they didn't even bother buzzing.

And yes, the problem is people who buzz people in.
It's the temporary neighbors who don't give a shit or understand anything or nyc.

As someone that lives on the first floor of a building, I can not STAND anything bike chained in the stairwell. Inevitably, it's in the way and hey - what do you care, right - you go upstairs with your brood and leave me to trip my way to my door.

If it wasn't Meghan, I bet it was Ashlee, or Ashleigh, or Ashley, or Aschle.

I agree with 4:14, about the commenter who said she chains her stroller to the railing, leaving stuff in common areas like that is really not thoughtful to other people in the building. Also possibly a fire hazard. Maybe she doesn't realize it and will see this and reconsider this habit.

To 4:14 p.m., the person who lives on the first floor and has to deal with a bike chained to the stairwell: Complain to your landlord. It is illegal to affix bikes, strollers, anything to stairwells on any level of the building. The reason is if there is a fire, the items can impede getting through the hallway. So call your landlord. The super should remove the item immediately. If not, call 311. It isn't only an inconvenience. It is dangerous to have all that stuff clogging up the hallways.

Had something stolen from 2nd Street between A&B yesterday too. Sigh.

Just chased this guy out of my building on 13th & B. Just got home, was on the 2nd floor landing, there were packages at the mailboxes visible from the front door, and I hear all the buzzers being rung. Just read this EV Grieve post, so I was suspicious. Walked down to check my mail so the guy walks right by me. I start back up the stairs behind him. He sits down after the third landing and pretends to talk on his phone. I walked past him and then back down. I stand by the mailboxes and play "I am on my phone." He walks by and leaves the building empty handed. I rewetted the EV Grieve footage, and it was him! Same hat, thin facial hair & blue laundry bag. He was Latino, 5'7" mid to late 40's. He left and walked south on ave B at approx 5:05 pm Tuesday 12/22/15.

Maybe you can have the things shipped to your office. But installing delivery boxes is a good idea. My USPS delivers like that to our mailboxes.

Just want to throw it out there that a lot of employers don't allow personal packages to be sent to work. It's a good solution if your office does, but I recall clearly that at the bigger companies I worked for immediately after 9/11, they put the kibosh on having things sent to work, because all package were scanned by security, and that was enough of a pain in the ass without everyone's Zappos orders to also deal with.

God forbid we have a functioning USPS!

On a more pleasant note, when I moved into my building 15 years ago, people routinely stole packages. Now I have a lot of millennial transplants as neighbors, and lawd knows I've bitched a lot about their Santacons and their inability to throw trash away properly, but I have to say they're at least good kids in that they don't steal packages. And people now actually do that neighborly thing where if you see a package is for someone on your floor, you bring it up there and leave it for the person.

Maybe someone could booby trap a package---so it gets some kind of ink on his hands like banks use that dye? It would stay on for days and he would be more likely be apprehended?

As someone that lives on the first floor of a building, I can not STAND anything bike chained in the stairwell. Inevitably, it's in the way and hey - what do you care, right - you go upstairs with your brood and leave me to trip my way to my door.

I live on the sixth floor of a walkup, and several years ago my neighbor across the hall used to lock his bike to the first-floor bannister, facing down, so he could make a quick getaway.

At the time, I used to carry my Swiss Army knife with me everywhere, so when he locked his bike like this, I would stab one of the tires and let the air out. He did this enough times—and I retaliated enough times—that he got the message.

The landlord/building management at the time could seriously not give a shit about anyone locking their bike in a public area—even when there was a bike area provided in the courtyard of the building—but our current micromanagement sends out memos every couple of weeks at least, so you know they'd threaten to fine or evict any tenant doing that now.

I miss the Lower East Side.

Did anyone interact with this guy and notice anything else? We had a guy that looked like this--tho maybe a little older, and with a hand truck--get buzzed into building today. He pretended he was lost. He def just was NOT supposed to be here. I'm in Brooklyn btw but just two stops from EV and right near subway.

Re: stuff chained at first floor, blocking access: Notify FDNY and they will make sure a violation is issued. This is absolutely a safety issue, in terms of egress in an emergency (not to mention inconveniencing people living on the first floor).

Check out Doorman.co, theyll deliver your packages at night when youre home. I've been using it for a month and its great!

10:17, thanks for the suggestion, I was wondering if Doorman.co was good! I was using Parcel for the same thing and really liked them a lot but they just changed their business and aren't doing the same services anymore. When they made the announcement a few weeks ago I was extremely sad. Anyway, thanks, I'll give them a try!

As long as most of us can agree that this man isn't the real culprit and the victims had it coming (but only to the extent they meet certain demographics).

Use eNeighbr. Send your packages to people who are always home to sign for them. It's a good service and you'll get your package!

How have they not gotten him yet?