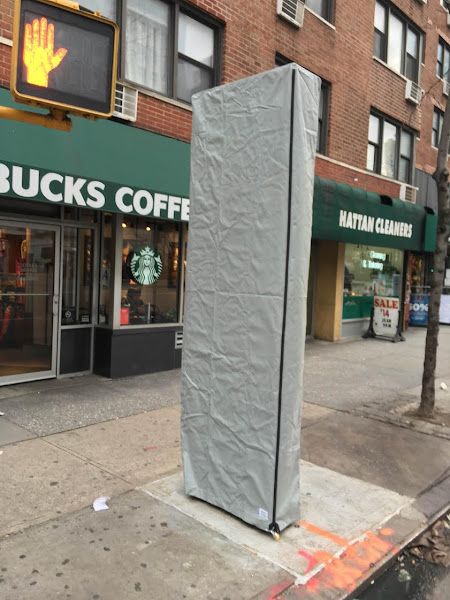 Sure, it may not look like much now, but soon this shrouded installation, which arrived this morning, will be a gigabit Wi-Fi access point/hub/thing outside the Starbucks on Third Avenue and East 15th Street.

We'll cut-n-paste some from The Verge for the background:

First announced in November 2014, the hubs are designed as an update to the standard phone booth, using upgraded infrastructure to provide gigabit Wi-Fi access points.

The full network will install more than 7,500 public hubs throughout the city, each replacing a pre-existing phone booth. Once completed, the hubs will also include USB device charging ports, touchscreen web browsing, and two 55-inch advertising displays. The city estimates that ads served by the new hubs will generate more than $500 million in revenue over the next 12 years.

And this LinkNYC kiosk is the first one that workers have installed. As Gothamist notes, "the city has pledged to build 7,500 of the hubs in place of old pay phone booths over the next 8 years, with 3,500 of them coming in the next four years, and 499 more of them over the next 6 months." 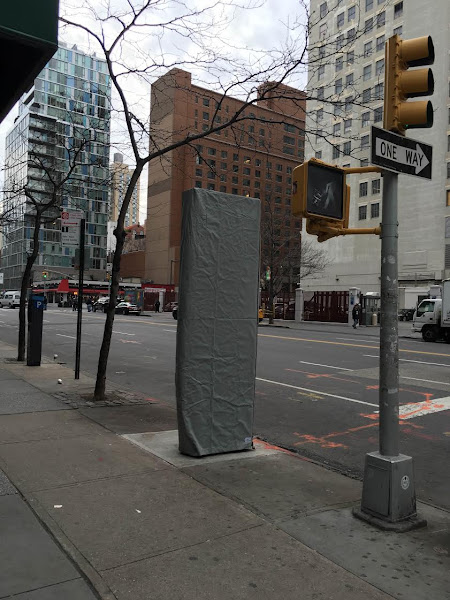 LinkNYC will be testing this one for the next few weeks before you will be able to use the free Wi-Fi, charge your smartphone or have the government track your every move even easier.

"The city estimates that ads served by the new hubs will generate more than $500 million in revenue over the next 12 years." And this doesn't even include all the revenue that will flow to the medical-industrial markets from all the CANCER from this unrestrained broadcasting of microwaves into the environment. Even though there has been no study of this over any time - there is no proof it is safe - just like with flouride being pumped into our drinking water, nothing will stop the State from poisoning us.

This is crazy, Grump is right (but maybe not about the flouride, lol)...

Check the Canadian government's guidelines for safe Wi-Fi usage and realize what it means for a country to actually give a damn about the health of its people.

Basically, as the Canadian gov's study says, with the technology still being fairly new, there's not enough data to say which diseases Wi-Fi radiation actually causes; but it's been conclusively determined that it causes cell damage, so it's only a matter of time before we'll know.

Grump, There is a microwave beamer 1000 xs stronger than this thing, firing right at your apartment window right now.
You're worried about poison?? You're in the wrong town.

Here's a picture of what it looks like under the covering

Zoltar
"Fairly new"? If you consider half a century new, I guess.
Color TV was a 1000 times worse.
Standing in a crowd where 6 of the 8 people right near you have turned-on cell phones in their pockets are a lot worse for you.
Deal with it.

I wonder if you stick your tongue on the obelisk when it's freezing outside will you will become a human wi-fi antenna?

During Sandy on B, my only access to loved ones was the pay phone on 5th. Cell towers were donzo. Why not keep pay phones?

Fluoride is rat poison; don't let anyone tell you different.

nygrump said: And this doesn't even include all the revenue that will flow to the medical-industrial markets from all the CANCER from this unrestrained broadcasting of microwaves into the environment.

Why do you think they suppress information about animal protein being carcinogenic? Doctors depend on the sales of dairy products to fund their golf vacations, and no: I'm not kidding here. Lowfat milk is also carcinogenic.

As they say: "Just because you're paranoid, it doesn't mean they're not out to get you."

Why is it wearing a condom?

It will be interesting to see where these will be placed in the outer boroughs, places where connectivity is needed even more.

Just down the block is 133 3rd Avenue, a zombie construction site mired in accidents, city-ordered work stoppages, and unsightliness. Its ongoing decay presents the perfect foil for the new wi-fi kiosk; no obvious work appears to go on, but 133 lately has been unlocked and last I looked, the city had taped another notice of some sort to the front. Time for an evgrieve update, no?

I will also chime in on 133 Third Avenue. There has been an ongoing lawsuit since 2012 between the developer and the adjacent building. I've been tracking the case through the New York State online court records, and as the case drags in with countersuits abd delays in depositions, a resolution is not in sight. Meanwhile, the broken sidewalk in front of 133 Third Avenueis hazardous to pedestrians. I've emailed local politicians, violations have been issued, but no repairs have been made. EVGrieve will hopefully revisit this fiasco.

...and it looks like the monolith in 2001: A Space Odyseey. Next a hipster will ascend from the corner L train stop, touch it, and throw an artisanal smoked turkey drumstick in the air.

why do we need this ?