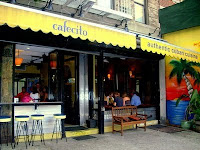 After 14 years in business at 185 Avenue C between East 11th Street and East 12th Street, Cafecito will be closing its doors for good after service on Sunday.

Several regulars shared news of the Cuban restaurant's closure, and a staffer confirmed the news. There will be a closing celebration Sunday night at 9. All Cafecito friends and fans are invited.

As we understand it, business had been tapering off ... and the Cafecito team didn't want to see it go out of business slowly and sadly — "dwindling into another solemn East Village story," as one source put it. In any event, the owners aren't leaving the neighborhood — they also run Royale at 157 Avenue C between East Ninth Street and East 10th Street.

Like other businesses in the area, Cafecito was hit hard during Sandy in October 2012. Longtime manager Manny Garcia was featured in an Out and About in the East Village here in March 2013: "There was four feet of water in the building and we were closed almost a month. We’re still trying to recover financially. We had to replace everything. We didn’t have power for 3 weeks and to this day we still don’t have Verizon."

One nearby resident praised Cafecito's management for all their help through the years. "They could not have been any more supportive of local causes."

There is already a suitor lined up for the space. An applicant will appear before CB3's SLA committee next month. At this point, the applicant's identity hasn't been revealed.

Email ThisBlogThis!Share to TwitterShare to FacebookShare to Pinterest
Labels: Cafecito

That's a real shame. It has been my family's favorite local restaurant since we moved to the neighborhood 3 years ago. The pork shank 'special' (which was available every one of the dozen times I've eaten there) is easily the best dish I've had, but we've never had a bad meal.
-Sal C

Damn. They were a bit pricey but it was a good neighborhood spot with nice and competent staff.
They turned me off by getting their name on Santacon, I thought that was strange, but I'll miss Cafecito.

Dining-in at this place was generally very good, but the delivery was a whole other story. Same thing with Royale.

One of my goto spots. This sucks. Will definitely try to go this weekend.

Gonna fast throughout the day so I can eat the pork shank special that Sal also mentioned.

It's probably the owner of the Wayland, right? He said he was taking over the Royale space, so it seems likely he Is talking to the Cafecito people.

The Wayland fits perfectly in with all of the new developments going up. The neighborhood is ripe for carpetbaggers.

Went there last night and there was no pork special :(

I didnt eat much all day in anticipation too. Oh well. Will probably go back for brunch today. RIP Cafecito

Well, it's looks like you're gonna have to go to another go to, my friend. There ain't many go tos left around here . . so I'd go to, maybe, Williamsburg, if it hasn't already been gotten to.

I had some really good french toast. I saw that the guy at the next table was eating the pork shank so I guess I went for dinner on the wrong night.

1:14: If the L train goes I'd reconsider going to Williamsburg...