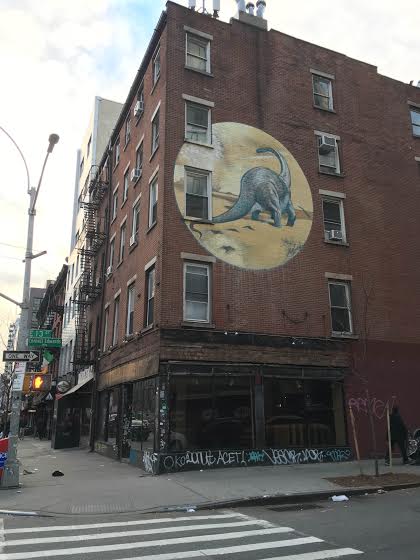 The family-owned custom wood furniture shop has some 30 outlets in the NYC metropolitan area, with its manufacturing plant in Maspeth. The East Village location was its first though, when Theodore Zaharopoulos set up shop on the corner in 1969. (In 2014, the company rebranded as Gothic Furniture, which implies something else. But!)

Anyway, as Alex noted, the storefront can be seen multiple times during "Taxi Driver" from 1976 ... (some trivia that Gothic has also noted in its news releases) ... the sign is just to the left of Iris' hat... 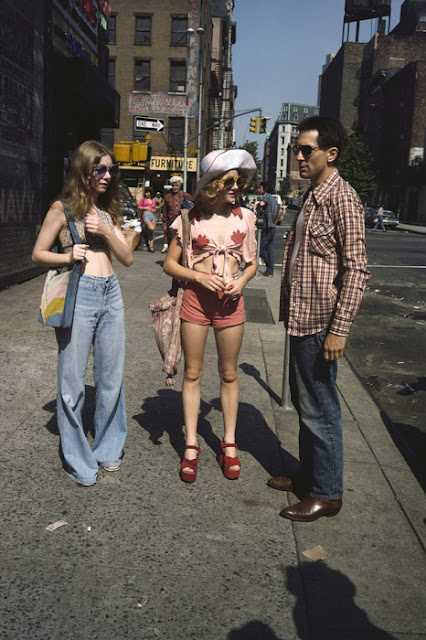 It was one of the few NYC storefronts that still existed from the film. (See Scouting NY for a "Taxi Driver" then-and-now feature.) 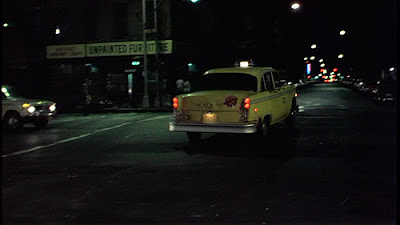 [Imagine via Scouting NY]
Posted by Grieve at 4:16 AM

Oh no! I have a dresser and a table from them...unfortunately I maxed out on what furniture will fit into my small apartment a long time ago, so haven't bought anything recently. Love the Taxi Driver images.

Just read Alex's post and same with me, Gothic Cabinet Craft and Surprise Surprise between them outfitted my apartment. I can still look around and point out many items that have stood me well from both those places. REALLY sad. (And I am not over Surprise Surprise's leaving!)

Even before gentrification hit big I thought how long can they sell unfurnished furniture (it all seems so 70's to me). The past decade I always got a cozy nostalgic feeling whenever I walked by seeing that store.

I KNEW I should have bought more bookcases...

Just got something from them this weekend. They had no idea what was coming. So sad to lose a great neighborhood resource like this.

Damn! Bookcases, dressers, tables...my apt is like their showroom. Well made stuff that lasts and was not too pricey.

I bought furniture at their store on 6th Avenue over the years and always had a great experience. The one time I tried to buy something at the 3rd Avenue location two years ago, it was a nightmare. I went in and ordered a dresser in person, and I asked if I could get it within a few weeks because I had a new roommate moving in. The guy assured me it would be ready and delivered on time. I didn't anticipate a problem because I always had such a great experience with the 6th Avenue store, and they had three weeks to get me this dresser. Cut to: I never got it. I contacted the guy who I ordered it from and asked what happened, and apparently the order was never submitted. No apology, no offer to try to fix the situation in any way. He was actually nasty to me. Being the wimp I am, I let it slide, which is my fault. If other customers had the same experience I had with this location, I can see why it shut down.

Nooooooooo! I loved seeing them there, a relic of the old EV!

I bought a CD case from them once. I'll miss them.

dang I always meant to get my foto taken outside in my best goth gear!:) sorry to see them go.

Taxi Driver trivia: the young woman to the left of Jodie Foster in the photo you posted was a real teen-aged prostitute upon whom Jodie's character Iris was based....

They made (and finished) our custom bookcases in the bedroom.

More maddening than saddening at this point. The city council could do something about this if its members weren't so busy taking campaign payoffs from the real estate industry.

Gothic Furniture still has several locations in the NYC area. In Manhattan there is a store on 85th and 2nd and also one on Broadway on the upper westside. There are also stores in Brooklyn, Queens, Bronx, Staten Island, and Long Island. You can still find all there products on their website www.gothiccabinetcraft.com . There factory is in Maspeth.