Guayoyo has been closed now for 1 year 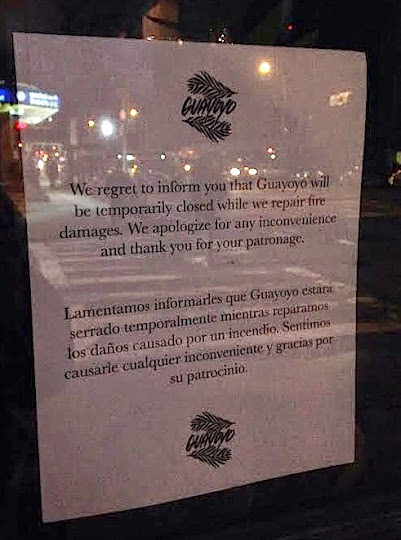 On the morning of Jan. 13, 2015, a fire broke out in the basement of Guayoyo, the Venezuelan restaurant at 133 E. Fourth St. and First Avenue.

Residents in the building were briefly evacuated, but the FDNY allowed them to return a short time later.

In the months that followed, we saw a few workers inside cleaning up the restaurant space. One employee on the scene last April told us that he hoped that Guayoyo would be back open "soon."

The space has sat empty now for months. 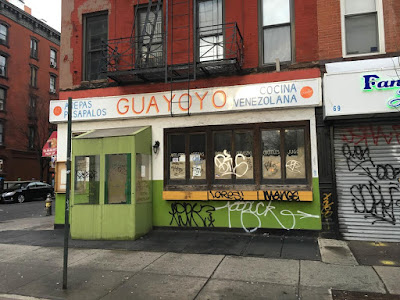 We haven't seen any signs of life. The restaurant's phone is no longer in service ... and no one responded to a message we sent to Guayoyo's public email account.

During a follow-up inspection after the fire, Con Ed discovered a gas leak in the building, according to a spokesperson for landlord Icon Realty. Con Ed then shut off gas service to the building. For the past year, a temporary boiler has sat outside the residential entrance on East Fourth Street.

According to Chris Coffey, the Icon representative, a majority of tenants have now had their gas service restored.

"We're continuing to work with the restaurant to get them up and running as soon as possible," Coffey, managing director with Tusk Strategies, told us yesterday. However, he said that there wasn't any timeframe for their return, citing the ongoing involvement with DOB and Con Ed representatives.

He said getting the gas service restored — for both the tenants and the restaurant — was a "daily activity" for the landlord. According to permits on file at the DOB website, the city has yet to approve a new fire suppression system for the restaurant. (The permit was filed on Oct. 1. The city disapproved of the plan on Dec. 1.)

As seen with B&H's labyrinth of red tape earlier last summer ... after the city OKs the permit ... and a FDNY-approved contractor does the necessary kitchen work, the FDNY must sign off on the new system. Then Con Ed steps in to test the gas lines. Once the restaurant receives final approval by all involved parties, the Department of Health arrives for an inspection before any food can be served.

So how can Guayoyo survive a year — and longer — without income but with mounting expenses?

According to Coffey, the restaurant does not currently have to pay rent ... and he says that Icon has waved over $80,000 in back rent.

The husband-wife team who own Guayoyo previously ran Kura Sushi at the address, which dates to 1988. After a lawsuit prompted by a similarly name restaurant in California, Kura later became Ishikura before closing in 2009.

There are residents who feel as if Icon has been deliberately dragging along the process so Guayoyo will eventually vacate their lease. Arthur Nersesian, a local writer, neighbor and frequent Guayoyo patron, figures the delay will allow Icon "to turn the corner into another overpriced shithole that will attract the worst and destroy what to me is still an East Village relic."
Posted by Grieve at 4:20 AM

Email ThisBlogThis!Share to TwitterShare to FacebookShare to Pinterest
Labels: Guayoyo

Of course, Icon will evacuate Guayoyo's lease. Icon did the same thing to Stage Restaurant!

Can't wait for the return of the best arepas in the EV! A friend of mine talked to someone in the space in like October and they said they were planning to be back soon but your mention of the Dec. 1 permit denial explains why that didn't happen. They do still occasionally respond on their Facebook page, I think the last time was November.

That last paragraph makes a lot of sense. $80K of rent for 1 year is only about $7K/month, which is well below what that space would go for on the market today.

I wonder if the same thing is happening over at Mono+Mono?

Icon's spokesperson is an extremely highly paid public relations consultant who used to work for Bloomberg. I-con must be paying a huge monthly retainer to his company, Tusk Strategies. Trying to clean up I-con's capitalism on steroids image after being named one of the ten worst landlords and all the other negative publicity.

On a similar note. Anyone (EV?) know what is going on with 116 East 4th formerly Mono + Mono? They had a fire 4/21/2013 and to this day the sign regarding the fire remains up with zero evidence of any construction etc. Anyone?

Maybe they could put a coat of paint on that nasty graffiti and clean the windows. NYC looks like a real shithole lately. Dirty streets and dirty buildings and dirty people.

Daniel Wexler - I walk past often and have seen them doing "something" there every once and awhile over the last couple years. Not clear what they are doing. I see them with ladders doing something on or near the roof.

@Lauren Thanks. It's a pretty cool looking space which is why I was interested

Chris Coffey of Icon will have the restaurant "up and running" out the door with an eviction. Does the DOB keep track of all the Icon building that have their gas shut off? They seem to be using the same tactics on everything they buy.