More about the Mamoun's Falafel move on St. Mark's Place 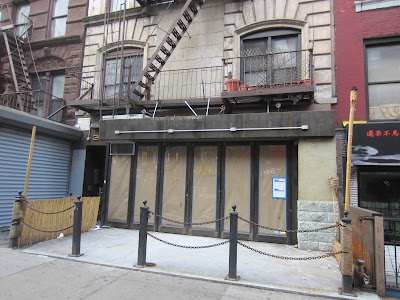 In case you missed our post on this during the holiday break... in the weeks ahead, Mamoun's Falafel will be relocating a few storefronts away from their longtime home at 22 St. Mark's Place to 30 St. Mark's Place here between Second Avenue and Third Avenue.

The Commercial Observer has a few more details on the relocation.

The 45-year-old falafel joint ... will double its size to 1,400 square feet ... Mamoun’s is taking the space for 10 years ... Asking rent in the deal was $250 per square foot. Mamoun’s is expected to open within the next three months, according to James Famularo of Eastern Consolidated.

The previous tenant at No. 30, Red & Gold Boil, closed after 13 months in business in early October.

Previously on EV Grieve:
Mamoun's Falafel is moving on St. Mark's Place
Posted by Grieve at 4:15 AM

Email ThisBlogThis!Share to TwitterShare to FacebookShare to Pinterest
Labels: Mamoun's

mamouns's beloved it may be won't have an easy go of it paying $30k a month in rent.
i shall do my best to support them

Hope this is a smart move for them!
They know their numbers better than we do.
Will be nice to have seats, etc. but will miss the hole in the wall.
Sock man should take the space!