As you may have heard late last night, David Bowie has died. He was 69.

Here's one local connection. "Lazarus," which has been playing at the New York Theatre Workshop on East Fourth Street since Nov. 18, features songs that Bowie specially composed for the production as well as new arrangements of previously recorded songs.

"Lazarus," inspired by the 1963 novel "The Man Who Fell to Earth" by Walter Tevis, centers on the character of Thomas Newton (Michael C. Hall), which Bowie played in the 1976 film version. Bowie also co-wrote the adaptation with Enda Walsh.

The production is sold out through Jan. 19. There are tickets available for the previously announced final performance on Jan. 20, which is also a benefit for the theater. Tickets are $2,500 and $1,000. Details here. 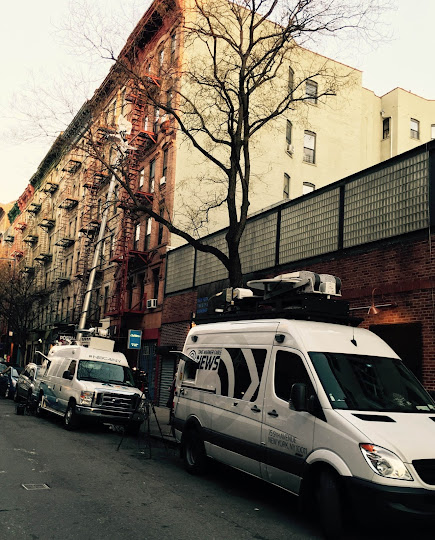 NBC 4 and NY1 were doing live remotes this morning from the New York Theatre Workshop, where there was one bundle of flowers left outside the front doors. (There was also an empty champagne bottle...) 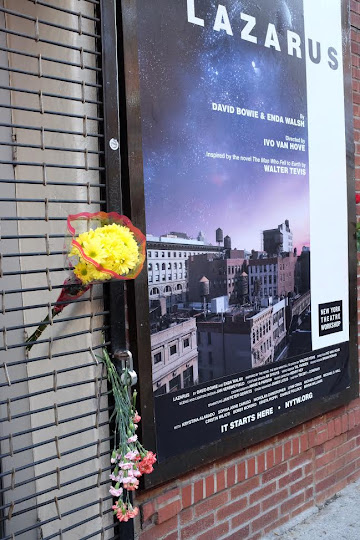 An EVG reader said that these arrived overnight on East 12th Street at Second Avenue... 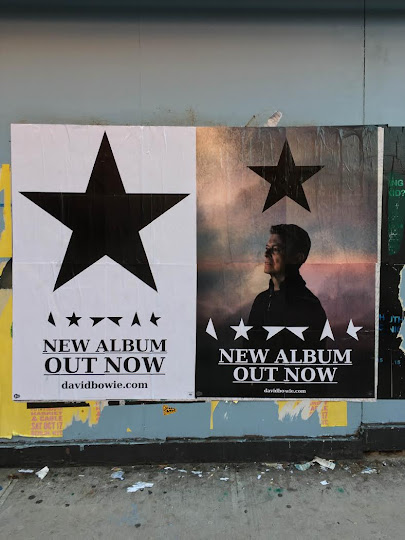 The scene outside David Bowie's residence on Lafayette... photos via Steven... 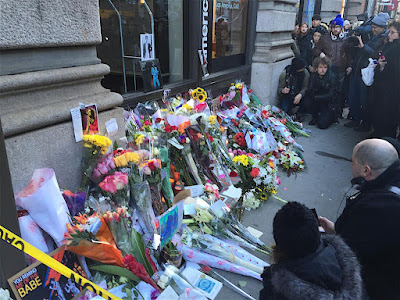 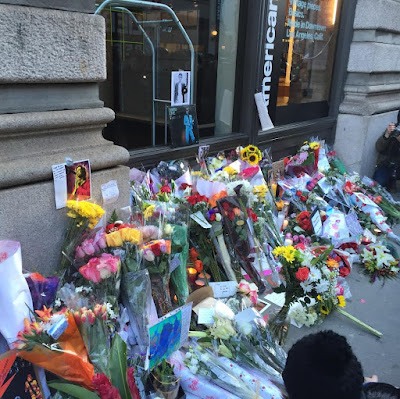 The scene at 2 a.m. on Lafayette Street via EVG regular Peter Brownscombe... 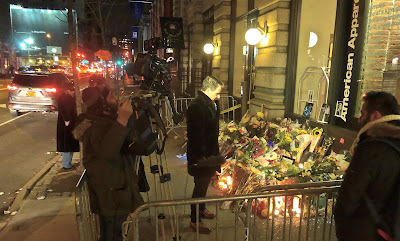 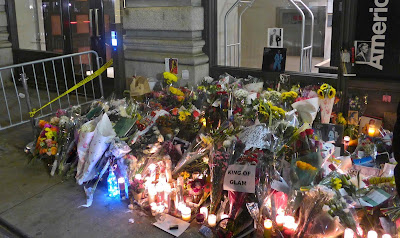 On the gate at The Immigrant on East Ninth Street between First Avenue and Second Avenue... 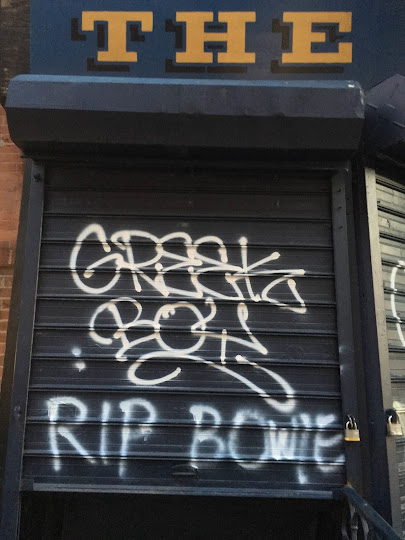 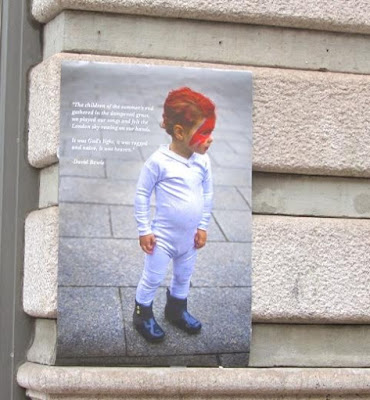 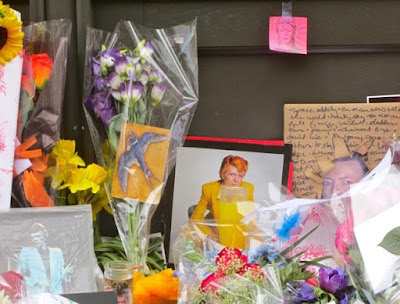 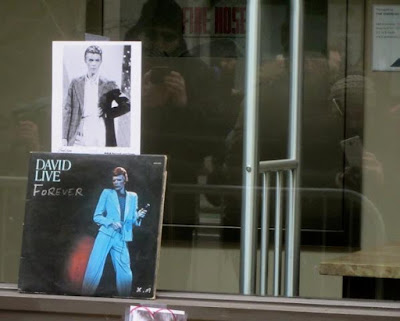 His other "local" connection; while not quite E.V., he lived (at least in the 90s) on Lafayette just below Houston. Close enough.

It's 1972, and Bowie is coming to Cleveland for his 1st show in North America. For about a month before, the overnight WMMS dj is looping the end of Suffragette City to the beginning of the song, creating an unending 40-minute version of the tune. Some of us were literally dancin' in the streets around 2am every morning.....and I mean frenzied, shake'yerbooty, heads down, no nonsense DANCIN'!!!
However, the posters that we are putting up for the concert show David on his knees giving Mick Ronson (ld gut) a pseudo-blow job....and we're all wondering what's the deal with THIS guy. And THOSE CLOTHES! Not really sure of his "rock and roll cred", but we'll take a chance.
As you will hear from the following embedded audio of that show, we didn't have ANYthing to worry about :

Rest In Rhythm David.....thank-you so very much.

Can hardly believe it. I met Bowie in 1972 - spellbound ever since.

Yes 285 Lafayette there are flowers.

I bought his new album this past Saturday, and was thinking how fantastic it was he was still writing new songs. There were rumors regarding his health a while back which sadly now appear to have been true. His music and artistic ventures have entertained and inspired a generation. Thank you David for making our lives richer.

The Ziggy Stardust tour rolled into Phoenix (where my parents had inexplicably dragged me for a few years) in November 1972; the ticket cost $4. My friends and I, early adherents of glitter rock, had front row seats in the tiny Celebrity Theater, with a revolving circular stage, no less, and even tho we already all had the Ziggy Stardust LP, nothing could have prepared us for the glories of the live show, costumes, shaved eyebrows, face paint and fake blowjob included. Saw him again in '78 in his Thin White Duke persona, but that 1972 show (as well as a 1973 Iggy and the Stooges gig in the same theater) is still one of the highlights of my concert-going career. Now if only I had seen the New York Dolls, my teen glam years would have been complete.

Rest in peace, Mr. Bowie, and thank you for everything. And many thanks also to DrBOP for sharing that link, I'm listening to it as I type this, still in shock.

I will miss you Ziggy Stardust. Thanks for all the great music. It will outlive us all.

I ALSO WAS IN CLEVELAND THEN WHERE BOWIE WAS A SENSATIONAL PHENOMENA
THE FM RADIO STATIONS COULD NOT PLAY HIM ENOUGH.SAW HIM AT THE PUBLIC
AUDITORIUM THIRD ROW CENTER FOR MY FIRST CONCERT EXPERIENCE EVER AND NOTHING
EVER TOPPED IT .ALSO SAW DIAMOND DOGS TOUR ,YOUNG AMERICANS AND THIN WHITE DUKE
HE WAS AMAZING EVERY TIME HE WILL BE MISSED ,HIS LEGACY IS HUGE A GREAT LOSS ONELUV

MSG 2003...stuffy nosebleeds, so most peeps sat down....theres this old freak with a wild thinning mullet, scrappy denim vest covered in weird patches, jangly earrings...he's dancing like crazy the whole show impressing some girls up there, they're dancing with him.....you can tell "Ziggy Stardust" had changed his life 35 years before....he was a cool dude.....anyway that piano intro to "Life On Mars?" started, and me and him just whooped in joy, and I remember nodding to each other in acknowledgement of that moment......I think of that cat, and David almost daily.......
David was the guiding star....not from this planet......back to space.

Santa Monica Civic Auditorium Oct 20 1972 ($5.50)
Ziggy played guitar, and there wasn't a single person in the audience who's jaw wasn't on the floor.
(I also have the Pig "Trademark of Quality" orange vinyl bootleg of that concert)
Yep. changed me.

His legal name was David Jones, but he changed it to avoid confusion with Davie Jones of the Monkees.

I once saw him on a DVD of the Dick Cavett show from 1972 in which Cavett revealed that Bowie's real name was (I'm sure this is misspelled) "Maniscious Beetlegas". Bowie's nervous reaction seemed to confirm that this was true....

FAME, what you need you have to borrow…

I was a tween-age kid when I first heard this song, and it changed my life—although probably not as much as Frank Zappa would a few years later.

I saw Mr. Bowie live at Roseland in 1996. A brilliant artist and an amazing performer. Weird to think of the world without him.

David Bowie was involved in the community, as you can see with Lazarus at the New York Theatre Workshop, and was involved with Housing Works and would donate books at their bookstore on Crosby Street. We miss you. RIP.