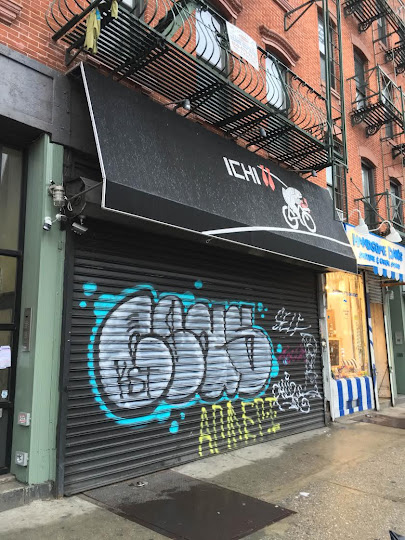 An EVG reader tells us that Ichi 88 on First Avenue between East 11th Street and East 12th Street has been closed since at least last Thursday.

There isn't any answer on the phone. To date, there isn't any mention of a closure on the Japanese restaurant's Facebook page... and no note on the gate that points to a temporary closure.

Per the EVG reader: "Too bad, as the food was exceptional, authentic according to a Japanese ex-patriot and reasonably priced by the standards of the East Village 2016."
Posted by Grieve at 4:13 AM

Email ThisBlogThis!Share to TwitterShare to FacebookShare to Pinterest
Labels: Ichi 88, restaurants that may possibly be closed now

Never seemed to have a lot of clientele. Neither did the sushi place that was in there before that. Might be experiencing an overkill of sushi places in the neighborhood.

Schoolmarm correction: expatriate. Not someone who used to be a patriot, but someone who resides outside his original country of citizenship. (Expatriates may be very patriotic. They just live somewhere else.)

It's a pet peeve.