If you are looking for Smoke & Beer on Avenue A, then this store is for you

Do you remember back in December, when we reported that the former nail salon on Avenue A between East 13th Street and East 14th Street was going to become a smoke shop? 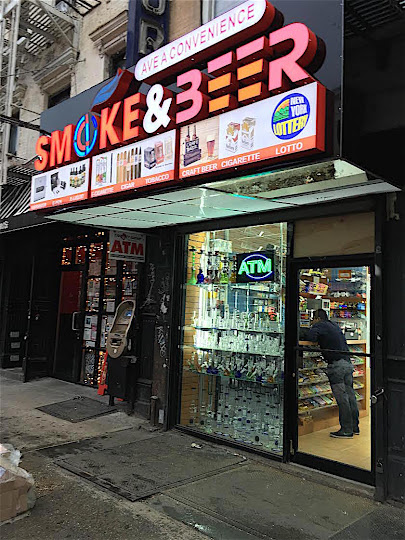 As you can see on the marquee, the shop sells E-cigarette, Cigar, Tobacco, Craft Beer, Cigarette and Lotto.

Previously on EV Grieve:
Smoke shop, the new nail salon, opening in former nail salon on Avenue A
Posted by Grieve at 4:09 AM

gimme some of whatever that signage designer was smoking!

I guess this sign will be "old school charm" in 40 years or so.

Now that is a 12 on the 1-10 Ugly scale. Could it be more of a pandering nightmare? Someplace else to boycott, but since I am obviously not their target audience, it really doesn't matter, I'm sure it will be a rousing success.

My prayers have been answered! Finally! A Beer Store!!!

Shoulda put a clock inside the "O".

@Makeout Perhaps with hands fixed at a certain time in the late afternoon?

How about smoke, beer, and medicinal marijuana?

Just passed on my way home and the actual sign is a lot less colorful than it appears in this photo, which is kind of disappointing. SMOKE and BEER are both solid red letters, not the groovy red with turquoise, orange, and pink accents seen in the photo here. Maybe it looks that way once you are already stoned?

Restaurants close or can't open because they can't get a liquor license. They're letting a bong store sell beer?