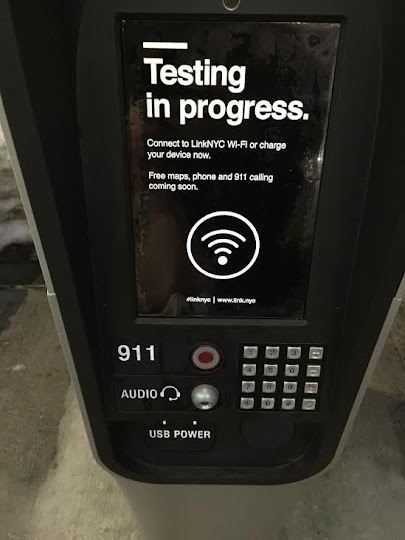 [Photo from January by Stephen Popkin]

After about six weeks of beta testing (starting with a handful of kiosks on Third Avenue) ... the city's free Wi-Fi hubs will be launched this afternoon by Mayor de Blasio

Let's go to Curbed for details:

When the four hubs went live last month they only had the free Wi-Fi capability. But with the public launch today, all the other functions of the kiosk will also go live.

Customers will be able to use a touchscreen, or a Link tablet as they are known, to make free phone calls to anywhere across the United States. They will also be able to look up directions, and find out about other city services. The kiosks also come with two free USB charging ports to charge devices.

The city is expected to have more than 500 kiosks up and running by July... with a goal of 7,500, each replacing a pre-existing phone booth, over the next eight years.

You can read more background about the LinkNYC project here.

Previously on EV Grieve:
Another Wi-Fi hub arrives on 3rd Avenue
Posted by Grieve at 12:36 PM

Will we be able to make a simple phone call for those of us without devices?

I've noticed that the ports and keypad are at perfect "urinal" height. Great design. These things will be destroyed by the crustys and bros within six months.

And anything you do on / with them will be used to deliver highly targeted ads. Nothing is free.

Add these to the citibike docking stages and gorgeous streetscapes around the city are blemished. Lame.

This is like the W—-—- Corporation in Franzen's The Corrections whereby said corporation reached an agreement to "empower" every classroom in the Philadelphia by providing computers (crash-prone or useless) for the city's classrooms, in exchange, W—-—- Corporation gets exclusive right to employ for promotional and advertising purposes all classroom activities within the school district of Philadelphia. Sounds eerily similar.

Nothing is free. If something is 'free,' you are the product.

Interesting read in Adweek. The only reason these exist is the money to be made from advertising. http://www.adweek.com/news/technology/what-it-means-consumers-and-brands-new-york-becoming-smart-city-169643

this is great news... for anyone on 3rd Avenue.

Wouldn't touch the keypad or the screen without about a gallon of Purell on it first! Esp. in the drunk-ghetto we live in!

Sorry but these things are ginormous, big tall and heavy, like the obelisk in 2001: A Space Odyssey. They feel like solid metal, and it's just a matter of time before a truck or car gets into an accident and topples one of them over, crushing all the pedestrians nearby. At least they will get a free ad sponsored phone call so that they can say goodbye to their loved ones.

Its like those fountains they put up in summer with wonderful NYC water but they don't bother to mention it is full of flouride.

So let's see. Under Bloomturd we had to lose all of our eccentric, individualistic newsstands that served so faithfully for years because they were considered "visual clutter" (meaning they offered no possibility for corporate advertising on their utilitarian little shells), and in their place our sidewalks and streets are taken over by soulless, sterile, uniform, bland, corporate excrescences supposedly designed for our "comfort", "enjoyment" and "life betterment". Anyone who believes one iota of that crap probably thinks the Honey Fitz would actually be an improvement over Nino's.

I wonder if these include cell site simulators (i.e., Stingray, etc.)?

@Giovanni: You are right!

Also: how much easier could they make it for someone to pick the pocket or bag of whoever's using this to make a call? The called is facing the kiosk, back turned to everyone on the street - great design. NOT.

The info security surrounding these things is a nightmare.

@Makeout. LOL. "Sorry, I can't talk to you right now because I'm under this kiosk dying. Can I call you back later?"

Every article about the LinkNYC towers makes it clear these are 100% about ads, and the information it can collect from people to yield - wait for it - more, targeted ads.

I'll jump for joy when the "free" WiFi comes to my area.