[Updated] These are likely the last days for St. Mark's Bookshop 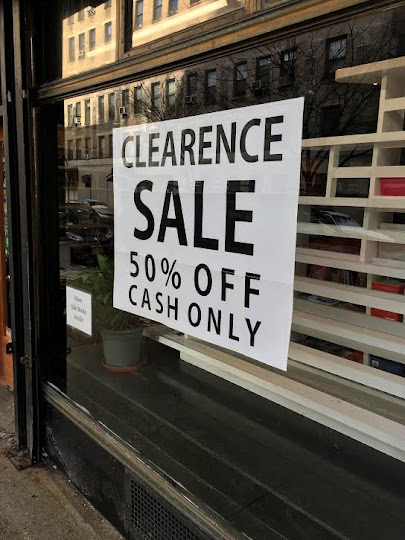 This past Thursday, St. Mark's Bookshop launched a cash-only, 50-percent-off-everything (except cards and consignment books) sale.

You're correct in thinking that's likely not a good sign for the rent-challenged store's future. For starters, the clerks have been telling customers that they'll only be around for "a few more days."

And Bedford + Bowery spoke with the shop's lawyer, James West, who said that the bookstore was served with a Marshal's Notice about a week ago. They reportedly owe $62,000 in back rent to the landlord, the New York City Housing Authority. And there's more.

“The people they owe money to are, among others, the State – there are some taxes due – but there are some other creditors, one of them was a book distributor. That was the pressure point.”

“The State doesn’t usually play games,” West added. “That was pretty much it.”

According to New York’s Department of State, a warrant was issued on January 21, 2016 for a $34,408.76 tax lien. The only way out of a tax warrant is to pay the bill in full or file for bankruptcy. Then, as Contant explained, as a result of losing a legal dispute with the book wholesaler Baker & Taylor (which boasts the title of “world’s largest distributor of books and entertainment”) a U.S. Marshal Auction has been scheduled for Wednesday, February 10.


Still, the shop, which has been in several locations since 1977, seems to find a way to hold on. Last Wednesday, The Awl had a post titled "The Mystery Money Keeping St. Mark's Bookshop Alive." There are apparently several investors, including longtime East Village resident (since 1959) and building owner Charles FitzGerald and a man named Rafay Khalid, "who covered the bookstore’s $22,000 down payment on its lease with NYCHA," per The Awl.

What Khalid and FitzGerald propose, and what they hope the city will agree to, is a new lease, with a new company — under a new name, Khalid said repeatedly — that will pay a higher rent than it is currently paying. In return, it will forgive the back rent. FitzGerald, any investors, and a management committee will direct how to allocate any funds raised, including whatever is left of the $200,000 Khalid said he’s already raised. “I think of this as a startup,” Khalid said. “St. Mark’s 2.0.”

Meanwhile, there's the 50-percent-off sale. The store is getting picked over, as you'd expect ... last night, I noticed one copy each of Richard Hell's "Massive Pissed Love," Romy Ashby's "Stink" and Kim Gordon's "Girl in a Band," to name a few titles that I have an interest in ... and there were several copies left of the latest Maximum Rocknroll and Mojo "Punk Anniversary Special" with a CD of "15 pre-punk nuggets" (Hawkwind!)... 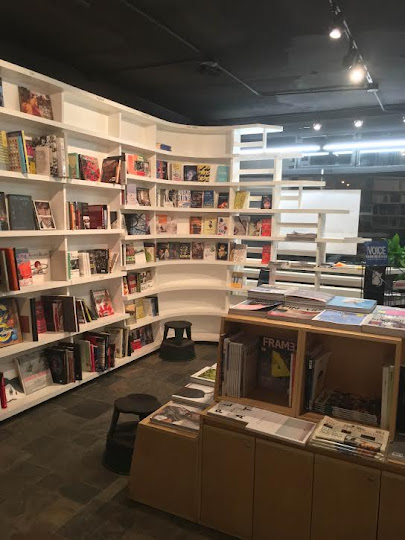 Jim West, a lawyer with his own firm who has been providing pro bono legal assistance to St. Mark's, explained that New York City would probably prefer not to see the execution sale happen. The reason, West explained, is because the cost of the auction would likely be higher than the money it will bring in.

If the execution sale does not happen, West said St. Mark's could stay open until March 9, which is the date of the next hearing about the back rent.

A bookstore that can't spell "clearance" on its closing sign? Really?

I wish they had stiffed Cooper instead of NYCHA.

No great surprise here. You can't mess with the tax man for very long and get away with it. New ownership with some capital to back up a smart merchandising plan has the possibility of success.

I wonder if the next tenant will also hire an architect to re-design the space?

Ingram is actually the biggest book distributor, so I'm guessing that they are on credit hold with them as well.

I've always been a fan and patron of St. Mark's join back to the days when the were actually on St Mark's. But, as someone who has been in the book business for 30 years, they have never been known as good business people. Even pre Barnes & Noble and Amazon, they were known for not paying bills on time. Some accounts refused to ship to them.

Independent bookstores have made a little bit of a comeback lately. McNally Jackson, Greenlight, Word, Astoria Bookshop. It's sad to see them go, but it looks like it was inevitable.

Are they closing to refinish the floors?

Was just noticing yesterday NE corner of Fourth Ave & 10th Street is still vacant nearly two years after Branch of Spice Restaurant vacated; space is slightly larger than the Third Ave SMB and location one avenue over an done block up would have been perfect in terms of keeping their old clientele. Anyone know what rent they are asking here? Space is next to Royal Dry Cleaner in a somewhat grubby apartment building, rental I'm assuming tho not sure.

Was a certain lady "journo" wrote that piece in promise of not disclosing certian info but revealed it anyway?

I don't know, but did they get any advise before moving there? It seems they never had the cash to support the move in the first place, and just were winging it...

Acai Lounge! Beer Store! Crack Pipe Store! Any of these would be better than that elitist, mismanaged book store.

I'm wondering the same thing; I was in the store today, and Bob said the GoFundMe was abandoned; unfortunately, if they told us they'd already spent the money and couldn't refund us, I wouldn't be surprised.

I've only been to their current location three times. Their store by 3rd Avenue was much more convenient. I liked their original store right on St Mark's best. It's still sad to see them go.

The first thing anyone should do is replace the 'owners' with someone or some people who know how to run a business. These guys are terrible, and are so stuck in the 80s (maybe 70s)...how a business that constantly keeps failing continues to get support from any kind of white knight must be a testament to the personalities of the guys and the nostalgia of the knights.

Yes, sure, let's have independent booksellers, let's support them. But let's support the ones who clearly have shown some kind of ability to survive in the Kindle age. This situation is, sadly, in Terri Schiavo territory now. Take these nice folks off life support and let someone else take over the business who might have a reasonable chance of keeping it alive and functional.

Don't let the nycha door hit you on the way out.

Is it too late for them to order that book on how to run a profitable small business?

If you read the Awl piece, they got:

$50,000 to restock the store when they moved to 3rd St, from their former landlord on St. Marks
$22,000 as a down payment to NYCHA
$200,000 in support (including the architecture)
Plus more from these high end investors.

And they STILL do this crowdfunding scheme..THREE times to get money from the rest of us instead of maybe getting finds from selling books to us.

I'm sorry, I was cranky with them before but now I've lost any sympathy. This is no better than grifting.

I was in there today and greeted by nobody. But what do you expect? No wonder they are closing. If you own a shop you want to make people feel welcome. They didn't even do that. Th e bare minimum.

They ran aground on 3rd Street, and now they have to abandon ship.

Sad.
If they were struggling on 3rd Ave they were going to continue to struggle on 3rd St -
which is not a high traffic street.
The expense and set up of moving, there was little chance to revitalize.

Very nice article... we will see what happens tomorrow, I have my doubts about an auction sale, and have gotten some not so subtle hints from the City Marshal that they are not eager to carry it our (advertising costs, carting, storage, poundage, auctioneer, all are up front costs that get added to the uncollectable judgment) Stay tuned...

Was there the other day and the person at the desk was friendly and helpful. I'm sorry to see them go.