Sidewalk bridge arrives ahead of demolition of 287 E. Houston St.; condos coming next 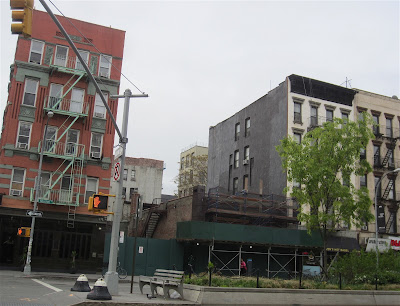 Getting to be time to demolish the two-level structure at 287 E. Houston St. near Clinton Street. The sidewalk bridge is now in place. (The demo permit was filed in March 2015.)

The plans, which still await city approval, call for an 11-story building with 28 residences.

Here's a recap from New York Yimby, who had the first look at the rendering earlier last month:

The boutique development will have two to four apartments on each story, including two duplexes on the first and second floors and a penthouse duplex on the top two floors. The plans indicate that the penthouse will have a private roof deck, and the rest of the residents will have access to a shared terrace. The apartments will range from one- to three-bedrooms, and asking prices will start at $1.1 million and go up to $5 million, according to PR reps for the development. 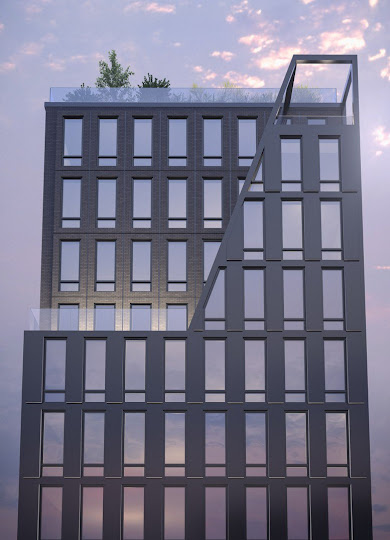 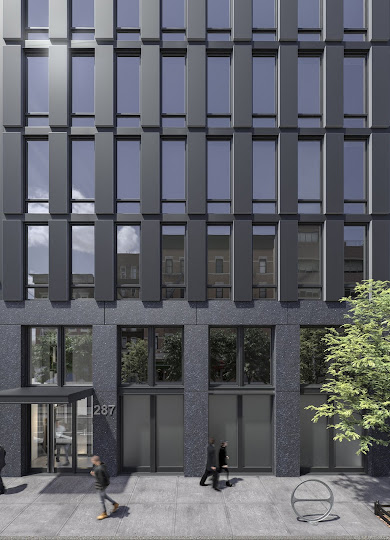 As we first noted on April 6, the new development already has a teaser site in case you'd like to get in on the action early.

The space previously housed a tax preparation service and a landscaping business.

Previously on EV Grieve:
11 stories of condos to join the growing East Houston residential corridor
Posted by Grieve at 4:10 AM

Please see my comment in the 438 East 14th Street post above - that offer holds for the LES as well.

Seriously, a drunken gibbon could do better than this.

Nothing will cheer me up in the late fall and winter like a city built exclusively of dark gray brick. These new "Dorian Gray" buildings our revealing our (lack of) soul.

All in all it's just a, 'nother brick in the Houston St. Horridor.

One bedrooms "starting at" $1.1M - so out of reach for 99% + of the people who live here. Yet another building for finance douchebros and overseas criminals to stash their ill-gotten gains.

I drove along Houston yesterday. What an embarrassing farce. Road conditions and construction projects worthy of the third world.

This "building" looks like a black cheese grater LOL.

Just when I think the renderings can't get any uglier, another one comes along to prove me wrong. This is utterly depressing.

Brutalistic and ugly as all hell.