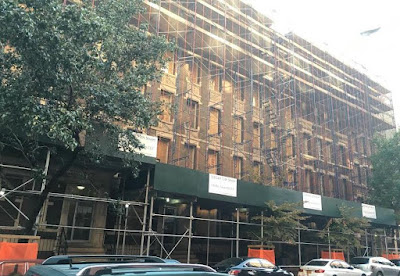 Sounds of demolition have been coming from inside 112-120 E. 11th St. between Third Avenue and Fourth Avenue... as you know, these five former residential buildings are coming down to make way for a 13-story hotel for Marriott’s Moxy brand.

From the street it's difficult to tell just what's going on inside here... But from above...an EVG tipster shared these photos ... 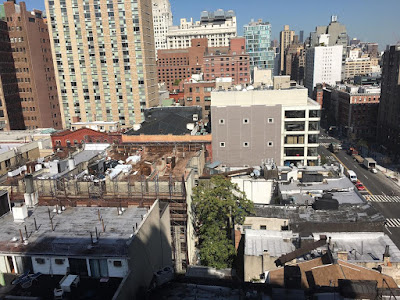 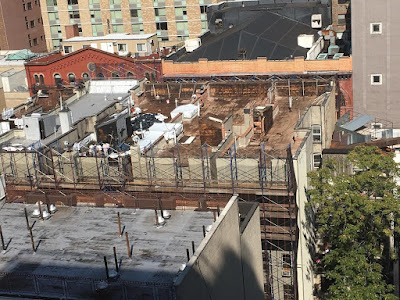 ...our tipster said that this "roof stripping" has been going on all week... 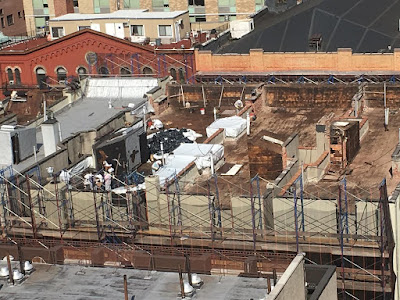 To date, we haven't seen any renderings for this 300-room hotel aimed toward the Millennial set. Stonehill & Taylor are the architects of record. They designed the one going up in Chelsea.

For some idea of what we might be in for here... check out the rendering for the West 28th Street location... 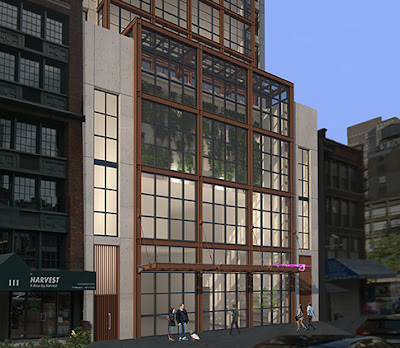 There will be several eating-drinking choices at the incoming Moxy hotel on 11th Street
Posted by Grieve at 4:30 AM

The "roof stripping" is the abatement of asbestos containing materials. Pre-70's roofing and adhesive typically contains a percentage of asbestos.

Please note the tyvek suites and respirators worn by the workers. The pile of sealed waste bags and sealed-off air shafts indicates an abatement project.

Sounds like a perfect location for 'Merica to open their 'restaurant'.

What a disaster. Such a blow to NYC housing.

Notice what they show on the extreme left side of the rendering - "Harvest" (restaurant?) which will be where Pourhouse now is. NY Central building will also be leveled to make part of this hotel.

The rendering in the post is for the Moxy on 28th Street, not 11th Street

I've noticed a lot - hell - most of the new residential buildings in the EV are nondescript and just fade into the bland architecture of the street. On one hand that's good. On the other hand it's cheap to be build and verrrry profitable.

Any type of architectural detail on the facade is considered a waste of money these days. Rarely do the architects have to look at these POS building themselves so they have zero investment in the neighborhoods they're shaping.

Still cannot believe this is happening. That block is already a mess. It will be even more "fun" now...

Late to the party: the tipster who submitted these photos must be my upstairs neighbor! haha. There are notices of Asbestos Abatement work going on at that site, hence the spacesuits. There is also an incessant, high-pitched screeching noise - sounds like an HVAC unit? - coming from... somewhere. My super said it's from that site. I filed a noise complaint with 311 a couple of days ago, but have yet to hear back. Apparently others in the area are complaining about it too. According to my super, if the City determines that the noise doesn't hit a certain decibel, they'll do nothing and tell us to keep our windows shut. FUN.