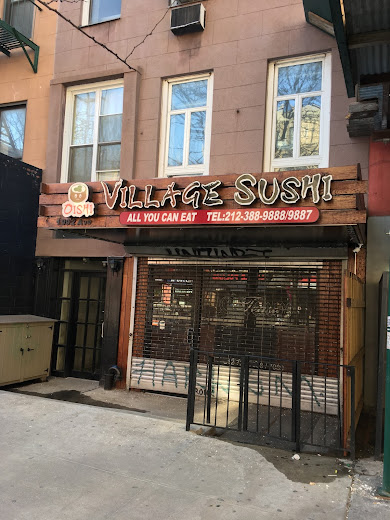 The signage is up for Oishi Village Sushi at 199 Second Ave. between 12th Street and 13th Street...

The owner of this all-you-can-eat sushi restaurant also operates Oishi Bay Sushi Restaurant on 29th Street at Second Avenue. (If anyone has eaten there, then feel free to chime in here in the comments about the food.)

The previous tenant here was Tease, the hair salon that moved around the corner to 13th Street between First Avenue and Second Avenue.
Posted by Grieve at 4:00 AM

I ate at Oishi Bay. People were nice, food was mediocre (salad did not look very fresh). I believe they also own Profit Chinese on 30th and 2nd.

I think they may be underestimating how much sushi a person is willing to eat.

All You Can Eat becomes a turn off for this casual sushi patron.