Citi Bike research: 'Bikes are being used for errands and commuting' 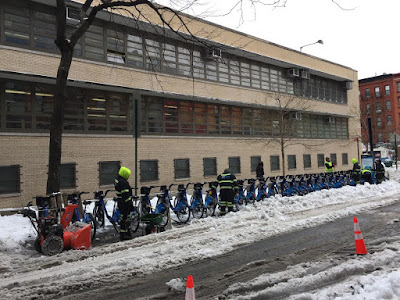 NYU’s Rudin Center for Transportation examined how people are using Citi Bikes. The Daily News got the first look at the research, which hasn't been publicly released just yet.

The vast majority of Citi Bike trips, 98 percent, are shorter than 45 minutes, and nearly half clock in at less than 10 minutes.

“People are using Citi Bike in short distances that are perhaps too short to jump on a subway, but may be too long to walk,” said Rudin Assistant Director Sarah Kaufman. “Citi Bike introduces a new option that ... really cuts down on travel times.”

The stats show the bikes are being used for errands and commuting, rather than leisurely cruising.

So they're being used as intended?

They take up valuable parking space, no one asked
the businesses or locals about this.
Just saying.

Wow, who could have imagined that? I mean, it's, like, crazy, right? Didn't everyone think that New Yorkers were taking those clunkers out for long, leisurely rides to admire the scenery, maybe a picnic here and there thrown in?

Next they'll discover that people who use canes and walkers do so because they need them for stability.

Agree that most Citibikers use for commuting/errands - but still, in Manhattan, there are many, many tourists using Citibike.

See this mostly in the Village, the Upper West Side and around Central Park/Columbus Circle.

Unbelievably, at around 5:30 pm (dusk) on a warm weekday a few weeks ago, saw a group of 6 tourists (seemingly Scandinavian)on Citibikes on 34th Street trying to make a right turn onto 7th Avenue.
They had no idea what they were doing or where they were going.
They blocked a bus going southbound - the bus, which was trying to pull into the bus stop, had to stop short.
Lots of traffic in that area.
Really dangerous for everyone

This is why the program is losing money. The day passes were where the profit was supposed to come from in the original business plan. Unless they significantly raise the price of the annual plan they can't survive without City funding.

@3:36 PM - "valuable parking space" that's a feature, not a bug. On this blog the "Citibikes are more dangerous than HITLER" comments are soon to come but I for one welcome our subsidizing bike friendly corporate overlords. Leave house -> ride to subway -> get off subway -> ride to house saves blocks and blocks from here in alphabet town. Do business in Tribeca and not have to worry about or babysit or return with my personal bike. Or take the bus which is slower than walking. The man-with-van guys have adapted, there's never going to be enough parking for car people who don't spend $500+ a month for a lot, I know lots of local businesses and haven't heard one complain, ever. YMMV but I miss em on days like today when the system is shut down for snow.

So visiting tourists can't go on short rides? What is that sentence about. Isn't the max ride only an hour and change? So how would you go for a leisurely ride and picnic? What about metrics on people docking just to take right back out again because of time restrictions? Pro citi bike spin BS. Majority of problem riders I see are citi bike, and im talking salmoning, sidewalk riding, cell phone holding, and clearly intoxicated night riding.

You might be on to something. If NYC created more parking spaces, it just might become a world class city.

Those Parking spaces are used to park Bikes instead of cars, using the space more efficiently

Addendum...And they are being used to run the lights, ride in the wrong direction and to terrorize pedestrians..

What a surprise. I thought the bikes were being used for trips to Mars and as flotation devices.

Using a Citibike is not exactly easy for a tourist.

I'm a "local" and I would much rather have a citibike station than an extra 2-3 parking spots in my neighborhood. I'm sure businesses wouldn't mind the extra nearby foot traffic either.

Bikes can easily lock up on sidewalk.. cars cant.

I saw a delivery guy using a Citibike -- now we have the worst -- or best -- of two worlds.

Citibike certainly isn't perfect, but people complaining about not having enough parking spaces in nyc need to GTFO. Ideally there should be almost no parking in the city. I'd much rather get rid of street parking and double the width of sidewalks. Pedestrian town. Love it or leave it.

I second 9:56PM. Ideally automobile traffic should be limited to emergency vehicles (police/ambulances/military) and commodities transport. We need, and the environment needs us to scale down our selfish habits drastically. No person should have the kind of mobility that a car provides, especially given the horrific environmental impact. The air quality will improve and people's general health will improve. It's a no brainer.

So much more efficient and so much more value in having the bikes take up a few parking spaces than cars. So many more people's needs are served.

Citibikes are great - is snow making everyone grumpy today?

the anti-car logic is hilarious. bunch of self important...

I can always count on a Citibike comment thread to entertain me for a few minutes.

The bikes are a novel idea mass transit and POV alone are not enough. The program is not that old and seems to be getting better with time. The comments about bike users well it's universal not just to Citibike users private biker owners commit the same violations...parking spaces well...find a garage you pay for privilege in a Urban area.

That Kool-Aid must be tastin' real good and refreshin'. Oh, yeaaaaahhhhh!