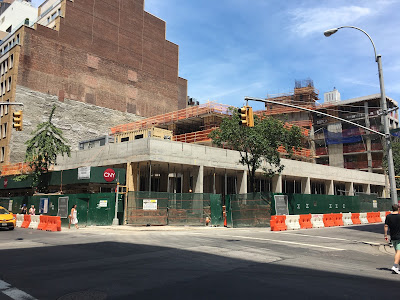 While walking on University Place the other day, we had time to take in the nearly block-long base and first three levels of developer Billy Macklowe's 22-floor retail-residential complex here between 12th Street and 13th Street. (This is the former Bowlmor Lanes parcel.)

In case you haven't seen what's on its way up... 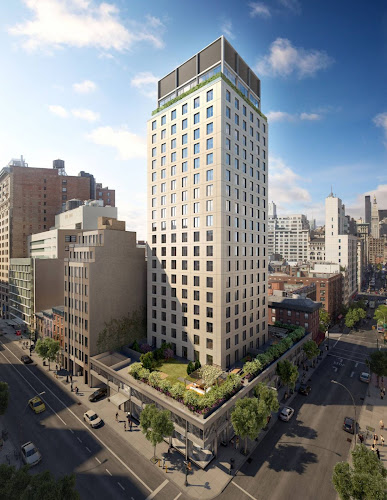 Bloomberg had an update yesterday (H/T to the EVG commenter for the link) on what Macklowe is calling 21E12. For starters, about 65 percent of the condoplex's 52 units reportedly have buyers, including the sale of two duplexes to a single buyer listed for a combined $23.5 million.

And apparently this won't be a place for the foreign super-rich to buy under the guise of shell companies with anonymous assets.

Macklowe told Bloomberg that most of the buyers to date are native New Yorkers.

"It is a New York building, for New Yorkers, and the people buying are going to live here.”

So far, the lowest-priced deal here was for $2.43 million. The building is expected to be ready for occupancy at the end of 2018.

In November 2015, local elected officials, preservation groups and even actor Ed Norton rallied to have this area rezoned to put height limits on new construction along this corridor. Mayor de Blasio wasn't apparently too interested in the proposal.

Bowlmor Lanes closed in July 2014 after 76 years in business.

Oh hi: The 22-floor Bowlmor Lanes-replacing luxury building
Posted by Grieve at 4:00 AM

This wasn't only Bowlmor lanes, it was also a disgusting huge parking garage which was noisy smelly air poluting very scary to cross on the side walk. Build houses for people instead of cars is a good thing

DeBlah isn't interested in anything that will benefit New Yorkers who aren't real estate developers contributing to his campaign coffers. They're the only ones who get whatever they want.

"It is a New York building, for New Yorkers, and the people buying are going to live here.”

Defensive much? There must be too many stories of these palatial condos being used for international money laundering and money hoarding.

That ipad rendering of the building looks like the one that got cremated in London last night.

Ed Norton should have summoned his Primal Fear character to city officials to kill the upzoning.

So I went to the 21east12 website, and it looks like the cheapest 1BR 1.5BA unit is about $2.5M. Expensive, but (sadly) not really out of line these days. But are the carrying costs really $3300 a month? $1300 for maintenance and $2k for taxes, every month? I'm in a 1BR/1BA coop a few blocks away, and my monthly mortgage + maintenance isn't a whole lot more than that.

"It is a [demographic cleansing] New York building, for [filthy rich] New Yorkers [who are the only kind that really matter!], and the people buying are going to live here [when they're not abroad or in the Hamptons].”

There, I fixed it so it says what's really meant.

Midtown South is really shaping up.

I think we should call this place what it is: the Penistrator Building.

Opinion: It is ugly from the outside, looks more like an office building or fortress than a home. Makes the village more like a Midtown. Feel ostracized knowing how many millions I don't have, no longer belong on these streets.