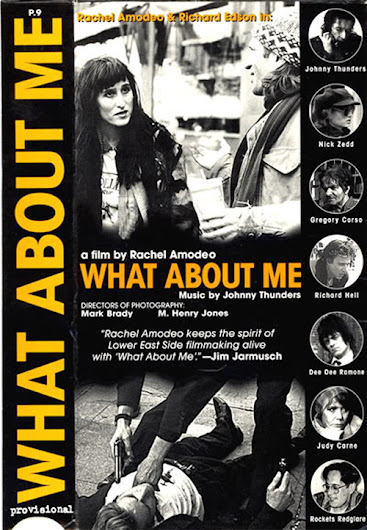 On Thursday night, Ciao For Now on 12th Street between Avenue A and Avenue B is hosting a screening of "What About Me," a film shot around the neighborhood in the early 1990s and released in 1993.

The film follows a young woman (played by Amodeo, herself) who wanders homeless in the East Village. “I took a walk around Tompkins Square Park to come up with an idea”, says Amodeo, “it was during the homeless encampment, where there were a lot of shanty houses at the time. I struck up a conversation with a few of the residents there and came to find out that a lot of people there had a series of breaks through uncontrollable circumstances. My idea was to make a story about a homeless couple who get swept up into the drama of living on the streets.”

The screening will be followed by a Q-&-A with Amodeo and her partner Henry Jones, an animator and artist who collaborated on it with her, and both of whom remain part of the nucleus of the old East Village art scene. The film stars Amodeo, Richard Edson, Nick Zedd, Rockets Redglare, Judy Carne, Richard Hell, Johnny Thunders, Dee Dee Ramone, and Gregory Corso; with cameo appearances by Jerry Nolan, Patti Palladin, Mariann Bracken, amongst others.

The cafe's doors open at 6:30 p.m. before the screening at 7:30 p.m. The cost is $5 per person, which includes complimentary popcorn and the Q-&-A after the film. Wine, beer, coffee and a light menu of items will be available for purchase throughout the night. Seating is limited so please call the cafe to make reservations in advance at 212-677-2616.

Email ThisBlogThis!Share to TwitterShare to FacebookShare to Pinterest
Labels: Ciao for Now, Rachel Amodeo, What About Me

I want to see this, love Caio for now.

Will a DVD be for sale? I want to purchase this film for my collection!

I am bummed I am leaving town Thursday morning. Rachel and Henry are true artists and ciao for now is a steadfast supporter of local artists. This post was the best thing I read all week! Maybe all month.

We missed it, but wonder WHY Ciao For Now was closed tonight (Friday)....