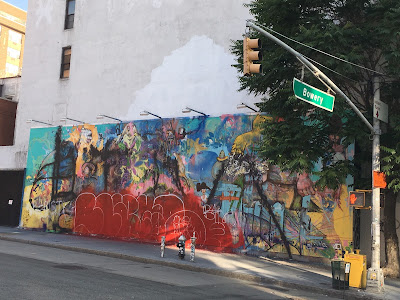 Updated 6/18: The mural has been painted over.

David Choe's mural on East Houston and the Bowery has been tagged multiple times in the past week, as Hyperallergic has been documenting.

There is mounting criticism over Choe's residency on the Bowery Mural Wall. As Caroline Caldwell detailed at Hyperallergic, Choe "has bragged about his predatory sexual behavior."

The Bowery Mural, currently home to a controversial work by street artist David Choe, will be the site of an anti-rape protest and performance art piece titled “NO MEANS NO” on June 18. The high-profile street art location has come under fire for offering a platform to Choe, after he bragged about a sexual encounter that sounded anything but consensual.

The protest is organized by curator Jasmine Wahi, co-owner and director of the Gateway Project Spaces, and founder and director of Project For Empty Space, both in Newark. "This piece is intended to examine examples of violent and predatory misogyny," reads the Facebook invite to the event. "Our aim is to provoke widespread rejection of the continued normalization of rape culture by bringing visibility to the topic."

The performance will take place simultaneously at Union Square South and in front of the Bowery mural on Houston Street, from 5 p.m. to 5:30 p.m.

In 2014, on an episode of his podcast "DVDASA," Choe admitted to co-host Asa Akira that he had engaged in what he called "rapey behavior" with a masseuse at her spa. He later claimed that his confession was simply "bad storytelling in the style of douche."

Buzzfeed and XOJane were among the media outlets that called him out on his actions. His alleged rape fixation is outlined here with multiple citations from his quotes.

Public art is supposed to be a benefit to the communities in which is it is shown. Supporting David Choe and normalizing his public boasts of sexual assault against women is irresponsible and harmful to our society as it perpetuates rape culture. Choe may get big art commissions, he may be rich, he may be a celebrity.

However, he is an inappropriate choice for public art in our community. The Bowery Mural Wall is a project of the corporate Goldman Properties. They have been irresponsible in presenting a public art project by Choe in our neighborhood. Choe's offensive actions and comments should not be supported or normalized but should be condemned. I'm not advocating censorship of his art, but in my opinion he is an inappropriate choice for a public art project in our community. Wouldn't we rather see projects by artists who have something constructive and positive to contribute?

Swoon, who had the Hurricane Sandy-themed work on the Bowery Mural Wall in 2013, spoke out against Choe on Instagram:

I just read the transcript of your rape story and I thought to myself wowwww, this guy honestly thinks he's being edgy while he celebrates within the safety of the same metaphorical locker room that has long protected Donald Trump, Bill Cosby, and countless entitled date raping predators of whom there are too many to name.

Why reinforce the most disgusting aspects of the already dominant mainstream culture while playing it off like it's some fun taboo or wild boundary crossing adventure? The day Trump got elected is the day you must have had to admit to yourself that there's nothing transgressive about your rape stories. Rape culture is all around us, and you choose to "entertain" by being just another drop in the bucket of violence.

Art gives us so many more ways to express sexuality and confusion than just normalizing rapist shop talk. To be honest I have a hard time believing there is not a major element of truth to the tale. As someone who comes from a family of survivors of sexual violence I can tell you first hand that the ripple effects of the actions and attitudes that you put forth as cool destroy more lives than you may even have the capacity to imagine. I hope you wake up soon.

Several people have spray painted rapist on the wall... this one remains... 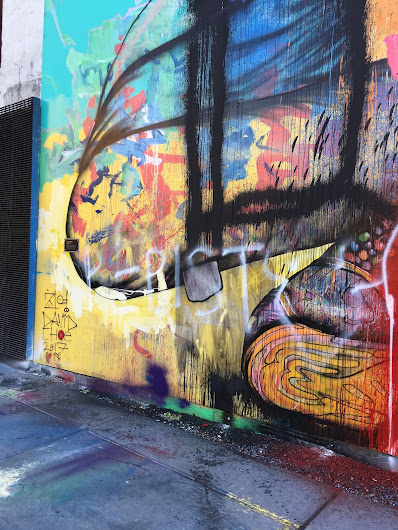 Goldman Global Arts, the wall's landlord, has yet to address the growing controversy. The mural was slated to remain up through October.

We can't stop thinking about how inspiring and exciting it was to have @davidchoe at the #BoweryWall! Here is a teaser of his process. Stay tuned for more!

Here's a clip from the Sunday evening protest/performance...

An incredibly powerful performance and protest entitled "No Means No" curated by Jasmine Wahi @browngirlcurator at the site of David Choe's Bowery Mural. Feeling honored to have witnessed these amazing artists fighting to dismantle rape culture, and fucking proud of the voices and fists raised today in the fierce NYC heat. #nomeansno #resist #nycart #artasresistance #dismantlerapeculture #jasminewahi #bowerywall

Here's video via The Dusty Rebel...

get off the curb ya stinking bum

Did this guy actually rape someone? If he did the victim must come forward with charges so someone else isn't raped by him.

In response to Anonymous, The majority of the protesters and commentators are not saying that Choe raped anyone. He is on record, in multiple instances, joking about rape, downplaying the seriousness of rape and he told a lengthly story of how he sexually assaulted a women for his own sexual gratification (and then joked about that). He is being called out for making wildly misogynistic statements in public forums (interviews, podcasts and posts). He unquestionably made the statements and did so repeatedly over time. They are documented online. The protests are against this kind of speech and this attitude that creates an environment that tolerates, normalizes and even celebrates rape. People are speaking out against it because, believe it or not, it is a big problem in our society.

@3:14 PM I see your point but remember a lot of women do not come forward after being raped, look how long it took victims of Bill Cosby to come forward. The person giving him a massage may not have been a citizen for example and did not want to jeopardize her living situation by coming forward.

One thing we do know is there is a recording of him boasting or "bro-asting" about forcing himself on that woman and telling the world how she put up resistance but that did not stop him. A lot of people, women and men think he's an asshole for making light of a sexual assault which he perpetrated.

The issue here is not about a conclusive rape by Choe, but instead one of his attitude and actual words concerning it, which are part and parcel of rape culture and should never be normalized into casual acceptance or met with convenient indifference.

From one of the links:

"Rape is never a joke. Rape is never funny. Rape jokes are not art. Rape confessions, whether true or false, are not edgy."

This is what it's about. Whenever this noise pops up, you dead it. Dead it on arrival and do not make excuses for it. Can't make the mural gig but they definitely have my support.

I can't believe Goldman commissioned this guy to do this piece. If they didn't do research and hear this interview, okay, but once they found out about this, why didn't they paint over the mural? Also, they have only featured three female artists and nearly two-dozen men? Come on! It's time to correct that. What's crazy is it is women who choose the artists!

6:55pm Protests to what end? He'll stop yapping his mouth about sexually assaulting women? I doubt it, and if he stops I doubt it's because of some protest. Where were the protests about the Trump tape? Before 11/8/16?

7:04pm I understand that but women have to report their attackers. To not do that is to allow the attacker to attack more people. Of course a woman who doesn't report an attack isn't an enabler like Camille Cosby but she is someone who is not helping get this monster off the streets. Cosby's accusers came forward decades too late. He's been in the press for too long about the accusations for a jury to ever be even 80% impartial. Hopefully there'll be a new trial and he'll be locked up once and for all, but if not the best we can do is boycott him.

7:26pm Dead what? How are you gonna "dead" what this guy says which he has every right to say? He has said what he has said, and the only way he stops saying it is if he decides to stop saying it, not what people like you do. The best/only thing to do with this prig is boycott his shit and ignore him. Ignore his trolling.

Here's the deal: He's an asshole no doubt, but it is clear to see he is obviously saying what he's saying to get attention and a rise out of people, get his name out there to his self-proclaimed "anti-PC" customers, who else? Protesting him is pointless as I doubt the mural will be taken down because of the protests and if it is you make him a martyr and big deal as it doesn't directly make him money. Again, the best/only thing to do is boycott this guy and ignore him, but I'll take it one step further: bombard his Facebook and Twitter with callouts, show businesses who carry his product what he has said, confront him face to face if you see him etc.

Attacking art is what the Nazis did. One of the things. It's not surprising to see this in the age of Trump.

Protesting is about saying "we as a society stand against this kind of language, this kind of behavior." Making a stand has value. The goal is to bring attention to the issue, address the problem and advocate for change. Suggesting that people who are upset about this not protest or that protests have no value only serves to further normalize and excuse Choe's statements and behavior and the similar behavior of others. Not all protesters want to censor his art. But people should and must participate in the public discussion of this type of reckless and irresponsible behavior.

3:14m back again. I stand corrected as the mural has been taken down and it's safe to say the protest while a byproduct of opposition against him had something to do with it. I still don't see what the point of the protest was. The real protest should be working to lock him up if he raped at least one woman. His apology cuz he got called out is just that.

EVCM I never said protesting has no value, it obviously has value to the protesters, I just don't see it contributing to a concrete result outside of wiping this guy's mural off a wall. If this guy is indeed a rapist, he should face the music in court. I'm just not a believer in protests where action outside the actual protest isn't backing it up.

I think boycotting him and trying to get him locked up is the better thing to do. I'll concede that a protest at least puts a spotlight on him, but that spotlight was put on him before the protest. Women need to come forward and make sure this guy doesn't do to other women what he did to them, if he did anything.