FDNY says fire that started at Artichoke was accidental 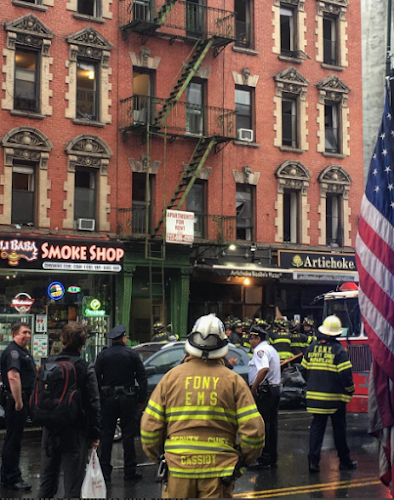 Per the fire marshals, the blaze "was accidental, due to heat from the pizza oven flue."

As previously reported, the two-alarm fire reportedly started inside Artichoke shortly after the pizzeria closed at 5 a.m. The fire spread from the ground level to second- and third-floor apartments through walls in the six-story building, according to the FDNY.

The Post reported on the way the pizzeria apparently learned of the fire: "A manager said he called 911 after a neighbor texted him a photo of the burning building."

The city has ordered a partial vacate on the building. An unknown number of residents have been displaced from their homes.

The pizzeria opened at 321 E. 14th St. between First Avenue and Second Avenue, in their new home across the street from their previous location, on Tuesday. We first spotted plans for the new Artichoke last November.

The new 14th Street location of Artichoke Basille's Pizza is now open
Posted by Grieve at 4:30 AM

the proprietors should do the right thing and pay for damages they "accidentally" caused. Certainly with this expansion, the fact they have other locations and a food fetish tourist attraction and a late night hot spot for the drunk and stupid, they can certainly afford to re-compensate the tenants of the apartments their workers stupidly torched.

Really, a fire happens approaching the last day at their original location, come on.

That new sign they have reminds me of the Kenny Rogers Roaster sign from Seinfeld. Which I bet will be blazing into the apartments that weren't smoked out.

Their pizza is awful too. Not worth the price. But it's better than 2 bros and 99 cent fresh.

What will be done to help the tenants who have been displaced? Does the building management, or Artichoke's management, or NYC itself have ANYTHING to offer these people? Or is this the ultimate in Bloombergian (and Trumpian) NYC: "good luck and don't let the door hit you on the way out"? People are out of their homes, thru no fault of theirs, but apparently NOBODY ANYWHERE is to blame for this - just effing unbelievable!

Since NYPD says fire was due to flue from Artichoke, that should lay some blame on both the business and perhaps on the building's owner for allowing a situation that was potentially dangerous.

I'd feel scared if I lived upstairs from their "new" location.

How is this an accident and not negligence?

It sure isn't comforting to anyone else who lives in an apartment above a restaurant in the neighborhood.

Imagine your apartment burns down, and you are told, "Oh, it was just an accident that couldn't be helped!"

If accidents like this happen, how can any restaurant be allowed to operate in a building full of apartments and people and pets?

Clearly the post says that the FDNY and their team of highly trained arson specialists determined the cause to be an accident. Act of God. Bad luck. Whatever. How doesn't anyone here know for sure what Artichoke is or isn't doing to help displaced tenants. Maybe they are but just don't feel the need to stand naked on 14th street and yell about it.

I know one of the displaced tenants - Artichoke has not reached out to any tenants directly or through the landlord/super. This is the second time they have had an issue with the oven - last December, firefighters had to kick down doors on the 2nd floor due to smoke rising from the pizza oven. Clearly, they never fixed the issue.

@3:12pm: Thank you for that info. I have never patronized Artichoke, and now I certainly never will.

Taking responsibility seems to be out of fashion, to say the least.

Apartment insurance is pretty cheap. Consider getting some (I did this year). And consider suing Artichoke or is it Artismoke if you lived in the buulding.

They did pretty well for an all cash business.