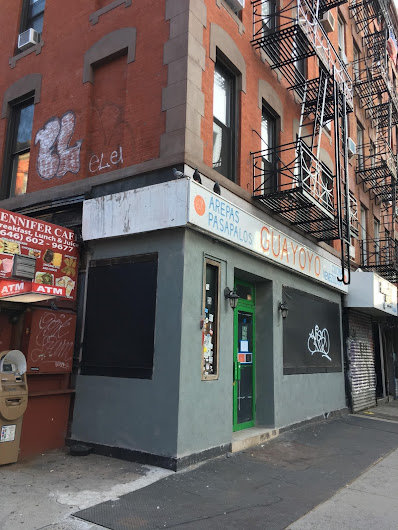 An EVG tipster let us know that renovations are underway at 67 First Ave., the former Guayoyo space on the northwest corner of Fourth Street ... 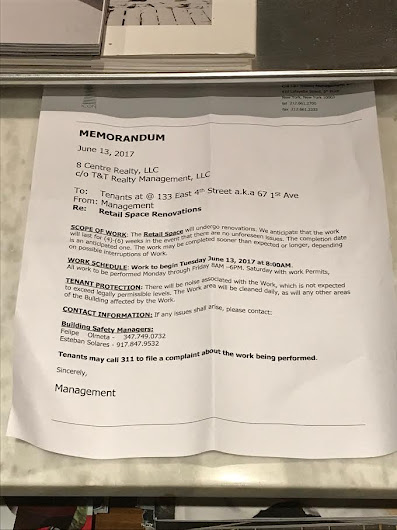 Signs on the door point to a venture called Mabi (or Space Mabi?), a gastropub... 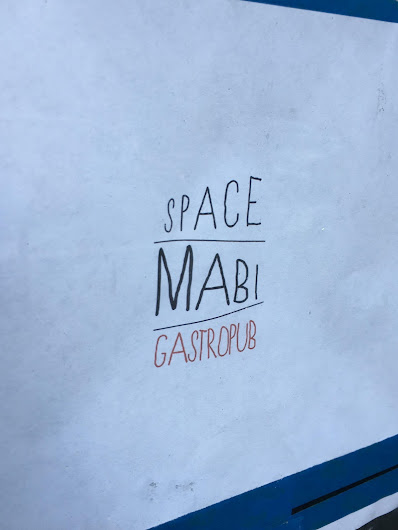 Their motto is "Your new playground" ... 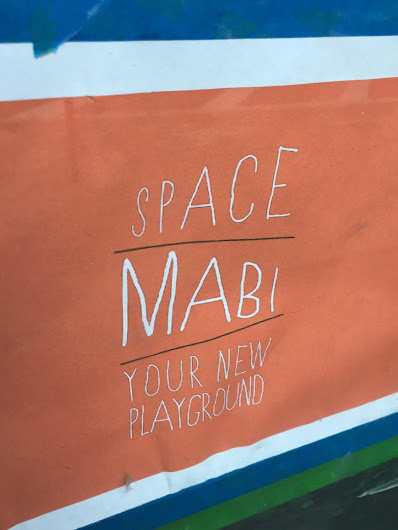 Guayoyo, the low-key, family-owned Venezuelan restaurant, never reopened after an early-morning basement fire on Jan. 13, 2015. In a follow-up inspection, Con Ed discovered a gas leak at the address.

In April 2015, an employee said they hoped to have the restaurant reopened soon. That never happened as repairs and red tape ensued with the landlord, Icon Realty, and Con Ed. (Read more about the situation here.) Guayoyo vacated the lease in August 2016, 20 months after the fire. A message posted on Guayoyo's Facebook page read in part: "Unfortunately we are forced to close the doors despite the efforts made to ensure its reopening during this year and a half of forced closure due to circumstances beyond our control."

Previously on EV Grieve:
Guayoyo has been closed now for 1 year
Posted by Grieve at 4:20 AM

Very apt. The whole city resembles a big playground now. This is going by the disturbing and annoying uptick of grown men commuting on skateboards.

Of course, playground in this new city means a place to get soused and behave repulsively.

Will this establishment have slides and monkey bars?

I could vex on the scribbly hip type font, the name, putting "space" before the name, the playground bit, the self proclaimed use of the term gastropub all morning. Exactly what is wrong with new businesses, dead on arrival, no soul sweat and heart in building something, just another cross hair on the easy money.

Okay those us that expect the worst from an "adult playground" will complain about the for certain rowdy bar / pub, noisy drunk patrons, car horns at closing time (4 am?) and downgraded quality of life living nearby. Other will comment "you people hate change, you complain about everything, I love their deep fried twinkles, this has always been a loud party neighborhood (I know because I've lived here for 3 years). Let's keep a tally.

an anonymous 9:56 real grown up is heard from

"you people hate change, you complain about everything, I love their deep fried twinkles, this has always been a loud party neighborhood (I know because I've lived here for 3 years).

if you are not being sarcastic then you certainly got a response from me. wow, you've been here all of three years and so you know what it's been like here forever?

this is not a contest, nor does living here longer than three years mean much other than experiencing the history of the changes of this neighborhood from residential to party destination for mindless, loud, inconsiderate drunks, students and tourists.

Tenant's that received that memo from Icon BEWARE!

Icon has been "renovating" my building for years now and I have hundreds of those memos. It is all lies and Icon with do what ever they want; whenever they want to do it!

Scope of work: 4 to 6 weeks means 4 to 6 months to ICON.
Work Schedule: As late as they want; whenever they want
Tenant protection: None; unless you move. If you are Rent Stablized/ they want you out.

Just a word of advice, CALL 311, make reports, do not trust anything that is in that memo. TRUST ME! I have years of experience. I am so sorry about what you guys are getting ready to go through.

I admit sarcasm is hard to do in writing but I find it interesting that you thought my comment was written by someone that has live in the EV for "3 years". I was simply giving examples of the kind of comments typical seen when a new drinking establishment announces it plans and dresses it up with hype aimed at the millennial customer. I have been here since 1981 by the way and reading EV Grieve has been helped me keep up with all the changes, good and bad, happening around us. I also enjoy the comments, leaving them now and then and getting a chuckle from the many witty ones.

It's a shame what Icon did to the Guayoyo folks. It was a great little place and I miss it. I see the Icon logo on more vacated storefronts than any other landlord in the EV so I 'm sure they've done it to many other businesses and will continue to do so at every chance, as long as there's another buck for them to make.

There should be a fuckin' law.