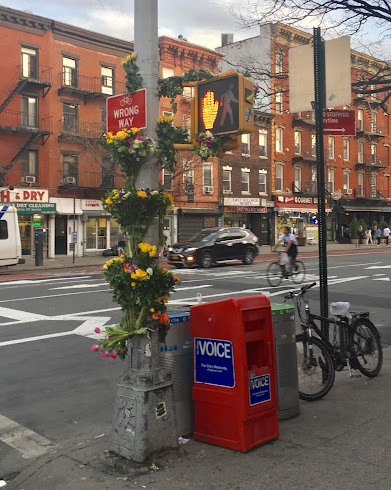 NYPD offers explanation into Kelly Hurley's death: 'she slipped'
Posted by Grieve at 4:35 AM

2 and a half months later, those responsible to serve and protect the public with courtesy, professionalism and respect come with to the right conclusion.

I wonder how they determined the driver was at fault.

So will he get one slap on the hand or two?

Not for nothing but these bike lanes are worse than when they were never there. With current bike lanes a driver who comes in from the flow of traffic ONLY slows down to make a left, never really stopping. And can hit a biker. The old way when cars were parked by the side walk, cars were force to slow down and stop before making the left or else they would miss the turn. This is my opinion as a biker. Sure it does seem safer with a bike lane but at these mixing spots its dangerous.
So sad two lives are ruined because of an accident.

As reckless as the man was I doubt his intentions were to kill someone that morning. He may possibly be an immigrant maybe not, he most likely will not have an expensive lawyer to defend him since he drives a truck so he will most likely receive a much harsher sentence than an investment banker driving a Mercedes would have in the same incident.

It won't bring her back, but I am relieved that this man has been arrested. He must pay for his crime, and his license should be taken away. How awful that a person had to lose her life so this guy could make an illegal left turn to save a few minutes on his route.

@9:11 that's what the manslaughter charge is for. Intended or not, his negligence ended someone's life that day.

A Krasdale semi-articulated trailer truck made a sweeping left turn from the right-most, curb-side lane of 1st Avenue this morning at this very same intersection. The truck swept through a pack of cyclists, causing two to stop mere inches before the truck ran them over.

I think one of the problems are the speeds at which some people are cycling. A driver will look to the left before turning left. They will see a pedestrian in the crosswalk and a cyclist within their peripheral vision. But once the driver commits to the turn you're on your own as a cyclist. This means that any car ahead of you as you approach an intersection is a potential threat. When a driver cuts across several lanes of traffic even defensive cycling might not save you. Rest in peace, Ms. Hurley.

People make left turns from outside the turn lane all the goddamn time. Happened in front of me twice yesterday alone. An intelligent civic approach, one that was actually concerned about improving traffic safety, would penalize these drivers. Now excuse me while I go literally laugh my ass off.

As a biker I now assume that every motorist I come across is slow-witted, homicidal, browsing the internet and sipping on a frappucino all at the same time. It's only way to stay safe. We live in a community where law-abiding good citizens actually fear the NYPD. So you better believe that nobody gives a shit about your safety out on the street.

@Erin
I don't disagree with you my point is our legal system is hardy fair when handing of sentences. Will other drivers think of this woman death when driving too fast up 1st avenue or taking a sudden turn onto a street? Certainly not, which is why there must be physical changes to these lanes and lights to prevent another injury or death in the future.

The problem with the Vision Zero law is that it is rarely used to charge drivers who injure pedestrians, and penalties are too light. Vision Zero is handled under the City's Administratve Code as a traffic violation, with the maximum penalty of a $250 fine and 30 days in jail. Hardly anyone is being charged under the law. Only 15% of drivers who actually kill a pedestrian are charged. And out of 20,000 pedestrians and cyclists who were hit by a driver during the first 2 years of Vision Zero, only 10 were charged. 10! The law is basically a PR stunt to scare drivers and make the public feel safer, but neither is happening. Even more bizarre is that while overall deaths from traffic accidents are down, deaths of pedestrians and cyclists are up! So drivers may be going slower, which means they and their passengers don't die as often in City traffic accidents, but they are still going fast enough and/or driving recklessly enough to kill even more pedestrians and cyclists. I don't know what the solution is, but Vision Zero isn't it.

As a driver in the city, you now need to really check behind you when making a right or left turn. Bikers can creep up both in the bike lane and even in regular lanes (along parked cars) in the time it takes to slow and complete a turn. While bikers have the right of way, it's a situation almost set-up to ultimately end tragically (as this case showed)

I've had many bikers come up alongside the car when turning. It's another thing to have to watch out for in addition to crossing pedestrians. It's just the new order now that bikes are more popular.

> these bike lanes are worse than when they were never there

HAHAHAHAHA That's nuts. I did deliveries for years. Later, the first time I experienced the bike lanes I was amazed how much safer specifically 2nd Ave is now. No worrying about being hit from behind by a car, which can really ruin your day I speak from experience. The intersections are still dangerous but no more so. What's going on is new jack bikers with a false sense of security because of the lanes. They are watching for pedestrians, as they should, but don't have the peripheral vision needed to survive in traffic pre-bike lanes.

Tragic the lady got hit by a truck. I got hit by a cab making a legal left turn but am still here to type. But bike lanes more dangerous? Nope.

Thank you, Giovanni.
On point, as usual.

@Giovanni - Yeah Vision Zero is no more than a slogan. For some reason the city sends suits to pitch it at tech conferences - big data? wtf - and it's never more then professional and forceful press release vapidity.

There is no solution unless a consensus develops around making Manhattan much less car friendly. Then we'd deal with an age of bike v pedestrian but less fatalities. But that's not going to happen like ever. The bike lanes seem a total fiasco in Brooklyn. Bikers say they do nothing and drivers are either annoyed or using them as passing lanes or both.

Totally agree ^
You have to have 10 eyes' to watch your ass riding a bike in nyc ..
Even the bike won't save you .. that's where all the idiots ride on the weekend

Glad he was caught. Leaving the scene should warrant more than a desk appearance ticket however and for that alone should get jail time. But won't. As to zero tolerance. This should also apply to cyclists who in increasing numbers feel traffic laws are only suggestions and don't apply to them. The area in question needs draconian enforcement of traffic laws for both vehicles and bikes.

The bike lanes seem a total fiasco in Brooklyn. Bikers say they do nothing and drivers are either annoyed or using them as passing lanes or both.

The bike lanes are also extra parking! (No matter how much parking there is, drivers will always say there's not enough.)

Someone needs to tell the Bodega on the South East Corner to tell the companies that deliver to them to stop making this dangerous left hand turn after they drop off their goods.