Report: Polish G. I. Delicatessen is closing at the end of the month 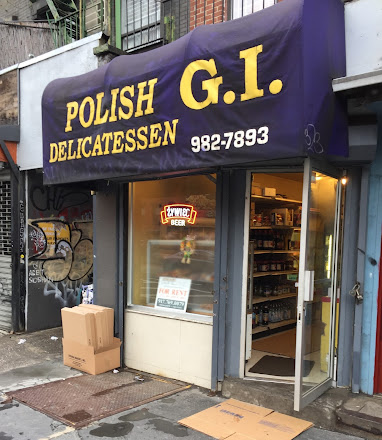 Rumors started circulating back in January — prompted by the arrival of a retail listing for the space — that the 21-year-old Polish G. I. Delicatessen on First Avenue between Sixth Street and Seventh Street would be closing. (A for rent sign also appeared in the front window in late March, though we were told that this was not for this space.)

Eater got confirmation yesterday that the Eastern European specialty foods shop will be shutting down at the end of the month.

However, multiple readers told us that chef-owner Grace Iwuc was going to retire. In addition, the listing for the space notes that "the owner is retiring and selling her 10-year lease of $2,600/month."

In any event, here's New York magazine with a description of the store:

Polish G. I. Delicatessen is among a disappearing breed of Eastern European specialty-food stores that were once common in the East Village. The initials stand for its sunny owner, Grace Iwuc, who has steadfastly provisioned loyal locals since 1996. The front window is packed with locally baked Polish-style breads, and the narrow but deep space is stocked floor to ceiling with a variety of instant soups, bags of roasted buckwheat, jars of sauerkraut and marinated sweet peppers, and jams imported from Poland.

And The Village Voice...

It's rare to find a shop like G.I. still active in the city these days, especially in an area as highly developed as the East Village. But even if you’re not a fan of mushroom soup or Old World–style ham, it's worth a visit for a real taste of the neighborhood.

My heart has just exploded with grief. Grace and David, such lovely people, how you, your wonderful food, and the ambience of your store, from another time and place, anothee New York, will be missed.

This is a real tragedy,such special freshly prepared food & pastries!One of the Last such emporiums in the area,nothing else like it left ,in
a neighborhood once rife with them.The owners so warm and personable will be woefully missed.Another one bites the dust as the landlords
Continue the Greedy tax abated money grab massacre of such precious now extremely rare Gems!!Bad bad news for all of us!

Enjoy your retirement — thanks for being a great local business these last 20+ years.

Tom read the article before you post....No Landlord issues they are RETIRING with 10 years left on their lease.

Dumb idea to retire completely, if that's what they're doing. Have someone run the business and take a little piece of it instead.

Agreed, a wonderful store and another profound loss that will not likely be replaced in kind.

too bad
this is one of last tiny local stores packed full of some of the best home made and imported specialty foods. not much run of the mill stuff there.

it is not clear from the post that the are retiring but it matters little if they don't come back and open a store.

Seems there are two possiblities here - losing the location, or the desire to retire. I'm very sorry they won't be there either way, but for them to lose that spot after so many years is just not right. This is a wonderful little store. I don't know how long it's been open, but I've certainly been buying their delicious ham and other foods there since the 80's, and I'm pretty sure it was there well before that. Please update if you get more news.

The BEST sausages. Man I loved those things. And the preserved gooseberries and chocolate prunes. I am bereft!

Been shopping there for thirty years; you will be missed. Enjoy your much-deserved retirement!

It's not the landlord - I live above them and share the same landlord who is just as old school East Village as David and Grace. He wouldn't raise their rent - he's one of the last old school landlords around. I will SO miss them!! Not only are Grace's perogies better than my grandmothers were, David is the mayor of 1st Avenue, always saying hello to everyone and feeding all the dogs that come by the ends of the deli meat they sell. And we always felt protected because David watched out for us. I am going to miss my morning hello from them - and having them as neighbors. Damn, I am so bummed out. The East Village I once knew is totally gone now....

Their closing will make the nabe more bland. But why give up a 10 year $2,600. lease and come back in 2 months somewhere else and pay what? $5,000. for the same space? I guess it's hard to convince yourself it's over and just say goodbye.

Boy does this one hurts. I discovered this gem when I moved onto St. Marks 8 years ago. David is a great guy, always cutting off a slice of the kielbasa and pointing it at you (right on the knife) and insisting you take a piece on the house. And Grace in the kitchen cooking up fried fish on Friday's and Saturday's. Great breads, condiments and such a pleasure to pop in there around the holidays. You could always here Polish being spoken while waiting on line. Anyway, nothing stays the same forever. Enjoy your retirement, you've certainly earned it.

Sad. But I feel the place was never the same after that month or two long fateful remodeling some years back. Before, it used to have a long counter and aisle, and pretty young Polish girls behind the counter would make you food. Then they put the counter in the back and shrunk it, and it was just Grazyna and the dude.

Well, I just spoke to David - they've pretty well cleaned out the store because they're moving to a new location. Going on vacation for two months, and then will re-open on 9th St between, um, I forget. 1st and 2nd? 1st and A? Anyway, he had me take a picture of the sign because it has their phone number which goes to his cell phone and we can call and confirm around the beginning of September.

Oh, please God, make this all work out.

I bought one of the last paczki this afternoon. The store has basically emptied out. Good for the owners, so there's less moving to be done. Really hope the relocation would work out, too. They should really hire a third person, just to help out around and perhaps to teach making traditional Polish foods. I would send in my resume! Salary negotiable. :)

@Kim - there already were 3 people working there. Grace's sister Irene worked in the back making food. (She's the I of "G.I."