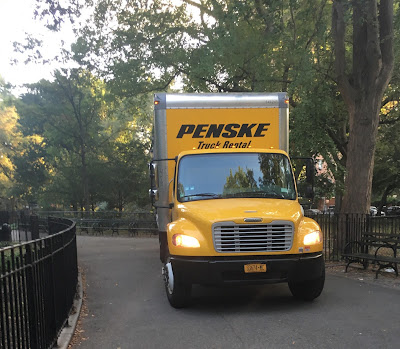 Workers were out in Tompkins Square Park this morning... delivering and installing more solar-powered, rat-proof trash cans — the Big Belly — in the eastern section of the Park. 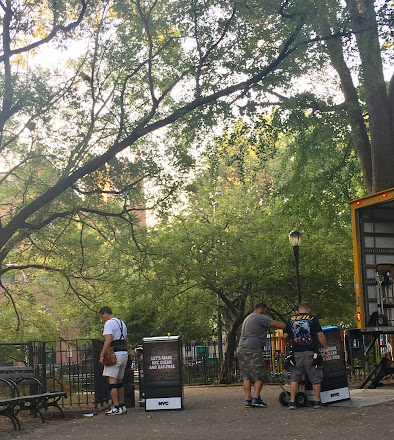 They are taking the place of these ... 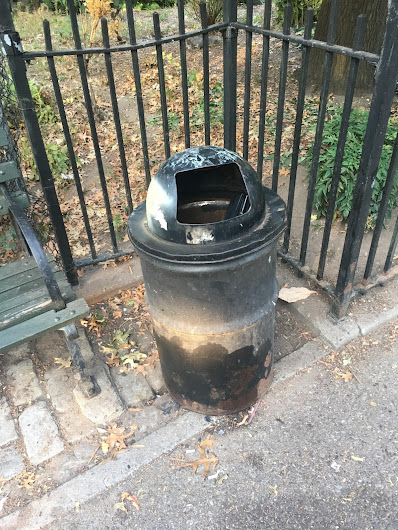 ... which do not provide much protection against hungry critters ... and whose circular design doesn't display art as well as the Big Belly model... 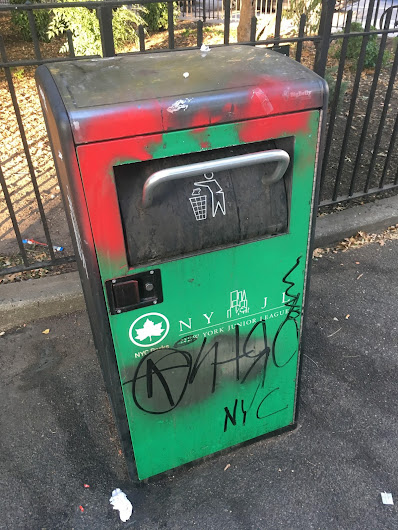 One of the workers said that they were delivering eight of the new trash receptacles to Tompkins Square Park. 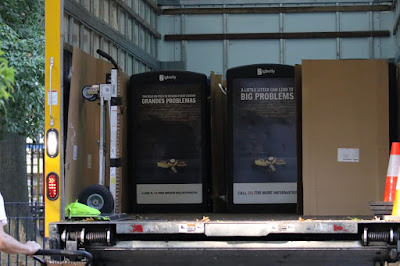 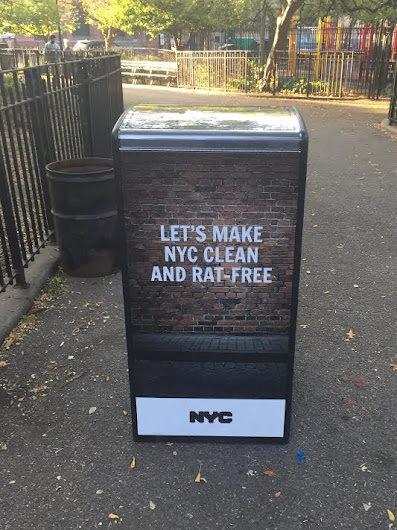 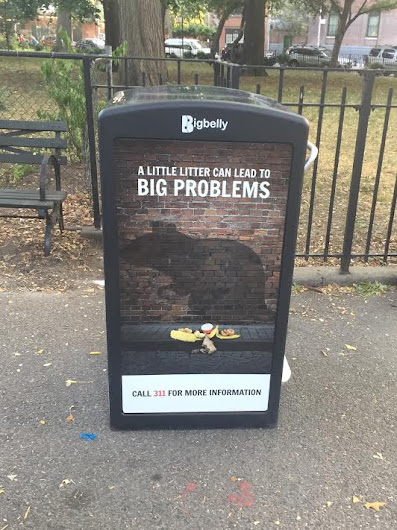 The high-tech trash cans are part of Mayor de Blasio's $32 million plan to help reduce the number of rats in several neighborhoods, including the East Village. The first batch of the new Big Bellies arrived in the Park in July.
Posted by Grieve at 9:43 AM

The problem is when the BigBelly™ gets full and people don't want to carry their trash with them, so they just pile it on top.

Kind of defeats the purpose of having a receptacle to put it in, y'know?

God, did anyone ever think they would be nostalgic for trash cans? TRASH CANS!? WHERE ARE OUR POLITICIANS? I'll answer that... in the belly of the beast.

The question is: how many rats can you fit inside one of those BigBelly™ crushers? I'm sure there must be some kind of animal cruelty issue associated with this type of rat disposal program. Oh wait, you mean we supposed to put our garbage inside of those things? And that's supposed to stop the rat problem? Ha ha Ha. The joke is on whoever paid $8000 a pop for these things.

During the warmer months when many lay out on their towels on the lawn in Tompkins Park, I've always wondered if rats are hiding underneath their little holes. Doesn't that ever bother anyone? I've see rats scurry across before. I don't get it.

I think the newer trash cans are a good thing. The less rats, the better.

Looking forward for Big Belly to apply for a liquor license and indubitably and wholeheartedly approved by CB3.

What's with all the Rat discrimination ?

Giovanni that comment made me giggle. Sadly this isn't a problem that can be chalked up to greedy politicians. It's just sort of sad with the actual plethora of cans in the village (practically 4 at every intersection) people just dump on the ground if the nearest can is full. I don't get that kind of filthy behavior.

Do not fear this device. It certainly will not scan your DNA to repopulate the city with docile clones.

waste of our tax money, again

"Leave.the rats.alone." in Perry from The Wanderers voice:

To all the moaners and groaners: the BigBelly lights up when it's full, so whoever empties them can empty more full cans than spending the time to empty half full cans. What I don't know is when Wi-Fi is enabled on these, if they send an SNMP trap to indicate they are close to full, so there can be more efficient pickups.

And like Kd/0 said, Americans in general are a bunch of goddamn lazy slobs. I had one guy wedging the paper plate from a pizza into my building's front door knob when I was right behind him, and when I cursed him out, he said that the trash can was too far away, which was on the corner, two buildings away. What a mofo.

The rats aren't the problem. The humans are the problem. Humans who don't use any kind of garbage can, large or small, empty or filled, round, square, techie, old school....it doesn't matter to the pigs that call themselves humans. They don't care where there trash goes. I love to imagine that these people are living in absolute squalor at home as well. That is my revenge.

I agree that the real problem is the nasty behavior of the people who either live here and don't care or are passing through and act the same way. The new cans will help some but if people are lazy and slobs, nothing will keep the rats at bay.

These ones also have foot pedals, so you won't have to touch the handle with your hands. That's pretty cool!

It’s nice to find out the reasoning behind these garbage cans. I agree with cmarrtyy, I never thought I’d be nostalgic for trash cans! These get kind of gross and impossible to use when full. Not only do I not like having to touch the garbage cans sometimes I don’t have a free hand to pull the handle. I just want to be able to toss my dogs poop bag or whatever and go. But I am thankful something is being done about the rats. The lepto they carry is pretty scary