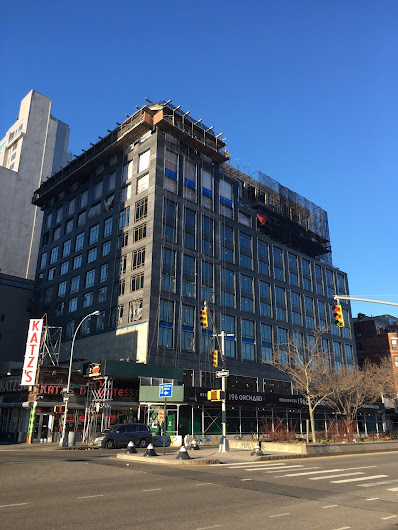 An EVG reader who had been away for a little while wrote in to discuss Ben Shaoul's in-progress condoplex on East Hosuton between Ludlow and Orchard.

Per the reader: "Jesus — that is a monstrosity over Katz's."

Anyway, here are a few photos from Sunday showing the progress at the 11-story 196 Orchard St., which will include an Equinox in the retail space... it's nearly bricked all the way up — with windows too... 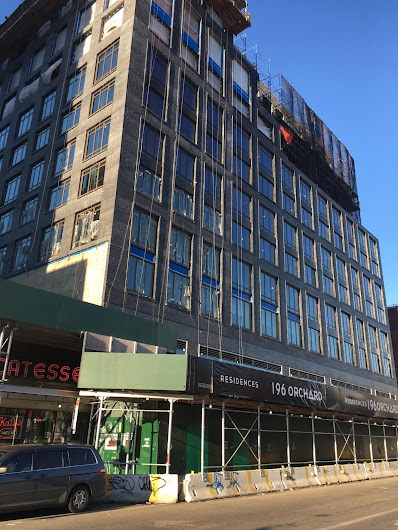 As for those bricks (as noted before), the developers allegedly went a long way for them... 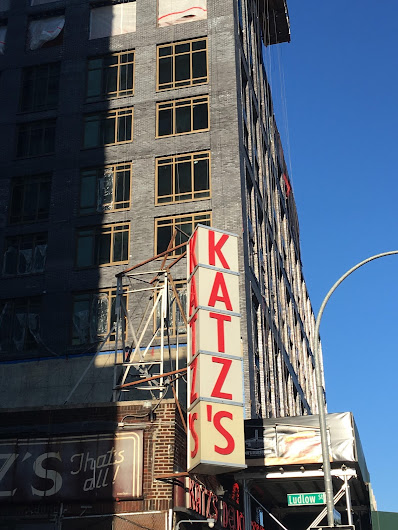 Back in late January, Architectural Digest took a look-see at the project and heard from Adam Rolston, creative and managing director at INC. Architecture & Design.

“We felt that a traditional glass structure didn’t mesh with the surroundings,” says Rolston, who looked for a material humble enough to belong in the neighborhood that had been home to waves of immigrants over decades, but luxurious enough to attract a contemporary resident.

He found such a candidate in artisanal Spanish bricks infused with gold dust that will gradually oxidize and become darker over time. Produced by the 130-year-old manufacturer Cerámica La Covadonga, the bricks form the instantly recognizable lower exterior building façade and were flown in from the Spanish village of Cadaqués (also known for its anchovies, and a source of inspiration to the painter Salvador Dalí). They symbolize the eclectic and transformational nature of the neighborhood.

Sixty-thousand bricks were used for the building, each infused with 24K-gold dust. 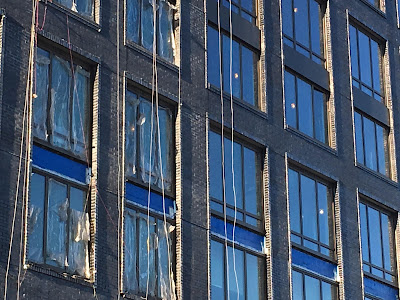 Send a salami to your boy next door in the condo
Posted by Grieve at 4:01 AM

Is this one really that bad compared to many of the other big ones nearby? I feel like it sort of fits in at least (despite the size) and like the bricks.

I think referring to it as a monstrosity is a little unfair. Not sure if I believe the story about the brick, but at least it isn't simply a glass and steel box. And yes, it's giant relative to Katz's, but it's probably a little difficult to build to the original scale of the neighborhood as well as satisfy the need for more housing. And given the neighborhood, $965k for a new-build studio (sadly) doesn't seem especially out of line.

I'd love to see a new building that's scaled to the same size as the old tenaments, with plenty of units coming in 25% cheaper than this, and with enough margin to support some true affordable housing. I don't think we're going to get that anywhere within easy walking distance to a subway anytime soon, and if we do, I'd be somewhat worried about the economic health of the city.

Katz doesn't know it yet, but that building is going to be bad for business.

I just can't see one of those vain fitness addicts going to get the legendary pastrami sandwich after working out.

I just can't stop laughing when developers or their architects sling the BS about famous artists when describing the mundane such as this block of grey bricks. This looks nothing like a tenement nor does it come close to paying homage to this once "vibrant" immigrant neighborhood. We. would all get along better if they just told the truth, an ugly nondescript cookie cutter early 21st century building which is advancing the hyper gentrification of the lower east side. A building which adds nothing culturally unless you think a chain health club as culture.

It is a monstrosity to go along with the other monstrosities on East Houston and below East Houston, such as The Ludlow. Then there is the 10 story office retail monstrosity going up where the Sunshine Theaters were. I hate places like the Equinox gym. (Venting for the day concluded.)

And here's a true fact: 24k gold can't oxidize. It's physically impossible. It can catalyze certain oxidation reactions, but only under laboratory conditions and not in stupid bricks.

Who the hell knew that gold dust could be so ugly?

I hope these apartments come with 24K toilets like the one at MoMA.

24k gold dust bricks are like shooting canon balls at a fly. Overkill. The design is so ordinary. Actually they have no humanity about them. Good design for living spaces has a sense of people. The lower easide development has the look of an office park. And it used to be so vibrant when it was poor.

It doesn't fit in with the neighborhood, it doesn't acknowledge the history of the surrounding area, it's a structure that ignores and intrudes on it's surroundings. It does fit in with all the generic crap architecture going up on the Lower East Side. These buildings are a downgrade in design from cold war iron curtain cement apartment blocks. Though they may be marketed to snobs they will crumble eventually.

I officially dub Ben Shaoul’s addition to the Houston Street Horridor “The Fool’s Gold Brick Palace.” The fact that he didn’t even want to use Houston Street as the address of the buiding, the majority of which faces Houston Street, tells you all you need to know about this ugly brick shithouse.

That was at the Guggenheim, not MOMA.