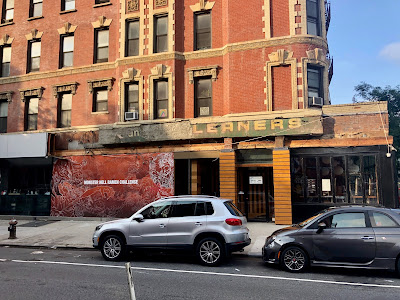 In recent days, a crew has been working on 188 Second Ave. at 12th Street ... where they have uncovered some ghost signage — LEANERS. 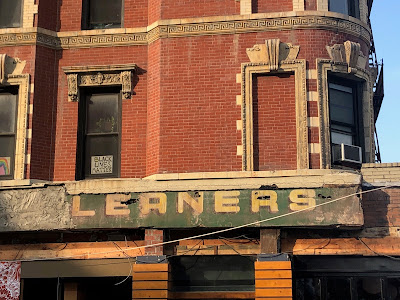 This was likely one of the many shops in the area specializing in horseshoes. Leaning, of course, is the throw of a horseshoe so as to lean against — but not encircle — the stake, a game popular in early saloons. In a different era, it became a place for Leaners, who have attitudes and behaviors that are very similar to those of partisans.

Kidding, it was a cleaners of some sort.

The space is currently home to Strings, home of the Monster Hell Ramen Challenge.

Thanks to Shiv and everyone who sent in photos of the signs!

you almost had me there Grieve! :-)

This was R&S cleaners before it was that Japanese restaurant Shima. And YES the cleaners did eventually move down the block to where Numero 28 is now.

All the Leaners are ruining this city!

I still can't figure out what "Strings" is about, but from what I see of their menu and the "Monster Hell Ramen Challenge" it looks like they're in business solely to cater to the bro's, so I've never gone inside. If they're trying to be off-putting to normal adults, it's working very well.

Good try, Grieve, with the Leaners :) I think more likely a distribution point for Gleaners.
See: Agnès Varda’s "The Gleaners and I" https://www.villagevoice.com/2001/03/06/scavengers-uncover-a-mother-lode/
Also, the more recent story https://www.nytimes.com/2020/07/06/dining/gleaners-farm-food-waste.html

If I have my NYC geography straight, the corner of 12th and 2nd was the Cafe Royal during Yiddish theater days.


Yes, the address where 'Leaners was found was Cafe Royal - when Second Ave. was the Yiddish Broadway.
In 1937 the New Yorker proclaimed "Everybody who is anybody in the creative Jewish world turns up at the Cafe Royal at least one night a week." Think Charlie Chaplin, Gershwin, Marx Brothers, Rachmaninoff, Sarah Adler, on & on ...... and the gangsters Bugsy Seigel, Louis Lepke, Lefty Buchalter, Charkie Garah. Even Albert Einstein was said to stop by for a Che cafe and palatschinken...