Let's stroll through Tompkins Square Park on this June 1, 1967 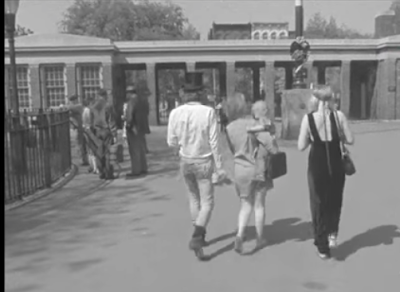 Fans of the Grateful Dead likely know that the band's first East Coast outdoor show took place on June 1, 1967 — right here in Tompkins Square Park during the Summer of Love. (We wrote about it here.)

A recent article about the gig on NYSMusic.com provides more details on how the show transpired and why the NYPD asked the Dead to play in Tompkins Square Park ...

[The hippies] that had descended upon Manhattan’s Lower East Side grew fond of playing their congas and bongos at the park. Puerto Ricans, the neighborhood majority, wanted their music to be prevalent and the Black community also fought for control of the musical output. Over the last few weekends, fighting at the park had become rampant.

Most recently, 38 people were arrested at Tompkins Square Park on Memorial Day after being confronted by police for sitting on the grass where they were playing music, both park violations. Per a Village Voice article from June 8, 1967, "A couple of cops went over to the park and told the hippies to shut up and get off the grass. The kids laughed, and kept singing. The cops ordered them to leave. 'They laughed at us,' patrolman John Rodd explained. 'That's when the trouble began.'"

Throw in all the other issues that the summer of 1967 undoubtedly brought and it becomes clear that local police were in danger of losing their city, as far as popular opinion went, and needed to rethink their tactics.

Part of the NYPD's plan: a free show by the Grateful Dead.

After some initial reluctance, they were nudged to accept after lead guitarist Jerry Garcia spoke up, seeing it as a chance for outsiders like them to bring another community together via music.


The NYSMusic.com post includes a 5-minute video clip that was new to me via the Associated Press that shows scenes from the Park on this June 1, 1967... and in some places (RIP the bandshell!), the Park doesn't look all that different 53 years later... 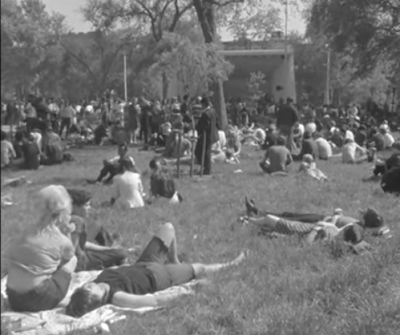 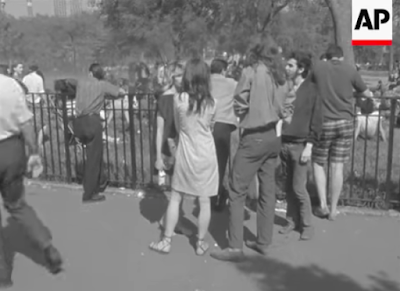 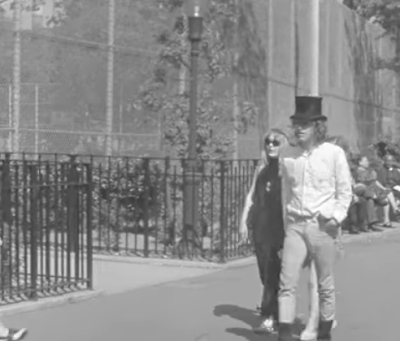 As the details on the video note: "Some 3,000 'hippies' found a place for themselves in the sun of tompkins square park to show police that they cannot be intimidated" ... please note that the first two minutes of this clip does not have any audio...

that top hat warms the cockles of my heart. where is he now?

Wow the bandshell was huge!

besides todays prevalence of spandex (yoga pants) people look pretty much the same as today. The bandshell was a lot larger than I remember it, thanks for sharing this.

HOLY MOLY! I am writing a series of middle grade novel about 2 little girls who live in the East Village, much of the action takes place in Tompkins. I literally wrote a new chapter this past weekend where they are at a concert in the park and the dad tells them about the old bandshell and that The Grateful Dead even played there once! Crazy timing!!

So fucking cool. I wasn't alive during this period. It must have been awesome though to witness the 60's in NYC. Thanks EV Grieve for sharing this.

Pigpen receiving the key to the east village. Groovey!

Wow, incredible footage. From some of the shots you can see how young the sidewalk trees are along the park on Avenue A.

For a minute I thought it was the Halloween Parade.
I miss the old band shell. So much forlorn possibility.

I was 3 years old living across from Tompkins Square Park on Avenue A during 1967. I remember seeing the hippies growing up and listening to the sounds of bongo drums playing back then. Interestingly enough, I was a dead head in high school in the 80's. I only wish I had attended this show as a toddler! And now I still live across the street from Tompkins Square Park! Wish we had concerts like this now......

Great footage. I did not realize the hair styles for men were that long in 1967. And the hair is very shabby. I remember having very long hair as a kid around 1971/72, that was like the apex of long hair for the general public. Interesting also to see the variety of clothing that day with some older men in suits and ties, some with trench coats. Others in short sleeves and shorts. Also the footwear was interesting. The short clip of the toddler and the Newfoundler dog was cute. In general people still dressed better for such a casual occasion than they do today.

This footage brings back a lot of memories. I'm the guy you can hear singing from about 2:50 on, and see in the striped shirt on stage towards the end.

How did these dope ass people become boomers, just saddens me that this generation that was inspiring so much change so quickly and easily sold out.

Not all Not all and I'm one of them. Fantastic post!

My first trip to topkins was the summer of 1965. We were at camp in Harriman state park. My new friend Louise had an older sister who lived around the corner with a Jazz upright bass player. We hitched from camp to her sisters. No drugs yet. No nothing. But I have as scared to go out. A Brooklyn boy, Brooklyn was like the country then. By the following summer everything changed.We had the electric lotus the first nyc head shop, the electric circus and a new way of looking at everything.

We did not ALL change. I was there & live in Topanga Canyon. Still an artist & promoting peace. Lots of us still around!

@9:33pm: How long until another generation says it's YOUR generation that "sold out"? Not long now, I think. Just wait & see. You can't imagine getting old, can you?