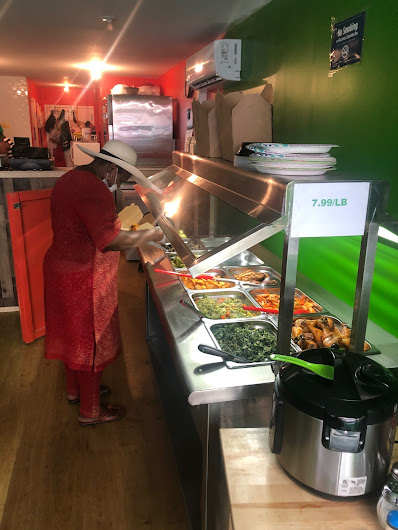 Reposting this info that originally appeared on EVG on July 3. 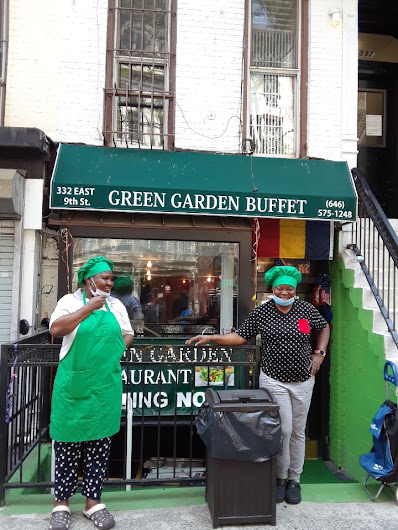 For the time being, owner Tamika Gabaroum or one of her assistants will serve you at the door from a buffet setup that's billed as healthy French food. (Another reader described it as Chadian, as Gabaroum is originally from Chad.)

This system is still a work in progress. You need to indicate just how much you want of the daily menu items. On my last visit, I had the okra, sautéed zucchini, sautéed spinach with garlic and baked sweet potatoes. (They also usually have a meat or fish of the day too.)

Gabaroum is a former public health advocate with the Peace Corps who served in UN Peacekeeping Missions in the Democratic Republic of Congo. She was an early recipient of a loan last summer as part of the East Village Revitalization Loan Fund for small business owners. (You can read more about the partnership with City Councilmember Carlina Rivera and community advocates here and here.)

i am going to walk over the goddamn bridge from brooklyn to get those sweet potatoes! yum!!!

This sounds delicious and I am pretty sure once my kid finds out about it they won't be eating at home.

Too many good ideas go south business-wise or are otherwise unnoticed because there is not enough presence online. For better or worse, that is the way a lot of people learn about new businesses

^^ Absolutely agree with 1:23pm. In this day and age a online presence is going to make or break them. In the days of takeout only and social distancing many people will only see what they have on offer online. Even if its just a cellphone camera and a insta account, hopefully some pictures come soon.