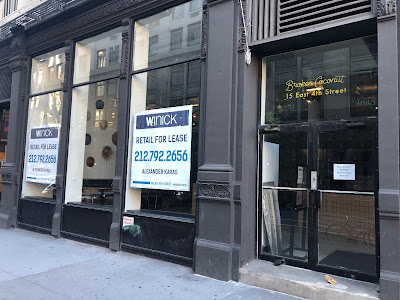 A roundup of some recent restaurant-cafe closings during the COVID-19 crisis...

For-rent signs are now in the window of the Instagram-friendly (#EatPretty) health-focused cafe that served items like quinoa parfaits and coconut chia. Broken Coconut opened in September 2017 in the storefront that was Other Music for 20 years.

Scott Sartiano, the nightlife impresario who founded 1Oak and Butter, is behind the venture. The BC outpost in Equinox Hudson Yards is open. 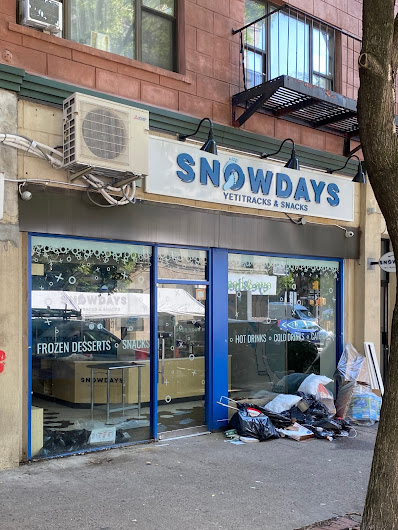 The dessert shop specializing in Asian-inspired shaved frozen cream (aka snow cream) has been cleared out... 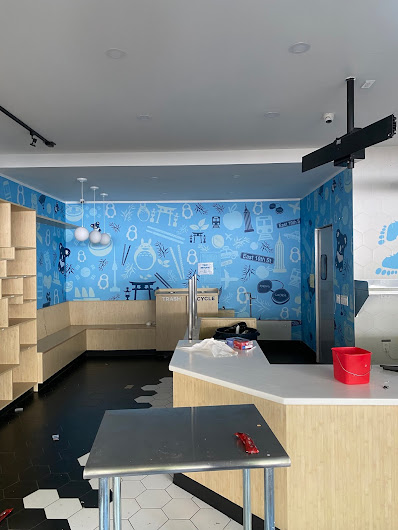 The business, originally called Snowdays Shavery, opened here in August 2014. While there hasn't been any official notice of this closure, the storefront is on the rental market. (H/T Upper West Sider!) 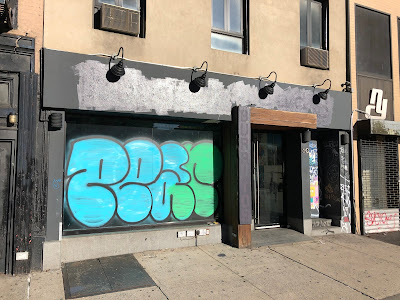 That's all for the East Village location of the big burrito specialists from the folks who launched Benny's. As the above photo shows, someone has painted over the Blockheads signage on the now-empty storefront.

And as we've seen with other restaurants with multiple NYC locations (Mermaid Inn, 99 Favor Taste, Oddfellows, Ravagh Persian Grill), the East Village has been scratched in favor of outposts in other neighborhoods. Blockheads is running operations on the Upper West Side, Midtown East, Midtown West and in White Plains.

Blockheads opened on Third Avenue in July 2015. Blockheads did not respond to queries about this location. 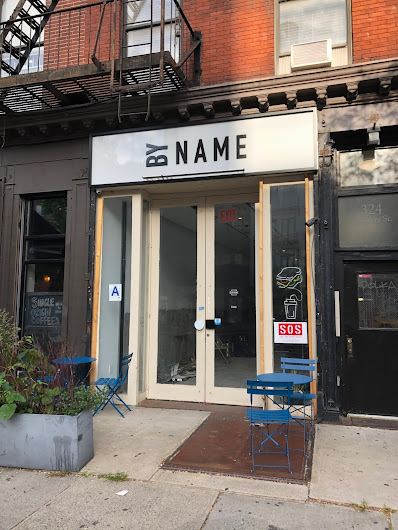 • By Name, 324 Bowery near Bleecker Street

The "art-inspired cafe concept" sold a variety of fruit-milk teas and bento boxes, opening in the summer of 2019.

There wasn't any notice of the closure, with the By Name website going offline.

This space was once Agozar!, the Cuban bistro-bar that closed in November 2017. The other part of the former Agozar! is now Codex, which sells used and new books with a focus on literary fiction and art.

There are at least a dozen other spaces that are dormant... spaces that readers-residents wonder if they will reopen. Waiting for confirmation on these — from either ownership or in some cases a for-rent sign. Some places that were shutdown the past six months are returning. Ainsworth, the high-end sports bar on Third Avenue at 11th Street, looked permanently shuttered with St. Patrick's Day notices on the doors. However, they are reopening later this week.
Posted by Grieve at 5:00 AM

For the love of God, please do something about this political representatives. We can't go on like this for much longer

I've been wondering about Sophie's/Mona's/Josie's as they've been shut since March. Same with Mancora, the Peruvian restaurant on First Ave & 6th St. There's also retail like Timbuktu on 2nd Ave that seem like they may be gone for good.

Do something about it? They caused it. Stop asking the government for handouts. They're incompetent.

Let the zombies crash and burn. Its painful and angering to watch but the taxpayers shouldn't be on the hook. The politicos created this situation - any legislation would just profit themselves.

Yes, we can. You will survive even without a dozen food shops on every block. Rents will collapse, new places will open, they could actually turn a profit, and maybe, just maybe, won't charge you those ridiculous prices we pay only in New York.

Ainstworth is putting up a big outdoor seating area on 11th St. even as I type this.

99 Favor Taste haven't been shut off yet.

Totally bummed out about Snowdays.