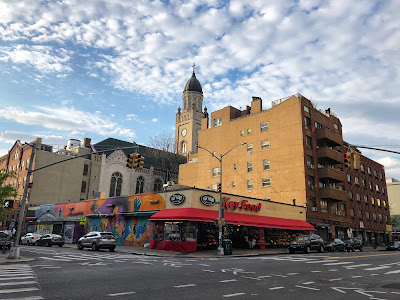 • Woman punched in the head in a robbery while exiting the L train on 14th Street and First Avenue (PIX 11)
• A Q&A with Eric Sze, the co-owner of 886 on St. Mark's Place and founder of the grassroots initiative Enough Is Enough (Eater)
• Events for Lower East Side History Month (Official site)
• Asian American history in the neighborhood (Off the Grid)
• The number of NYC pedestrian fatalities is up 65 percent in the first four months of this year (Gothamist)
• Subways coming back to 24/7 schedule (Jalopnik) ... with restaurants hitting full capacity on May 19 (Eater NY)
• Sheldon Silver returns to the LES after early release from prison (NY1)
• Why Bagel Boss is expanding with locations on 14th Street and East Houston (Forbes... first on EVG)
• Amelia feeds her red-tailed offspring in Tompkins Square Park (Laura Goggin Photography)
... and thanks to Nat Esten for letting us know that the Bean's new awnings arrived yesterday on Second Avenue and Third Street... 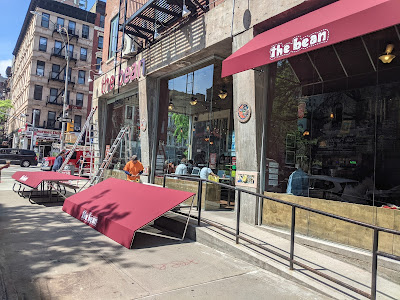 Confused about the traffic death data....?

And due to ecommerce tsunami + Covid, an explosion in delivery trucks.