Unhappy returns: A one-week respite from a sidewalk bridge 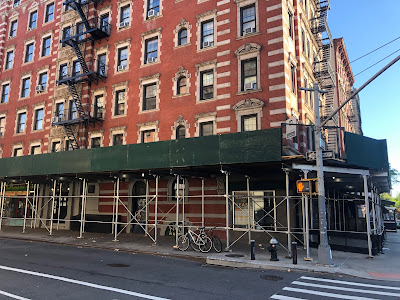 From April 21-23, workers removed the sidewalk bridge from around the northwest corner of Ninth Street and Second Avenue ... after being in place for nearly three years for façade repairs.
Well, as you can see in the top photo, the sidewalk bridge returned to 145 Second Ave. late last week, as Steven noted.
We heard two reasons for this:
a) the bridge came down before inspections took place
b) the repair work wasn't done to spec
No idea how long it will remain up this time.
But it was nice to see the Whiskers Holistic Petcare storefront while we could for the week.
Posted by Grieve at 5:06 AM

That corner turned into a total dumpster under the scaffolds.

Why is there no law to limit the amount of time for scaffolding to be up? If you can't do the job in a year, you shouldn't have put up the scaffolding in the first place.

Why is there no law to limit the amount of time for scaffolding to be up? If you can't do the job in a year, you shouldn't have put up the scaffolding in the first place.

Seriously; it's like the city is shooting itself in the foot again and again!

On the plus side, all this scaffolding is housing for the chronically homeless—whose numbers are legion.