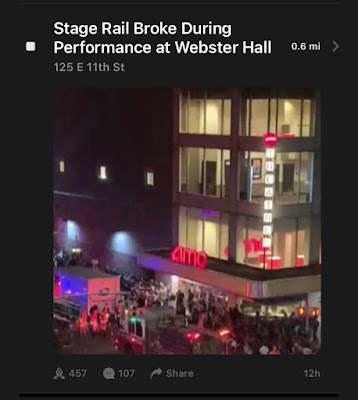 Webster Hall's return to live events this weekend didn't go as planned. (Note: These were the first shows since the pandemic closure in March 2020. The renovated facility reopened in April 2019.)

The plug was pulled during the first act of a late dubstep show last night at the venue on 11th Street between Third Avenue and Fourth Avenue.
There were several errant reports of a "stage collapse" before word circulated that a stage rail broke during Chicago-based dubstep artist Guppi's set...

Hey Webster Hall just shut down within the first 15 mins of my set. Yes I broke the rail. It’s broken

Webster Hall officials then announced that the show would not continue, and scheduled acts Calcium and the headliner, Sydney, Australia-based Marauda, making his NYC debut, never got to play.

Here's the moment those in attendance learned that the show wasn't going on...

While videos from Citizen show emergency personnel at the scene, there weren't any reports of injuries. CBS 2 pieced together a report from the Citizen clips (and they incorrectly stated that the venue is in Midtown). The NYPD was on the scene to help with crowd control.
Webster Hall has not yet released a statement about what happened.
Meanwhile, fans who made the trip are understandably pissed and are asking about refunds.

@maraudamusic @axs @WebsterHall so like are we getting refunds for last night's cancelled show? I didn't even get to go inside...

@WebsterHall any insight on what happened tonight for the @maraudamusic show tonight? feel like we all deserve a refund after this disaster

Hour and a half drive both ways, so much in tolls, paid more to park than what my ticket even cost. All that for Webster Hall to screw me and tell me to go home https://t.co/4e0KnFR4y3

I thought that place under went a major renovation to get it ready for its reopening? What did they miss something?

The renovations happened long ago,by now, and the venue was open and active already before the pandemic.

Eh, haven't missed Webster nor its "clientele" all this time. The silence and the absence of loud jerks has been delightful.

That's not your big brother's Webster, with the infamous b and t weekend crowds. It is completely owned by Bowery Presents and AEG, as a music venue, that will host late night on tour dj sets.