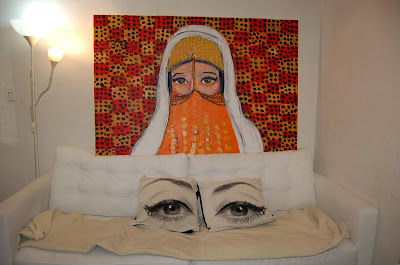 East Village resident Susan Schiffman has been photographing the apartments of rent-stabilized tenants living in the East Village for her Instagram account, I Am a Rent Stabilized Tenant. She shares some photos here for this ongoing EVG feature, which has been on hiatus of late.
Photos and text by Susan Schiffman

Tenant: Fares aka Sultana, since 1990
Why did you move to the East Village?
There is an art movement in the East Village. Especially in the late 1980s and early 1990s. And I’m gay and a drag queen. I can be myself here. No one really cares.
I went to Parsons. The East Village has a vibe. There was always a vibe, even today. Philip Glass lives here. And Quentin Crisp lived here. He didn’t let anyone see his apartment. I heard it was all papers and magazines. You could always call him and take him out to lunch. He was listed in the phonebook. You could call him and tell him I would like to take you out to the diner. Quentin Crisp with the scarf and the makeup. This is the core of the East Village.
How did you find your apartment?
It was always impossible to find an apartment in New York City. After I saw the apartment, a friend said, the most important thing is for you to have a bathtub. That is why I rented the apartment. I saw some other apartments. They were like a walk-in closet. The rent was $600 a month.
I worked at a hair salon, the Gemayel Salon. I became friends with the owner, we became like family. I met a woman at the hair salon. Her name is Elaine and her husband’s name is Arthur. She said her husband is a dentist and he owns some apartments in the East Village. There is an apartment available to rent. When Arthur’s mother came to America from Eastern Europe, she bought apartments.
I like her, she is a very nice woman. Everyone is saying get ready, they will be offering a buyout, get a lawyer. Nothing yet. Now there is a fight in the family between the two brothers.
This apartment has been renovated twice. The floor was a disaster. The problem is I’m a painter. I paint in oil and acrylic and I’m a drag queen. There isn’t enough room for paints, canvases, dresses and wigs. I’m organized in the mess. I get dressed every morning. 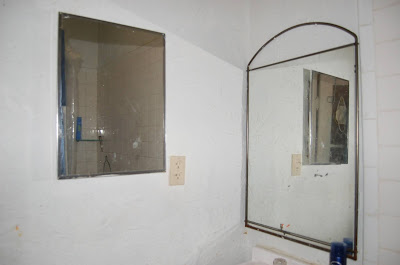 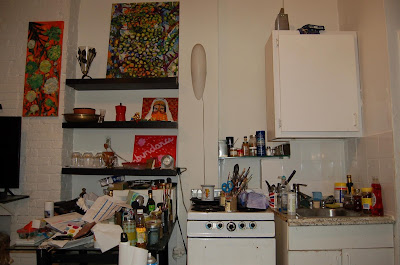 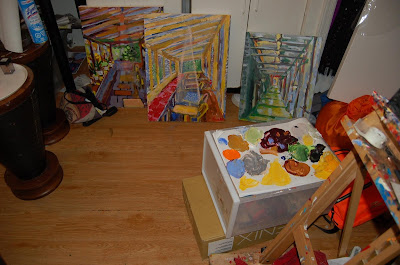 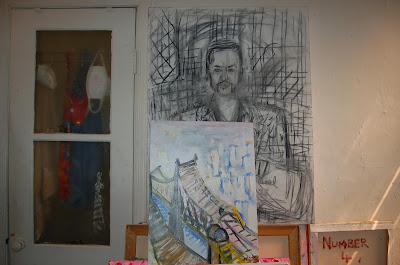 What do you love about your apartment?
I think the apartment is good luck. In this apartment, I paint these masterpieces that I will ship to Jordan. I am very scared of moving out of this apartment into something more organized. I won’t have the lovers that I had in this apartment. If the walls could talk!
And I won’t have the paintings that I have painted here. And they sell. They sell internationally. In the Middle East and in America, in Pennsylvania and North Carolina. I sold the swimming pool paintings. I am not going to tell you how many swimming pool paintings I have sold. I am not even aware. Thirty-nine. I cannot paint swimming pools anymore. Khalas! The trend is over.
I had a teacher who said, “anything you don’t like in a painting, you take it off.” I’m going to do a night scene. This might be called “The Bicycle Thief,” like the movie. 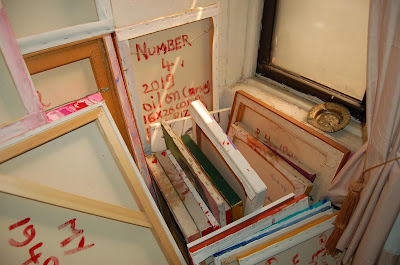 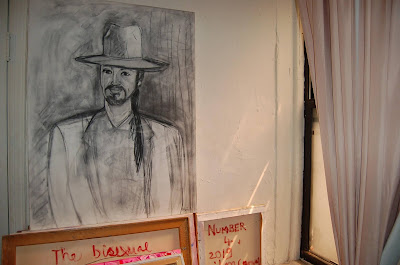 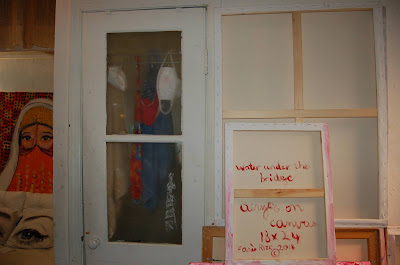 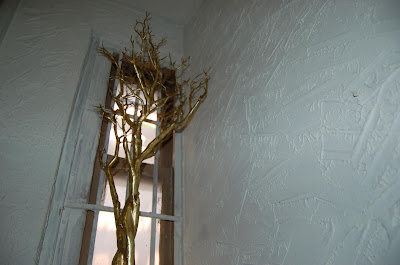 If you're interested in inviting Susan in to photograph your apartment for an upcoming post, then you may contact her via this email. And read about her in The New Yorker!
Posted by Grieve at 5:30 AM

I missed this feature!

love this series and love the beautiful paintings and twisted tree shown here! plus the double mirrors: genius! i hope fares/sultana never has to move!

Wonderful to have Susan back. It was also East Village possible to go SEE Quentin Crisp do Lady Bracknell in a converted storefront theater. Or Jeff Weiss. Or Bloolips. All gone.

Glad to see this feature back!