Wegmans makes it sign official on Astor Place, plus other thoughts on the grocer's arrival 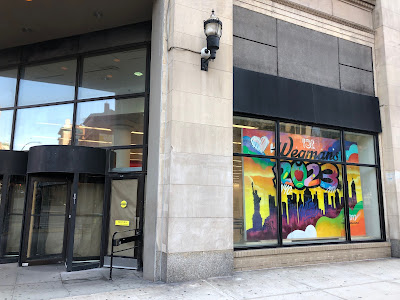 As you likely know, Wegmans Food Markets announced it was opening an outpost — the first in Manhattan for the chain — back on Thursday... taking over the two-level space from the just-closed Kmart here at 770 Broadway.
By Friday, the Wegmans signage was up... the store is expected to be operating by the second half of 2023 on Astor Place ... 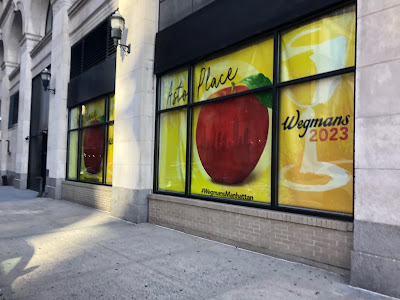 The reaction by EVG readers, via comments, emails, DMs, etc., was generally favorable. Some people appreciated the thought of a first-class grocery coming to the area, a welcome alternative to, say, Trader Joe's and Whole Foods. A few folks said they found Wegmans to be overrated and overpriced. Some people said they will miss Kmart. And a handful of commenters were turned off by the perceived celebration of a chain. (And for the record, I've never been to a Wegmans, so I don't have an opinion on their stores.)
Meanwhile, retail reporter Warren Shoulberg wrote a piece for Forbes titled "Wegmans In, Kmart Out: But It’s About So Much More Than That."
Among his observations:

• Any talk of the demise of urban living — and urban shopping — can be tossed aside with this Wegmans' move. It validates the premise that younger generations (and older ones too who don't want to move) are going to continue to choose living in a big city as opposed to the suburbs, small towns and all points in between.
Young families with kids or about to have kids will go that route — as they have for every generation since the end of World War II — but anyone thinking this was the beginning of the end of urban destinations like New York City needs to rethink that theory.

Stay tuned for more analysis about Wegmans over the next two years!
Posted by Grieve at 4:30 AM

Uh...Warren Shoulberg wrote a piece for Forbes titled "Wegmans In, Kmart Out: But It’s About So Much More Than That."

What is he actually saying ?

Too bad not an Aldi, or a Kohl's or something.

Still, at least a supermarket in that area, though wondering, it's such a huge
space, an awful lot of groceries.

Any talk of the demise of urban living — and urban shopping — can be tossed aside with this Wegmans' move. It validates the premise that younger generations (and older ones too who don't want to move) are going to continue to choose living in a big city as opposed to the suburbs, small towns and all points in between.

This is so OTT silly and nonsensical I don't even know where to begin. Obviously young people will continue to move to NYC—mainly for work—but whether that migration number is as large as previous generations very much remains to be seen. "Older people," otherwise known as NYC residents, have varied and complicated reasons for leaving the city, of which "We don't have a Wegmans!" is not one. The only thing the Wegmans move to Astor "validates" is the now-decadelong trend toward replacing cramped old-school NYC grocery stores with modern behemoths. I'm as excited for AP Wegmans as the next person, but let's not pretend that it MEANS SOMETHING about New York City's demographic future.

BTW Warren Shoulberg, the Forbes writer and author of these thoughts, resides in Decatur, Georgia.

2023? What's that about? I was not impressed by a visit to Wegmans in Brooklyn (i.e. Crooklyn) two years ago. Staying with TJs and WF.

I’m hearing a lot of complaints about the time frame for this store too open, what people aren’t grasping is the amount of refrigeration and kitchen construction that had to be done in space that previously had none!! Wegmans had their own bakery, prepared meals section, seafood and butchery!! The amount of time it takes to do this on that scale??? 2 years is pretty quick!!

In the same time frame, a single floor building is set to be demolished and a 21 story glass and steel office building will be built and ready to occupy at 360 Bowery before Wegmans opens.

@4:03pm: Yes, but the difference is that 360 Bowery is not needed for any reason, whereas Wegman's will actually provide a service to people.

PS: From what I've read of Wegman's in the last few days, they're known for their "restaurant-quality take out meals", which means that WF may not be much competition.

I'm talking about the difference in the size of the 2 projects and the time frames given to complete them. I would think Wegmans should take less time comparatively but what do I know.

Not related to Wegmans, but now that Kmart is gone, does anyone know if there's still a Coinstar in the neighborhood?