The two-story dining structure that almost was on 4th Street 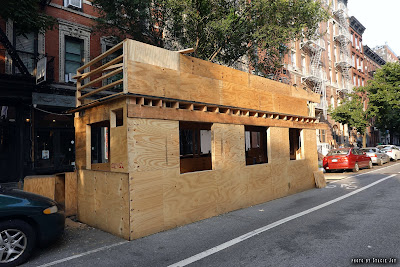 Back on Thursday, EVG contributor Stacie Joy shared these photos from Fourth Street between Avenue A and Avenue B... where workers were starting to add a second level — complete with artificial turf — to the dining structure outside Izakaya NYC... 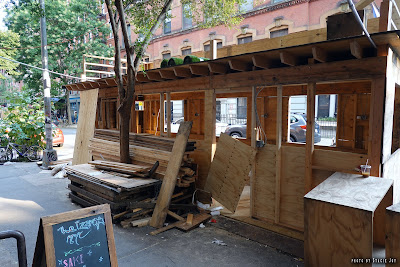 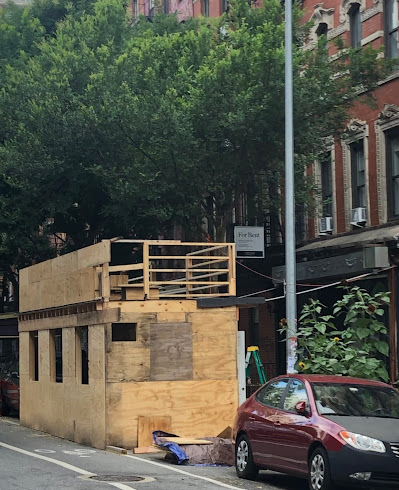 Though by the end of the day, the job's mission changed to a removal after neighbor complaints — two-story structures are not allowed — led an inspector from the Department of Transportation to the site, who nixed the double-decker.
Here's a look at the de-constructed second level and streeteatery yesterday... 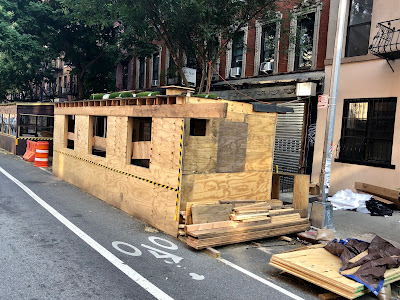 Curbed, who first reported on this Friday, received a statement from Izakaya NYC owner Yudai Kanayama:

Kanayama said he wanted to add extra outdoor space as COVID cases are rising once again, but reiterated that he was taking down the upper level. "I thought the only potential to create more seating was this," he said. The plan had been to lay fake turf upstairs and make the area more like a park or lawn than a restaurant with tables and chairs. "I was basically looking for the best we could do under the restrictions by being more creative and ambitious."

The DOT said that an inspector will return this week to confirm that Izakaya NYC removed the in-progress second deck.
The ill-fated duplex also made the cover of the Post on Saturday, in which Steve Cuozzo excoriated al fresco dining structures.
Posted by Grieve at 4:40 AM

What amases me is that they really thought they could get away with this.
Not to mention the insurance risk, that no insurance company would have ever picked up.

This is unbelievable. I am totally pro outdoor dining (and know a lot of people are adamantly opposed) but this is absurd. Owners like this and the ones that blast music all day long are going to ruin it for everyone. Much like the critics need to focus on the issue, these assholes need to stop creating issues.

The disaster is only just beginning as this political stunt by the Mayor and Gov takes on a new hazardous and quality of life depleting phase. No, not talking about Covid-19 but the Open Restaurants program.

Surprised it took this long for someone to attempt it.

You can’t even drive a truck or any car that isn’t tiny past the massive structures on Ave B. Have to cross the double yellow and the city does nothing.

LOL, I'm surprised no one tried this earlier. Shed-top DJs and beer pong is the next epic trend, bro!

To all the nay-sayers in the previous post about residents complaining about outdoor dining being permanent, this is why.

Give an inch, an they'll take a mile (or two). Shut this program down already. Why is the restaurant industry getting free public space?

Why do people who can afford cars get free public space? Because subsidizing the well off is how city politics works.

Those barriers are serving their purpose perfectly if it slows cars down and keeps drivers’ heads up.

That’s exactly the aim of the Open Streets program. To make the streets more pedestrian and bike friendly, they will become less car and truck friendly.

Those barriers are serving their function perfectly if the result is 1) fewer cars opting to take Ave B as a thru road, 2) slowing cars down, and 3) keeping drivers’ heads up.

Have you been to this restaurant? They don’t blast music. It’s actually a pretty quiet, respectful spot. Aside from the insurance risk, what grounds do you have that this would be so disruptive to the surrounding area?

You’re not wrong that others will ruin it for the rest, but point your frustrations in that direction.

Hi WILL. I believe OP is referring to the restaurant structures especially on lower Ave B

Umm... affording a car is relative, to the car and what you do and what else you spend your money on. Many people rely on vehicles which are a completely different mode of usage than a bike. Enough with the extremist activist views it’s so tiring.

This is some Cosmo Kramer type shit right here. "I'm getting rid of all my furniture and putting up levels!"

Cmon son... It’s a street, and a main avenue through the neighborhood at that. We should all want them clear and flowing, this new obsession with a street being some fantasy land is so impractical.

Yup. It’s out of control

Not a bad idea LOL. There is barely any municipal parking infrastructure in NYC.

@4:29pm: You indirectly make a point that most people are ignoring, namely: that RATS breed underneath the dining sheds, b/c the sheds are just enough off the ground (to match up to the curb).

People might want to think about that when they extoll the pleasures and Europe-ification of NYC via outdoor dining sheds. And when they're eating there, and the rats are breeding underneath them.

Will, do you not see the problem with 2nd floor residents having diners staring into their windows all day from mere feet away? Do you think any 2-story street shack will be built according to fire and ADA codes? This restaurant owner was blatantly trying to get away with this shit. Shame on him.

This is basically a building structure. And it needs to be built to code. Otherwise the whole upper level could come crashing down.

The really smart restauranteurs built their outdoor sheds on the sidewalk attached to the restaurant. These sheds look very similiar to sidewalk cafes. Once something is up, it is hard to take it down, unless the city inspectors can declare them unstable. The whole point was to make them "airy" and open, however some all closed off little rooms. How are these better, safer, then eating inside?