Ken Mac at Greenwich Village Daily Photo first reported on Thursday that Bleecker Bob's would be replaced by a Starbuck's... (Jeremiah followed up on it, and received a lot of comments...)

An EV Grieve reader points us to the Bleecker Bob's Facebook page, where they posted the following yesterday afternoon...

So, they are not closing — just moving. Store spokesperson J.K. Kiptzer, partner of owner Bob Plotnick, told WNYC yesterday that they hope "to find something a little more affordable in the next few months on the Lower East Side." Read more about this possibility at Jeremiah's this morning...

So. Let's help them out. Here's one idea: Avenue A at Fifth Street ... former home of East Village Pharmacy, who moved down the Avenue... 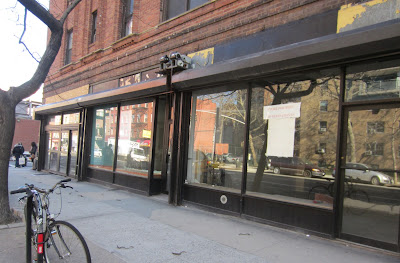 Anyone? There is plenty of space available around here...

We just heard from Ski, assistant manager at Bleecker Bob's.

"The spaces we've checked out so far in the east village are 650-800 square feet at a cost of about $4000 a month. Something like that would be doable."

EV Grieve Realty. I like it. Who knows the 'hood better? Not many.

Thanks. I'm going to need a deposit on your comment...

plenty of space on 2nd avenue between 3 st and 6th st. lots of vacancies

What about 34 Avenue aka the old Aces & Eights-Mo Pitkins space? Too big?

No liquor license but would the cranky neighbors still bitch?

Theres a ton of vacancies on 14th Street between A and B, a former Jewelry Store, the old 99 cent store...

I nominate the old Octavia space on Avenue B!

The old hardware store space on 3rd ave between 11 and 12 has been empty for 3-4 years.

I’d love it if Bleecker Bob’s moved to the old Vampire Freaks or Furry Land spaces on Ave A either side of 12th. There are already two record stores right there on 12th (Academy b/t 1st and A; Big City b/t A and B). We could make it a “record row,” like the thrift-store stretch on east 23rd, or the back-in-the-day bookseller row of upper 4th Ave.

I like that old pharmacy spot. MOstly because it's right next to me :)