The southeast corner of Avenue C and East Third Street (aka 32 Avenue C) has been on my endangered list for some time... in March, when I took the photos below, the sidewalk bridge arrived along with a scary DOB message: "THE FACADE OF THE BUILDING IS CAVING IN; COMMERCIAL BUILDING; BUILDING NEEDS TO BE VACATED" 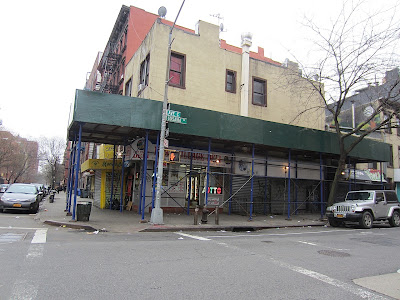 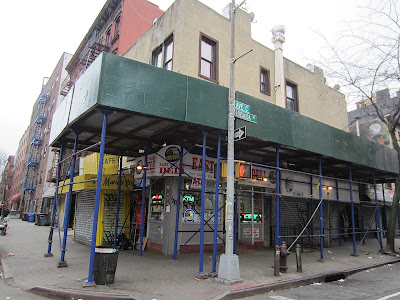 Yesterday, the city hit the building with a full vacate order... EVG reader Bobby L., and a neighbor of No. 32, said that the city made everyone here leave ("thrown out" was his term) yesterday morning at 10... a group that included the upstairs tenants, the East Village Deli and the Perfection Barber Shop... 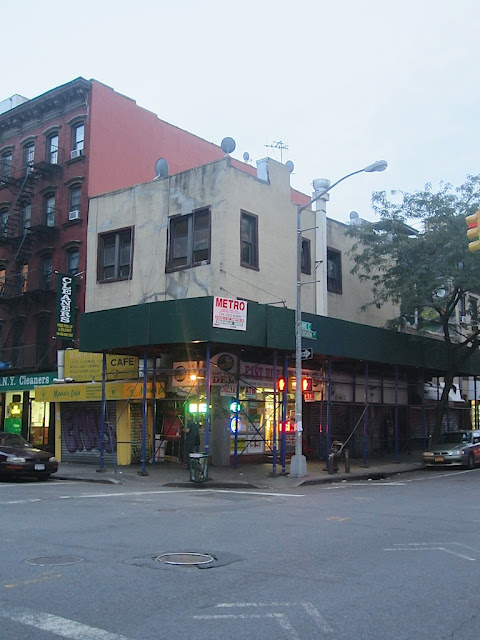 ... among other things, this vacate order means the closure of Maria's, the tiny streetside stand with delicious, inexpensive food and homemade signs... 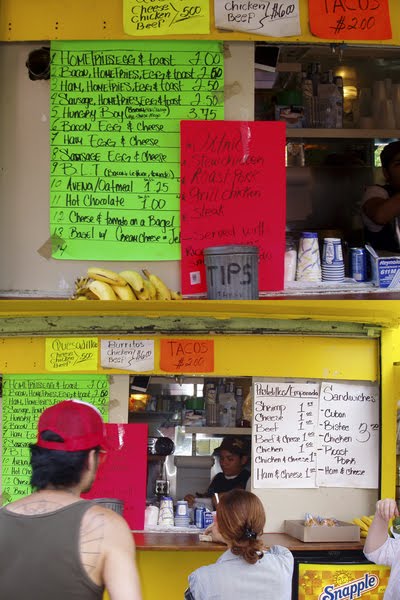 A neighborhood place for neighborhood people not interested in standing in line for heritage pork and craft beer at buzzy places ... 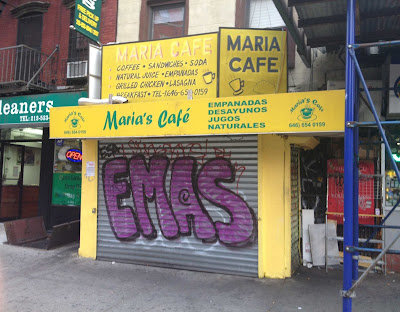 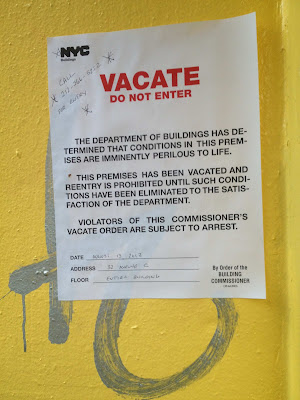 I'd be surprised to think that the landlord (listed at the DOB as "Fairfax Management Corp.") would pay for any extensive repairs here ... the land is far too valuable to allow for neighborhood places like this to exist... Still, no official word from the city, just, as the sign says, "reentry is prohibited until such conditions have been eliminated to the satisfaction of the department." 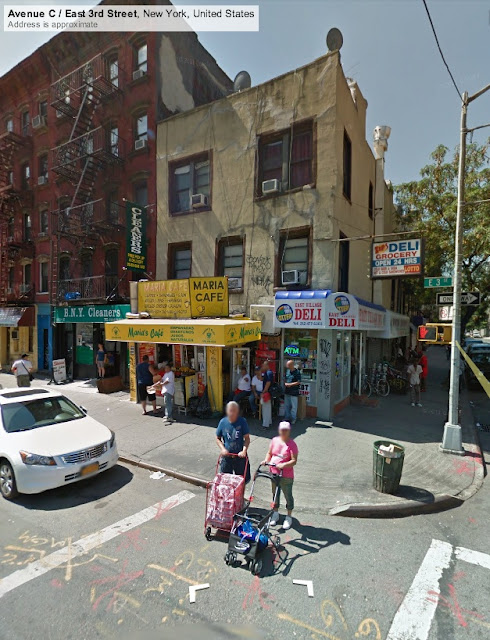 Thanks to EVG reader Andrew for passing along the tip that the city had issued the vacate orders...
Posted by Grieve at 6:59 AM

The beginning of the end for Ave C...

I hope the businesses can relocate. I miss Maria's.
Melanie

The one time I actually think the sign SHOULD be printed in Spanish as well as English, and of course it is not.

I always wanted to try Marias, just kept forgetting about it... It was good? bummer...

it was great...2 eggs and cheese on a perfectly toasted roll and a morir sunriendo for nada....
i have a strange unfounded hope in this corner - in the whole stretch of C from 3rd to houston, for that matter - it's old school, real deal, and i love it.
4th & C resident

Oh crap!!! This is terrible news! Maria's is so good and the women who work there are absolutely lovely. The people who lived in the buildings are not wealthy either--where did they go? This confirms my suspicions that lower Ave. C may be next in line for gentrification (see fancy tapas restaurant opening next to Casa Adela...)

It looks like the landlord just did a crap job of cheap concrete over maybe an old brick or even wood frame building, now it's falling off in pieces. Anyone contact the owners to find out more info? Makes me wonder what is up that they let it go like that.

Folks, this building is FALLING DOWN. I walked buy it the other day and thought: This building is going to fall down. I'm glad someone did something about it. Yes, it's sad to lose a local business, but this is hardly the city's fault.

I love Maria's, I will be very depressed

This is so sad, I live on 2nd and C. My prayers are with this who are out of work right now.

An update - the scaffold is still up around this corner and nothing has been done with the building. Worse still, the whole area under the scaffold has become a 24/7 meeting place for the local bums and misfits, who hang out there at all hours of the day and night - drinking, screaming, shouting, singing, bickering and fighting. They have become a serious quality of life issue on the block and police are called to the location sometimes 4 or 5 times per day. One of the women openly urinates and defecates on the corner and walks around with her genitals exposed. Local tenants have had enough and we are going to speak to the community board and the dept. of buildings and see if we can get something done to remove the bums and the scaffold.

Any news on what is happening on this corner? It has been in the same state for years now.