Is a member of the NYPD listing his apartment on Airbnb?

One new listing the tenants discovered is of particular interest because the Airbnb host says that he is a police officer. 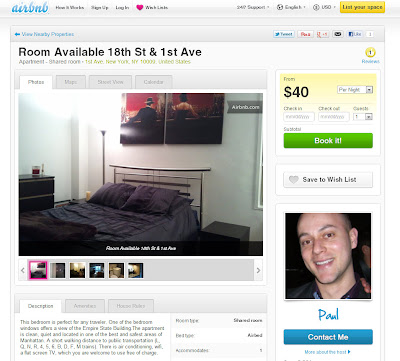 "I’m a Police Officer from New York who secretly takes singing and dancing lessons. And I make a mean peanut butter and jelly sandwich. I'm Greek and yes I do put Windex on everything."

One of several accompanying photos on Paul's Airbnb profile page shows him in uniform, posing with a civilian in front of an NYPD police cruiser. 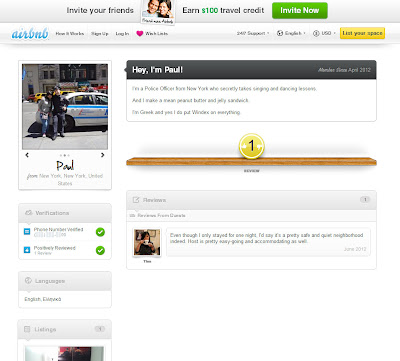 Stuy Town's spokesperson, Joe DePlasco, recently told the Times that Stuy Town is actively pursuing the tenants listing their apartments as short-term rentals on Airbnb. He says nearly 50 cease-and-desist letters have been sent to residents since the middle of last year, 15 of which have moved out.

(For most residential buildings, a 2011 law prohibits rentals of fewer than 30 days. Although those who microsublet for fewer than 30 consecutive days and remain present in the unit along with their guests — and those who don't accept money from renters while away on vacation — are exempt, according to city officials, as the Post recently pointed out.)

If it is in fact true a member of the NYPD is listing his apartment as a short-term rental, this will only fuel the Airbnb controversy. We'll no doubt be hearing more about this.
Posted by Grieve at 6:40 AM

NYC is getting close to achieving the Carl Farbman lifestyle.

Is this air bnb thing and others like it illegal if the person owns their apartment? I'm not sure what the laws are.

Yes, its still illegal in some cases even if you own the apartment. Even when its not illegal, many co-op/condo boards have rules against it.

Short-term rental laws aside, this NYPD officer is violating his Stuy Town lease by using his apartment as a hotel. If he's violating his lease and possibly exposing his neighbors to bed bugs and granting strangers access to otherwise secure buildings, it doesn't say much for his character.

It's pretty clear Bloomberg is doing zilch about this problem. He wants NYC to be the next tech city, and dealing with Airbnb conflicts with his agenda.

"He wants NYC to be the next tech city, and dealing with Airbnb conflicts with his agenda."

Why do we bother with Sty Town ? since when are they part of the East Village ?

I'm glad Evgrieve does bother with Stuy Town. I've lived there all my life and I spent most of my youth in the East Vill supporting it stores, bars, and clubs. I care very much as a Stuytowner what happens in the EV.

For me, it has been and will always be the Gas House District.
But that don't sell to the NYU/Bro/OMG/Like-Yah crowd.

I'm glad Grieve is covering Stuy Town as well. We need people to know what a living hell it is in some of our buildings. The apartments are being carved up with fake walls so they can be packed with college kids and transients. Sometimes as many as five unrelated people in an apartment with one bathroom. They urinate and dedicate in the stairwells, leave garbage and recycling in the lobbies and require the constant presence of our security officers. We have bed bug infestations in several buildings and this illegal hotel problem. Meanwhile they spend all of their money on marketing and advertising, tropical rain forrest plantings, and events few people show up for. SOS! We need help!

Did you know that StyTown little league refuses to play with any league from below 14th Street ? They consider themselves as Upper East Side league and besides using fields from the East River, will not touch a baseball from the EV.
If you ask most Stytowners, they do not consider themselves from the EV but rather ( hold laughters) form Kips Bay or even Gramercy Park.
In fact, they re just their own neighborhood:

I also support EVG covering the occasional Stuy town story. The fates of EV and ST are linked whether you like it or not. So many of these new generation of woo-woo'ers, they are shacked up in ST.

Crazy Eddie you gotta be kidding me, I understand trying to one-up ppl on the internet but gas house district? Please. Unless you are a septuagenarian or older then you are full of it.

@Anony 12:12 PM-For a hood name to be cool, one does not have to have lived during it’s time. Case in point Washington’s Irving’s “A History of New York” with the infamous Diedrich Knickerbocker (gee, that name sounds familiar) and his “Salmagundi” papers ( Gotham, anyone?). By the way, go visit his house at Sunnyside which I have done. I love NY history, that why I have read Gotham-a History of NYC to 1898,, The Power Broker, The Gangs of New York, etc. Growing up in Stuyvesant Town, I knew about the Gas House District, Murphy Park, etc., way before the internet, my friend. There was a thing called “books”.

I thought the name "Gas House District" was fairly well known. Ephemeral NY did a nice post on it a while back:

3000 families displaced in 1945. It would be interesting to find and talk to some of those people.

There are probably more than enough contrived neighborhood names in the city as it is, without reaching back into some kind of romanticised "Gangs of New York" nonsense. This is all a real-estate talk anyway. In 1967 I was born in the Lower East Side (11th and B), which somehow moved south of Houston when there was money to be made. Some names make sense (hard to argue with Chinatown or Washington Heights), but once Nolita and Dumbo came along I pretty much stopped paying attention. It's awfully damn precious these days...