Per a reader early Saturday morning regarding Solas, the bar-lounge on East Ninth Street between Second Avenue and Third Avenue...

"I heard some screaming coming from the street but I ignored it at first. It's utter chaos outside Solas on the weekends.

But the screaming got louder and more hysterical so I looked out the window and saw EMTs lifting some chick onto a stretcher. They took her away in an ambluance. This all took place around 1:40 AM" 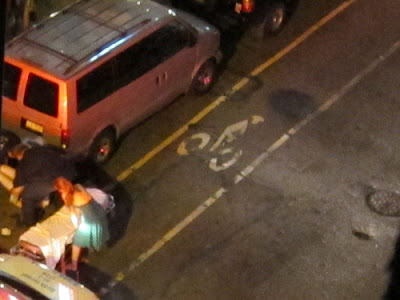 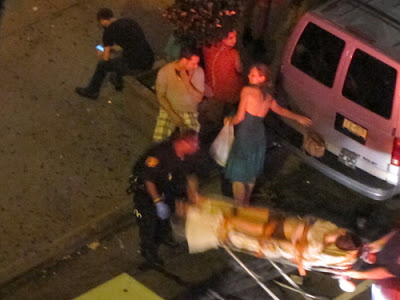 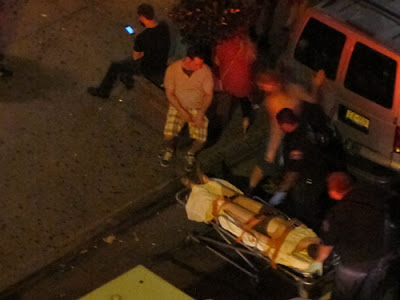 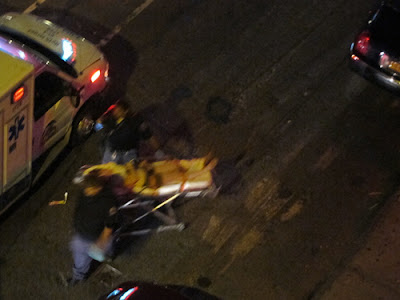 The reader wasn't sure what transpired... though noted it didn't seem to bother many of the other Solas-goers... 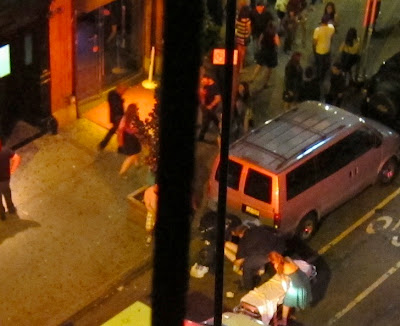 We're not too familiar with Solas... So we took a look at what Yelp users thought. The latest review, 5 stars, is from a Queens resident who noted: "When I feel like dancing my face off and drinking like a fish, I come to Solas! Yes it gets really packed in the dance area and making your way over to the bar past the crowd is difficult but you get the club experience without having to pay cover or ridiculous $$$ for drinks. It's a win-win!"
Posted by Grieve at 6:29 AM

Email ThisBlogThis!Share to TwitterShare to FacebookShare to Pinterest
Labels: Solas

As she was wheeled away, the woman was heard to faintly whisper "woo."

From Yelp as well:

Cons:
1. gets pretty crowded
2. smells like a mixture of BO and a frat house
3. many drunk chicks ( i suppose if you're a dude this could be a good thing)

With the NYU expansion approved (current enrollment-50,000), you ain't see nothing yet. EMS-a growth industry.

Notice the ad for Stuyvesant Town as well in this NYDN story. Nice demo placement.

Solas is a F****** NIGHTMARE on the weekends. From Midnight to 2Am they BLARE their sound system, sometimes with the doors wide open causing the neighboring buildings to vibrate.

Their patrons block the sidewalks, loiter and scream outside for no real reason other than to act like idiots. The doorman yells his usual line at them about not blocking the sidewalk and to move along on but they all take five steps to the right and continue the chaos.

Around 3:30AM, rather than turn the houselights up to get their patrons to move along they play the same Rihanna songs, over, and over, and over again, with the door wide open.

And what would make the night complete without these drunken idiots pouring into the street, hailing cabs, switching cabs, causing a traffic jam, and incurring the wrath of the other drivers on the street who start blaring their horns.

It's a miracle more people aren't carried away on stretchers. Solas is a nuisance on an otherwise charming side street.

The guy with his back to her while texting! Classic!

Girl in Green Dress: When she tossed back her 15th Jägerbomb I asked 'Are you alright?' and then she face planted. So RUDE! I was TALKING to her!

EMT: Then what happened?

Girl in Green Dress: I stepped over her and went outside to text 311. It took for EVER for you guys to get here.

Girl in Green Dress: Have you seen my flip flop?

Guy Texting: EPIC NIGHT IN THE EAST VILLAGE. THIS PLACE IS CRAZY. WOOT!

I live on this block as well and they make the weekends MISERABLE for us.

Between Solace and The 13th Step, it's like tornado alley.

Tonight Solas has their front doors wide open and was blaring the sound system so loud, my neighboring building was vibrating.

I call 311, report it, and within 5 minutes the club was DEAD quiet. As if the club was closed. This is the second time I've called 311 and Solas turned the music all the way down within a few minutes.

I'm glad the noise has stopped, don't get me wrong, but when the cops show up and it's silent, I don't want them to think I am lodging false complaints.

Are they being tipped off? Has anyone else had a similar experience with a 311 noise complaint?

Were all making jokes because the scene is funny but it has to stop..the vomit, the noise! How do the cops let them get away with it? Do they "eat" there for free? It's disgusting that 9th Precinct is so corrupt. We all know why and how it remains to be noisy...the cops are CLEARLY in the photos so they know what's up.

I think this singling out of Solas is ridiculous. What about the other bars in the neighbourhood that make up this drunken East village crowd like the 13th step etc. I frequent Solas quite a bit, usually on weekdays but I have been there on weekends also, I have yet to have a bad experience there. I understand that the volume of drunk people roaming the East Village on weekends is alarming but I don't think it's fair to point the finger at one establishment.