You know those beautiful homes at 123-125 E. 10th St. between Second Avenue and Third Avenues, the single-family Anglo-Italianate townhouses? These. 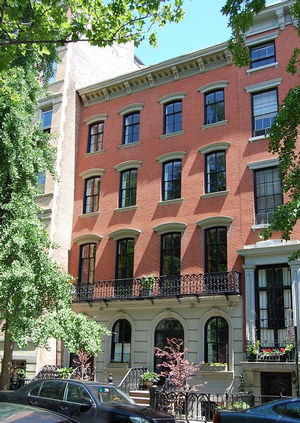 After nearly four years on the market, Crain's reported in June that an unnamed buyer picked up the five-story, 4,200-square-foot home at No. 123 close to its asking price of $6.25 million. (No. 125 remains on the market.)

Today, Page Six reveals who bought the house: Olivier Sarkozy, who is the half-brother of the former French president as well as the beau of Olsen twin Mary-Kate.

Per Page Six, he "plans to share the palatial 146-year-old love nest with Olsen, sources said. Sarkozy is buying it because he and Olsen “like that it is old,” a real estate insider told The Post’s Jennifer Gould Keil. The 4,200-square-foot home, built the year Abraham Lincoln took office, was designed by architect James Renwick Jr., best-known for St. Patrick’s Cathedral and the Smithsonian."

"The sale has brokers wondering if Mary-Kate’s sister Ashley will snap up the house’s twin."

Anyway, here's a look inside the place from a previous post. Meanwhile, we have some Photoshopping to do...
Posted by Grieve at 6:59 AM

Wasn't one of the twins already spotted there?

Sorry! All credit to you--It's a classic bit!

I think you mean "klassic."

Maybe the Olsen twins can go rip David Schwimmer a new one for destroying that lovely townhouse he bought. And boo to Barden Prisant for selling out (in more ways than one) to him in the first place.