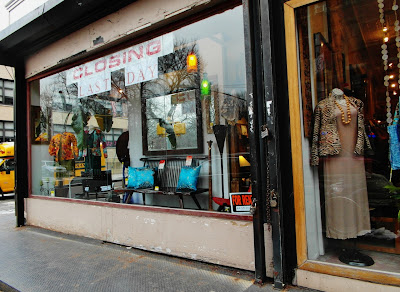 As first noted back in November, Amaran is closing on Avenue B... the store that specializes in imported home goods at East Seventh Street originally said that they would close on Jan 27 ... now Bill the libertarian anarchist passes along word that tonight is the store's last night... 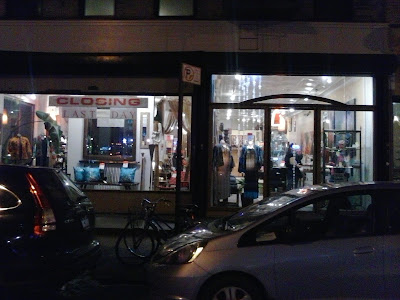 [Bill the libertarian anarchist]
Posted by Grieve at 6:15 PM

Email ThisBlogThis!Share to TwitterShare to FacebookShare to Pinterest
Labels: Amaran

With fingers crossed and baited breath, I shudder to think of what will take it's place.
One day i hope to achieve my offbeat EV t-shirt store pipedream in a space like this... I got a whole drawful of designs!
Such as
"WHAT THE HEY"

This was one of the first places I remember stumbling upon during a bike ride (back when I lived on 9th and 1st) past Avenue A, where I was taken aback... "Whoa! What's the fancy here!?" This and La Gould Finch on 6th and B (the hookah bar now). It was a jolt of fancy east of Av A.

This space is pretty, pretty huge. I hope the divide it up, actually.

I am curious what will happen to this prime space. Did you notice the "for rent" sign? One of those kinds that you buy at the hardware store... so the landlord likely hasn't reached out (yet) to some investment property brokerage service.

I forgot what my point was.

I always liked this place but couldn't afford anything til they were closing. We picked up some cool stuff on sale at xmas time. The owner said they'll open up again close by, but they won't sell furniture.