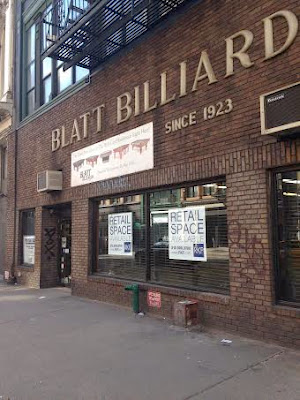 Retail for lease signs are now up at the former home of Blatt Billiards at 809 Broadway between East 11th Street and East 12th Street... the pool table manufacturer left its home of 90 years at the beginning of 2014. (The manufacturing portion of the building moved to New Jersey; there's a new showroom on West 38th Street.)

The 126-year-old loft building is getting a big glassy addition. But more on that in a sec. As for the retail component of the new structure, there isn't much info per RKF. A few details: 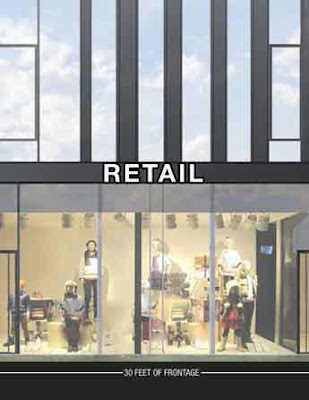 No. 809 sold for $24 million last May. The new owners have big plans here, as The Real Deal reported, by boosting the height of the 55-foot building to 199 feet — adding 10 stories to the five-story structure.

Here is a shot of the building last week, pre-retail-for-lease signs ... 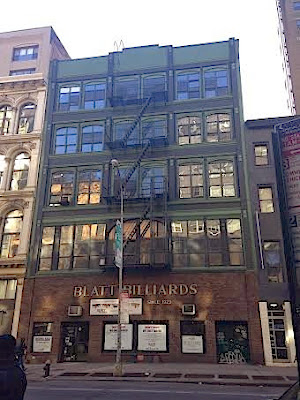 And here are the latest renderings via Curbed on March 14 ... Brace! 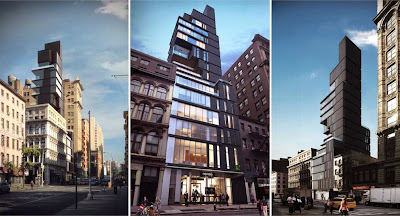 Per Curbed: "The new building will host offices on floors two through eight and just three condos — a full-floor unit, a duplex, and a triplex — on the top floors."

Will the units feature pool tables from Blatt?

Previously.
Posted by Grieve at 5:20 AM

Fuck all this glass. Wait until the next hurricane hits, or a couple of earthquakes. You think NYC doesn't get 'em? They do...they've just most been small. But, for new buildings, we've got to design to a seismic code that was pretty recently added. Dunno about renovations like this.

It's all so dated and cheap looking.

ugh, that's such a great looking building; why mess with it?!?

It's located in the Heart of the NYU campus?

So rather than supply housing for regular or even moderately wealthy people (earning only in the low six figures) they are going straight for the Russian / Saudi oligarch / druglord / warlord demographic.

Same as the similar looking glass building across from the dog park on Broadway and 15th which never has anyone inhabiting it because it was all sold as 7th and 8th homes to the global superrich.

I think this will be housing for NYU students of Russian billionaires.

Who remembers Broadway Charlie's, a dive bar if there ever was one, right next door? It was something out of Eugene O'Neil's The Iceman Cometh, good thing I never will see the new New York, you can keep it!

I guess it's a good time to be a glass manufacturer. Sigh.

And why must these new buildings keep using the most depressing shade of grey?

Simply said ' awful'. Tasteless and no respect for the area!

The only thing missing is a Chipotle on the ground floor and a pneumatic tube system in order to shoot organic locally-sourced non-GMO gluten-free burritos up to any office worker or condo owner who has the munchies. A slide and huge walls that open like garage doors would be nice too.

Hey, Leo didn't sign up for this when he bought his new condo around the corner on 11th. I don't think he's gonna enjoy looking at this monstrosity...and mid-block too!

Obviously the architects did everything within their powers to design a building that blends in with neighborhood landmarks like The Strand. In fact they could not have done a better job being sensitive to their surroundings had they painted the Empire State Building fuscia. Nice job architects!