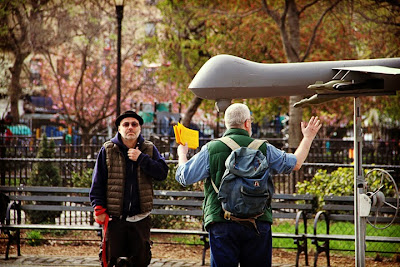 Felton Davis reports that the MQ-9 Reaper was a big hit in Tompkins Square yesterday, and will be "landing" again today at noon. 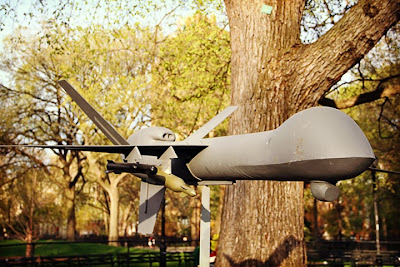 There were also leaflets titled "Stop the Madness of Drone Warfare," which include a survivor's account of a drone attack on a wedding party in Yemen last December.

Felton also notes that the Hellfire missiles were pointed AWAY from the church of Saint Brigid-Saint Emeric.

Photos by Shane Knight
Posted by Grieve at 11:27 AM

Drones are so wrong. They allow people to kill like cowards and desensitize the act of killing itself by making it like a video game.

Drones are useless against G.O.R.T.

Now this would be useful if the drones would drop stink bombs or tear gas on the SantaConners, pub crawlers, brunchers, and WOOOOOOOers.

"Drones are so wrong"- you must not know anyone in the Navy or Air Force. you'd sing a different tune.