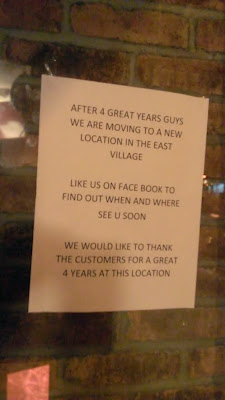 EVG reader MP spotted this sign last night at South Brooklyn Pizza … apparently the pizzeria, with four locations in Brooklyn, is closing here at the end of this week … and moving to an undisclosed new space.

There isn't any mention yet on South Brooklyn's Facebook page about this new East Village location. (An employee told MP that they were still looking for space.)

Shortly after opening at 122 First Ave. between East Seventh Street and East Eighth Street in April 2010, South Brooklyn Pizza began expanding into the space next door formerly occupied by Ruben's Empanadas. There was a legal battle over this move, which Jeremiah Moss covered here. (It was never easy for South Brooklyn. There was also opposition to the pizzeria's liquor license. And what became of those "Fondle Parties"?)

In any event, this will be a lonely stretch of First Avenue … next-door neighbor Kim's is also closing in the months ahead. 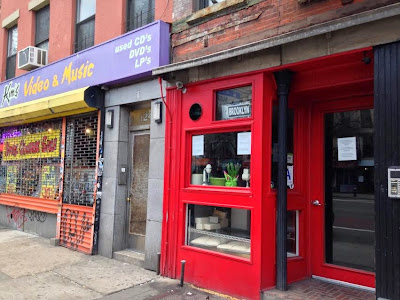 Previously on EV Grieve:
Opposition to South Brooklyn Pizza's liquor license
Posted by Grieve at 5:19 AM

I went there when it first opened and thought that it was very good if pricey at $4. a slice. It may have had a visibility problem situated in the middle of the block below the east-west foot traffic on St Marks Place (8th St,). Also they seemed to never get any press like other pizza places.

That is probably my favorite pizza in New York. Worth every penny.

I just saw this morning that Kim's is closing. Gutted.

I forgot that they were closed so I went in for a special square (like I always do) and I bumped into the landlord of the building who said they got evicted today.
She said they hadn't paid rent in years.
That's all I know. Just reporting what she said.

Asking questions are in fact pleasant thing if you are not understanding
something completely, but this piece of writing presents nice understanding yet.