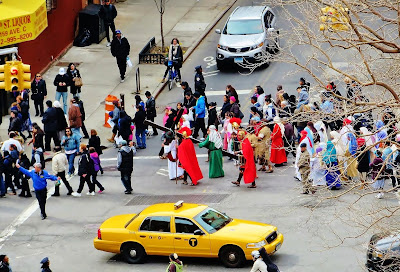 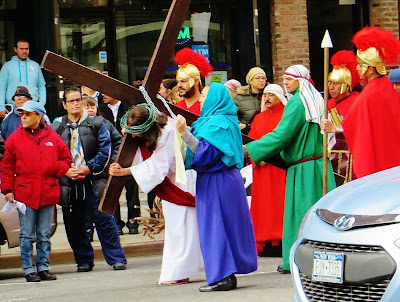 Photos by Bobby Williams
Posted by Grieve at 9:20 PM

Please. I am an Atheist who is respectful of others and their beliefs, But why are those of us who aren't believers subjected to this absurd display and glorification of something didn't happen? Are people that incredulous to accept that all of us believe in Christ? Why create a spectacle on a public street as some theatrical event so that all of will bow down and worship a man who was just a man and nothing else. I need to move from this neighborhood and move to a secular society, perhaps in Denmark or Sweden, where this crap is kept behind closed doors, in what many call a house of worship. Every year, it get more annoying and silly. I am so over this area of zealots.

I think this is a Filipino tradition and while you claim to be "respectful of others and their beliefs," the rest of your rant indicates otherwise. (I am agnostic with regards to religions, btw).

I am an atheist as well and I have to say the first person to comment only represents intolerance and a narrow view of the world. I have watched this good friday procession for many years, it use to come by my home. I enjoyed the pageantry regardless of the religious symbolism as well as the singing and music. This event does not use tax dollars, there is no soliciting or attempts by the organizers or participants to "convert" anyone. With gentrification our neighborhood will void of diversity and self expression soon enough and displays as this one will only witnessed in the out boroughs. I suggest anyone so intolerant should move to bland-land asap or sit tight and bland-land will be upon us in a few short years.

Say atheist, you sure are awfully sure of yourself. And so "respectful of others and their beliefs"! Just a beautiful thing to see, congrats.

It was said by a cleverer man than myself, "the best argument against atheism is atheists".

Another heathen atheist here. Roman soldiers, guy carrying a big heavy cross and lots more to see and here.... what's not to like? Seriously. I don't participate in any religion myself, and it doesn't bother me that other people do. Whatever gets you through the day.

I think others are taking the first comment to heart. Perhaps he or she seems angry? So be it. We do seem to reside in a world steeped with religion; it is impinged on us everyday. Someone asked me am I going to church for Easter. I said, "No." They replied,"This is a day of Christ's resurrection. What's wrong with you?" I don't feel the need to defend my lack of beliefs to them or to anyone. I happen to see the demonstration outside. Yes, it doesn't hurt anyone and it is free country. However, it makes you wonder why people believe in something when there isn't tangible proof to support it. My only question is why do they feel the need to parade on the street and dramatize the act? It is entertaining and a bit strange. I just don't understand the purpose behind it? What is the intention? What do they expect people to do? Cry? Scream with rage? Thank JC for their saving them from their sins? Pray with them? Dance on the street? Mourn? I just find the whole religion think baffling. But, like the last commenter, whatever floats your boat. Peace.

The best argument against atheism is the universe itself. Explain that, Mr. Atheist. And have a Happy Easter!

This is about tolerance, not getting your nickers in a twist because someone brings their religious beliefs to the street one day each year. There are many parades in NYC every year where many ethnicities celebrate their presence and contributions to our great city. Nobody seems to give a shit if the Hari Krishna people sing in our parks and dress in fruity pastels clothes. The Mitsvah Tank blast concert level music from RVs at least a couple of times per year, when the light turns green they move on up the avenue and peace and quite is restored. I am a non-believer and only tell people this when they try to pitch their beliefs on me. Normally I could care less what they believe in as long as religious laws are not incorporated into our civic laws who cares.

Ah, the good old EV ... I seeing remember an Easter parade through Tompkins Square Park many years ago.

Best part of it was a wasted punk waking up on a park bench and looking at the parade of people in Roman costumes as if he was wondering if what he was seeing was a drug or alcohol-induced hallucination... good times.

Jesus was not the messiah. No one was. He was a mere man. i'll believe in Easter Bunny or Winnie The Pooh before I believe in him.

And toward the last response to the last commenter, who the hell knows how the universe was created 4.5 billion years ago. I don't think God, Jesus Christ, and the Holy Spirit had anything to do with it.

Some things are just unexplainable. Get a grip people.

Who the "hell" knows how the universe was created, you ask? It's funny how atheists always use words like "hell" when they don't believe it even exists. I'll tell you who the hell knows how the universe was created: God knows, and he sure as hell isn't going to tell you. I doubt most insects or fish know that humans exist, much less the Internet, yet here we are, a bunch of humans using the Internet. Just because you can't figure out that something does exist does not mean that it does not. Now go have a Happy Easter, or Happy Hell Day, or whatever you enjoy, because the rest of us are going to enjoy a great sunny Easter Day, crucifix and all.

Giovanni: You sound very adamant about the existence of God and Christ. Do you have his email address? I'd like to ask a few questions. Take a chill pill man. Get some therapy. Think logically, not based out of a fantasy that some man is going to rise from the sky and grant us eternal life. The only person you should count on is yourself, not some mythical figure. Breathe. It's just Easter. It's like any other day. Not everyone is a Christian nor do they symbolize pieces of wood.

2,000 plus goddamn years later and we're still talking about this guy…..Jeeeeez

Can we talk about Ash Wednesday? I forget people still rub cremains on their face and walk down the street. I thought it was a Walking Dead publicity stunt. Zombies everywhere! The cell phone slow walk made it even worse.

It's the universe that actually disproves god.

If the universe were only 6,500 years old, how could we see the light from anything more distant than the Crab Nebula? There wouldn't have been enough time for the light to get to Earth from anywhere farther away than 6,500 light years in any direction. That's just enough time for light to travel a tiny portion of our Milky Way galaxy.

"who the hell knows how the universe was created 4.5 billion years ago"

We hav every good theories and data showing the universe came into existance 13.7 Billion Years ago. .you are thinking of our solar system and Earth at 4.5bya. We still have some issues describing what happened right at the moment of the "big bang" that created our universe.. but we have a pretty good timeline from that point on.

The Earth was formed by a well understood natural process.

"If the universe were only 6,500 years old, how could we see the light from anything more distant than the Crab Nebula? There wouldn't have been enough time for the light to get to Earth from anywhere farther away than 6,500 light years in any direction. "

The FSM, in his/her wisdom, manipulates your measuments with his noodly appendages. you can't know if the world was created 13.7 bya, 6,000ya or on a Tuesday in March in 1997.