Twist-ing the night away, though it's no longer self-serve 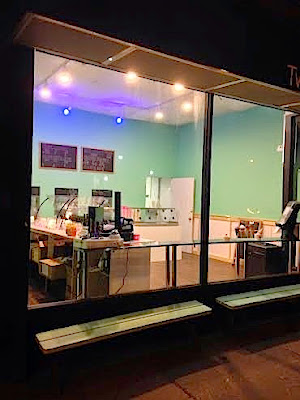 Several readers pointed out that Twist was open for business this past weekend on Avenue A… Some folks put the place up for dead, as the fro-yo shop between East Fifth Street and East Fourth Street had not been open much during the past 3-4 months…

But! It is open… with a new look … and the the place is no longer self-serve. Someone will serve it for you. (Gelato is also on the menu.)

Meanwhile, unlike Twist, Twister on Second Avenue is officially closed.
Posted by Grieve at 4:50 AM

Email ThisBlogThis!Share to TwitterShare to FacebookShare to Pinterest
Labels: EVG is not even trying with headlines like this, Twist

Someone please explain this place to me! It just makes no sense, with its complete lack of design elements and its never (okay, now rarely) open hours. I still maintain that it's some sort of front or money-laundering scheme.

Like I said before, Twist is not dead because it was never alive....

It is not open 24 hours… just a dumb headline.