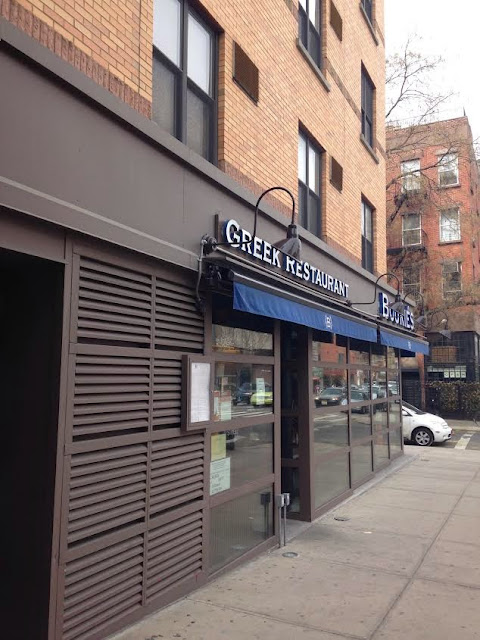 The Boukiés space on Second Avenue at East Second Street won't be empty for too long.

The Times reported last week that Vicki Freeman, Marc Meyer and Chris Paraskevaides, who own Cookshop, Hundred Acres and Five Points, will convert the corner space into a Mexican restaurant.

The Greek-themed Boukiés closed in March after a two-year run. In April 2013, owner Christos Valtzoglos sued the State Liquor Authority over an "illegal agreement" with Community Board 3. Boukiés only had a beer-wine license. Perhaps the new owners will somehow be able to secure a full liquor license.

Speaking of Mexican food, the Black Ant is getting ready to open just one block away… on the east side of Second Avenue north of Third Street… 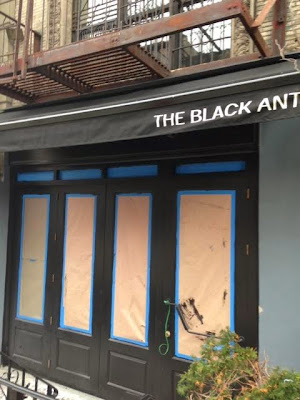 The owners of Ofrenda in the West Village are behind Black Ant, which is billing itself this way: "Innovative Mexican cuisine & cocktail bar."

Team behind Ofrenda bringing Black Ant to the East Village

Email ThisBlogThis!Share to TwitterShare to FacebookShare to Pinterest
Labels: Boukiés

Just what the East Village needs - more tacos and over priced cocktails!! How original. It's either a genius move to pander to the cookie cutter people invading the EV, with a cookie cutter restaurant concept, or these folks are just fucking morons.

At what point does the math stop working for people with the intention of opening a new restaurant? Commercial rents keep soaring, it becomes impossible to to standout amongst a sea of new restaurants all fighting for the same customer. I guess more than ever only the strong will survive in the eatery world.

I'm ok with it. They have good places. Yeah, but not cheap.

As much as I was sorry Boukies didn't make it (and I still think it had something to do with the cavernous space), I'm cautiously optimistic about the Five Points/Cookshop team opening here. It's a great group of restaurants, and maybe they can do something to configure the space in a more inviting way (booths and banquettes and some sort of features dividing the room would help). Let's not automatically slam whatever new moves int our neighborhood. I think this is a good thing.

Opening a new restaurant is like playing the lottery, you probably get wiped out, but you also have a chance to make it big but only if the place gets crowded fast. I agree with the comment about these people not understanding math, or the biggest business partner they will ever have who does not care if the restaurant makes money as long as they do, and that would the their landlord.

That's why so many places close down so fast now, once they figure out the foot traffic isn't converting to business they have burned up too much cash. They either try a new concept or move on to the next deal. Usually its the investors who take the bath, like most Broadway shows they never get their money back.

In other words: overpriced cheap food.

I can't see it working any better than what came before it. We must continue to avoid such places until some of them get it, and there's a change in the trend$.

My interest in eating out is less and less each year. It might be case of been there, ate enough kale already, or too old and cynical to get aboard the next foodie hype train. Restaurants are now like are young neighbors, transient and replaced every 2 years or so.

Am I the only one who thinks they could just as well have called it "La Cucaracha" as "The Black Ant"? If you're going to name a restaurant after an insect, you run the risk of having that associated with your food!

I'm all for good Mexican food. There are a few somewhat edible places around but nothing that I would go out of my way to eat. If it's something amazing, I'm all for it. Everything is so boring and mediocre.

Farm to who cares.