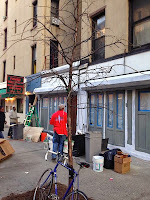 There has been a lot of activity of late at 342 E. Sixth St. … where a new restaurant named The Eddy is on its way in (one tipster heard that they'd be a soft opening on Monday).

Here's a blurb on the place via Time Out:

Our menu comes from New York's farmers markets, Long Island fishing boats, country fields and the wondrous meanderings of spirited travelers with passionate palates. We're crushing seafood, roasted meats, crazy good wine and cocktails. We present a wine list broad enough for you to come by and enjoy wine with us every night or you can order something you can't get anywhere else in the world. We're Italian influenced, American executed and entirely New York.

The Eddy's Jason Soloway wrote in to say: "I just wanted to let you know that we have had no contact with Time Out, did not write the blurb and it does not represent The Eddy. It appears that Time Out incorrectly pulled this description from another restaurant."

For a more accurate view of the restaurant, visit this post at Tasting Table.

According to paperwork filed ahead of the December CB3/SLA meeting, Jason Soloway, a partner in the Wallflower on West 12th Street, and Brendan McHale, a former chef at Jack's Luxury Oyster Bar on Second Avenue, are the principles of the new venture.

The address was previously home to the Toucan & the Lion and Mara's Homemade.
Posted by Grieve at 4:50 AM

Email ThisBlogThis!Share to TwitterShare to FacebookShare to Pinterest
Labels: new restaurants, The Eddy

Exactly what I was wondering. My best guess is that it is bro-talk for "we are excelling at the preparation of seafood, etc." Beats me.

Its the latest foodie craze, you crush the seafood into a kind of pale liquid and drink it with a cocktail or 6.

And - "the wondrous meanderings of spirited travelers with passionate palates"? WTF?

Can you say "pretentious", boys and girls? Sure you can.

Based on the use of "crazy good" as an adjective before "wine," it's probably safe to assume that "crushing" is fratbro-speak for presenting properly cooked seafood and meats in volume.

Impossible as it may be for some to believe, "wondrous meanderings of spirited travelers" is also used in the same paragraph as, "We're entirely New York!"

No way they'll survive without the parking. Damn you, bike lanes!

- Expensive (bring both of your wallets)

The meat is crushed...to serve in a hoof!

Oh dear Lord, the bro-thetic pretentiousness, it burrrrrns! Bets on how long it will be open? Don't blink now! I'd rather eat my own toes with a nice hollandaise...

As Mr. Rogers used to say, "These are the people in your neighborhood" now, people. We've lost the battle and the war.